The snow piled up on the Snow Stake at Mary Jane on May 19th.

The Central Rockies was pelted by a powerful, slow moving snowstorm on Thursday that caused traffic delays, highway mayhem and postponed  Governor Hickenloopers visit to Silverthorne for a bill signing.

The National Weather Service expects the snow to continue falling into Friday evening, with total accumulations as high as 36 inches in some areas. 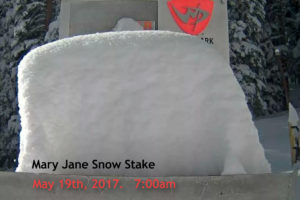 By noon, a foot of snow had fallen at the Winter Park Times office and continued to accumulate throughout the day. The Snowstake at Mary Jane Friday morning stood strong at 18+”

The central mountains were hit the hardest and Westbound I-70 was closed at the Eisenhower Tunnel several times for crash cleanup. That stretch of road was barely open for more than two hours at a time as vehicles continued to lose control on the slushy snowpack.

Berthoud Pass remained open throughout the storm with a couple of minor delays as CDOT crews worked to clear the wet heavy snow.

“Near the divide in Grand, Summit and Eagle counties this one is a lot bigger than I was expecting,” said meteorologist Joel Gratz at OpenSnow.com. “This is unusual but not unheard of. It does not often snow this much in May.”

Gratz estimated that the storm dropped nearly 5 inches of liquid-equivalent snow, enough for this single storm to account for roughly 5 percent of the regions annual precipitation.

After the storm clears out late Friday afternoon, Gratz expects cold weather and possible flurries to continue into the middle of next week.

“There could be more snow but probably not this much,” he said. “This is a pretty amazing event. But in the historical record there have been big storms through the end of May, so it’s possible that we could get another dump.”

In the backcountry, meanwhile, the storm sent avalanche danger soaring after weeks of relative stability. On Thursday, the Colorado Avalanche Information Center issued a statewide special advisory extending into Saturday.

“Backcountry riders should anticipate hazardous avalanche conditions,” the advisory read. “The potential for fresh storm slab avalanches to easily sheet off old snow surfaces will continue to increase as the storm snow drifts and piles up. Things will continue to become more dangerous as we move toward Friday. Backcountry riders can plan on very dangerous avalanche conditions to last into the upcoming weekend.”