Rise of the “Ghost Moose” Winter Ticks Take a Toll 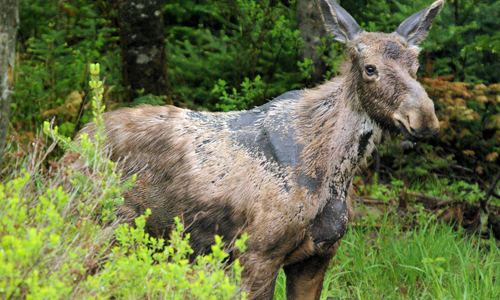 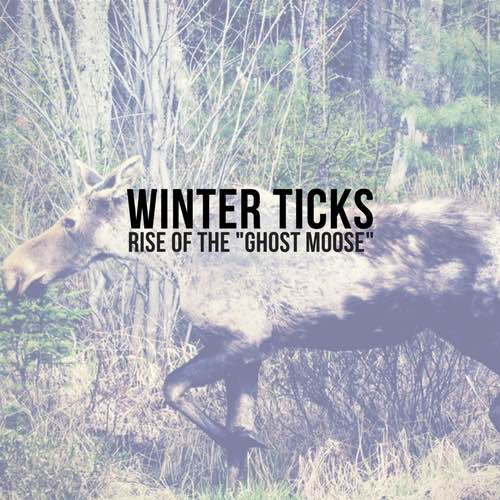 Several moose inundated with winter tick infestations have been reported around the Icebox Estates and Grand Lake areas. The moose are in various stages of fur loss and have been seen rubbing against trees, fences and homes, in an effort to rid themselves of the parasites.

Tick infestations are part of a natural cycle. Dermacentor albipictus is an arthropod especially drawn to moose and are found throughout North America. They begin their life cycle in spring, as female ticks fall from the host moose and lay eggs. By late summer, the larvae climb vegetation to a moose’s mid-chest level and await their unsuspecting host, hopping on and bringing thousands of the tiny critters with them when successful. As they grow to maturity in winter, the once tiny larvae spread en masse across large sections of the moose’s body. The ticks feast on the host’s blood throughout the fall and winter, putting the animal at risk for anemia. By March and April, the moose can be suffering greatly, until the females drop to start the cycle all over again.

Instead of focusing on eating to sustain energy in the late stages of winter, the moose instead scratches affected areas continuously, hoping to relieve itself of the aggravating hitchhikers. In our region, infestations have mostly been kept at bay due to historically frigid temperatures which serve to kill off most of the tick population.

Moose habitats are being exposed to an increasing number of ticks due to the effects of climate change. Climate change is allowing more ticks to survive the warmer winters, and expand their range into more territories. With warmer and shorter winters, more ticks are able to remain attached to the moose throughout the winter, increasing blood and hair loss. Moose are also most likely to be found dead in March or April, after the tick–related damage has been done.

Unlike many animals, moose do not grow a “winter coat”. Their fur is hollow, which keeps them warm in winter, and, their preference for 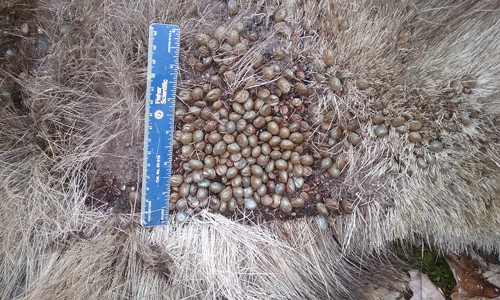 cooler climates negates a shedding period in summer which is good, because moose are unable to sweat. When the moose repeatedly scratches itself, patches of fur breakaway, leaving short, broken fur that will take months to grow back, increasing the risk of hypothermia.

According to Parks and Wildlife officials you may see an infected animal rubbing up against trees, your home or even laying in your driveway for warmth.

Tick infestation can be deadly, and if you encounter one of these unfortunate beasts, keep clear and report the sighting to the Colorado Division of Wildlife or Colorado Parks and Wildlife. While they may opt to let nature take its course, examination of the carcass can help better understand the conditions that caused the animal’s death.

What are the reasons for this decline? Among other factors, warmer winters have caused spikes in the winter tick population. Many of the moose in the areas experiencing population decline are seen covered in Dermacentor ticks— sometimes as many as 100,000 ticks. The insidious pests attach themselves to the moose and feast on their blood, leading to anemia. The tick-infested animals are called “ghost moose” because in an attempt to dislodge the ticks they scratch, bite, and rub at their fur, exposing a pale undercoat and bare skin. If the moose loses too much of its fur, it can lead to hypothermia, reduced fat stores, and a compromised immune system.

Moose are not the only large mammals that ticks attach themselves to, so it is important to consider why tick infestations have such severe consequences on moose compared to other animals. For example, deer experience tick attachment to their fur, and yet they do not experience the same deadly symptoms as moose. It has been suggested that deer cope with ticks more efficiently because deer have lived among ticks for a longer period of time, and therefore have adapted grooming strategies that effectively remove ticks. On the other hand, moose habitats have only been exposed to ticks recently, leaving moose unprepared to handle ticks and their associated damage.

Moose habitats are being exposed to an increasing number of ticks due to the effects of climate change. Climate change is allowing more ticks to survive the warmer winters, and expand their range into more northern territories. Ticks attach to moose in the fall, remain dormant until January or February, feed on the moose until March or April, and then drop off. With warmer and shorter winters, more ticks are able to remain attached to the moose throughout the winter, increasing blood and hair loss. Moose are also most likely to be found dead in March or April, after the most tick–related damage has been done. 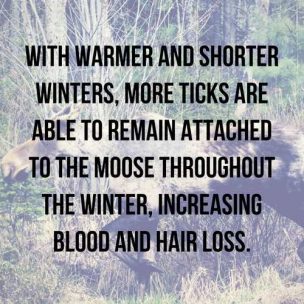 Concomitantly, Canada, a country that was never previously vulnerable to ticks and their diseases, is seeing a rising number of Lyme disease cases in humans and animals. Regions like Canada that are facing their first exposure to ticks are both less aware of, and less equipped to handle the health hazards that ticks bring to a habitat, and therefore are more heavily affected.

In addition, moose are often co-infected by brainworm, a worm parasite that is associated with severe neurological illness. The cumulative stress imposed by brainworm and tick infestation, especially for calves, may be overwhelming.

It is important that we remain aware of the tick impact on moose. Hopefully, with more research and information, climate change mitigation, and conservation efforts, we will preserve and perhaps restore populations of this iconic symbol of the American wilderness.