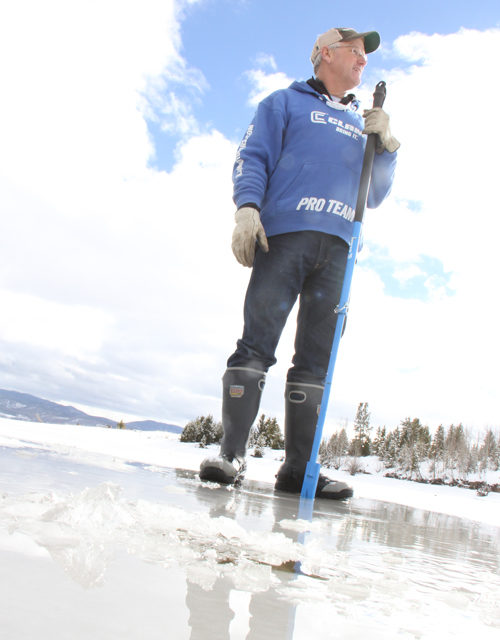 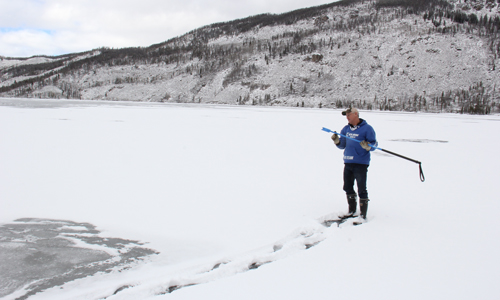 Bernie Keefe checking the condition of the ice on Lake Granby

The Annual Three Lakes Ice Fishing contest is just a couple of weeks away and Lake Granby is still holding on to pockets of open water around the lake so I thought I would reach out to a local expert and gather some intel on the Ice.

When you talk fishing in Grand County one of the first professional anglers that comes to mind is Bernie Keefe.  He has got to be one of the best storytellers on the lake so I wanted to see what Bernie had to say about the condition of the Ice on Lake Granby, one of the largest lakes in Colorado.

Bernie Keefe grew up in Colorado and was putting his Fisher Price pole to the test from his crib railing.  Early on in life he knew he had to find a way to make a living doing what he loved and over the years has done it Grand County style, working for YMCA Snow Mountain Ranch he started building his fishing empire and today says “I’m the luckiest piece of (cow dung) on the the planet.” referring to a lifelong dream that has become a full time reality.

On Sunday afternoon January 7th, we jump in Bernie’s truck and cruise down to the Stillwater boat ramp.  Without hesitation Bernie walks right out on this slushy looking ice cap that has formed in the last couple of days mumbling something about “It’s your life, check as you go!”. He turned and said “people just don’t have much common sense when you put a little whiskey in their belly and stick some cash on the line” and so he repeated a few words to live by “It’s your life. Check as you go.”

In all seriousness, I take this one to heart. Spending time at this particular ramp in the summer,I am aware of the depth but not ready to 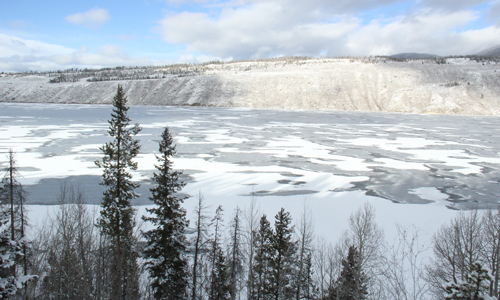 commit to filling my boots with icy water, Bernie says “run the camera so when I break through we can go viral.”  At this point it is clear Bernie brought me a long to document his demise. With a long pry bar he starts poking holes and surprisingly enough the ice is about 3” thick.

Snow, wind and temperatures all play a part in the ice conditions throughout the season and ice fishing in Grand County typically spans from January 1st to April 1st with ice into May with the right conditions.

According to Bernie the lake is usually frozen by Christmas and the latest freeze he has observed was January 10th. Keefe said, “It’s still early season and everyone is watching.” he added, I wouldn’t say it is ready but it is getting close” meaning it will be ready for the Ice Fishing Contest in a couple of weeks.  We drove around to Sunset Point and all the way back to Moraine Park with similar findings.  The Stillwater ramp area was more like frozen slush and very pliable while the other end of the lake was a solid clear ice.  From the road we could see a huge area of open water around Cutthroat Bay.

These days if you want to know if a fishing guide is telling the truth, ask them to see a picture.  Bernie has more than enough to back up his tongue and cheek story line.  He and his wife were out on Lake Granby New Years Day with no ice in sight.

On January 26th more than 1000 anglers will roll up with Atvs, sleds, high tech gear and a few stories ready to drill and drop looking for the big ones.  This annual event has brought generations of families to Grand County for 30 years and is a highlight for anglers from around the region.  Keefe said 80% will fish Lake Granby. On any given Saturday during the season Lake Granby will have 500 anglers working the augers.

If you want to get out on the ice for a day of adventure but don’t have gear or the savvy, I highly recommend spending a day on the lake with Bernie. A day out on the ice is well worth a few nickels to learn from a man that knows how to catch fish. Keefe said, “It is not uncommon to drill 40-50 holes” trying to find fish. “I don’t like waiting for them to come to me.”  he said, “I want to go find the one big dumb one!”

It’s obvious Bernie Keefe would rather take someone fishing and share a few stories than spend time strapped to a desk.  Teaching is the cornerstone of “Fishing with Bernie”.

Follow him online.  He blogs, writes, youtubes and tweets when he can.  www.FishingwithBernie.com