NSCD: Profile of an Athlete 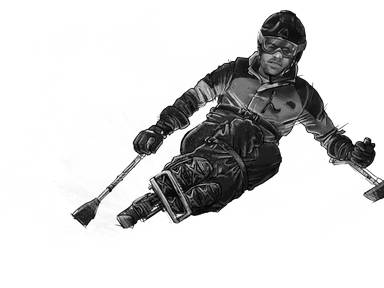 Michael Murphy’s life changed in April 2007 when he fell off a roof in college, shattered his spine, and was paralyzed. At 21, this multi-sport college athlete decided to regroup and continue his quest for education and competition. Murphy came to terms with his disabilities fairly quickly and let his abilities steer his life. Murphy said, “I am not the first to fall off a roof, become paralized, and then set some lofty goals.”

Michael had to adapt to life in a wheelchair, and through a long rehab process, had to find his “new normal”, regain his independence, and focus on life.

Despite his accident, Michael remained the competitive athlete that led him to play both football and baseball in college. In 2008 he was introduced to handcycling and adaptive sports. Michael Murphy is a 12-time marathoner with Top 5 finishes in New York and Boston. He was also featured on NBC after completing two Tough Mudder competitions in 2012 and 2013 with the help of his teammates and an off-road handcycle. Murphy said, “I love hand cycling but after a few years I realized I had gone as far as I could competitively.”  Murphy explains the dynamics of handcycling and said the sport is better suited for long lean athletes.

Michael discovered his passion for skiing while working a nine to five cubicle job in Virginia. In 2015 he left the federal government to start his speaking career, write his story, and share his message. He was still handcycling as much as possible as the gravity-fed passion for skiing ignited his competitive spirit. He found he wanted something more than a weekend getaway experience, he wanted to compete. 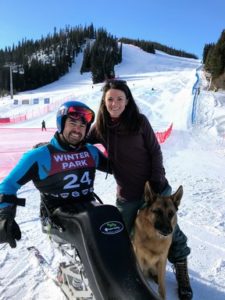 Murphy had heard about the National Sports Center for the Disabled (NSCD) while skiing in Virginia and he and his wife Casey decided to move west and start a new life in Colorado. Living on the front range would allow them to enjoy the mountains and create a home base for the family and establish a career path they could follow with a competitive outlet a few miles from home. “Self-confidence is critical for success. When you trust your capabilities and potential, it’s much easier to achieve your goals,” said Murphy.

The competitive program offered by the NSCD is what drew the Murphys to Colorado, and Michael joined the ski team three years ago to take his passion for the ride of a lifetime. Seeing podium athletes whose drive and determination eerily matched his own, Michael said “Why not me?” before setting his loftiest of goals – the Paralympics. “Papa Smurf” as his teammates call him is still in the fight. Murphy said, “I have been at this for over 10 years and I look for abilities, not disabilities.” Murphy commutes to Winter Park 2-3 days a week to train with his team and coaches. “I don’t have much obliques and only two abs, so the sit ski is my focus right now.” Murphy said he is still tweaking his setup and every day is a learning experience. Murphy attributes his recent success to his coaches and teammates. “I am amazed at the time and energy our coaches and teammates put forth week in and week out. The dedication and commitment is truly amazing.”

Off the slopes, Michael Murphy has a communicative gift to connect with people. “I can talk to complete strangers and connect with just about everyone.“ He has been sharing his story and writing his memoirs to help people realize life is full of adversity. “Each of us is journeying down a particular path in life, and you better believe that path will have roadblocks and setbacks. Some will briefly force you off course, others will completely reroute you, permanently,” said Murphy.

Michael Murphy engages audiences with his story. “My post-accident journey has taught me many lessons.” His presentations convey some of his lessons and relay how you too can survive setbacks by having the right attitude and effort, setting goals, and pursuing your passions. “Adversity is an inevitable part of life that can occur with or without warning therefore it’s critical to be prepared when it does,” said Murphy.

Michael and Casey are expecting, quite literally, and parenting will surely become another puzzle piece in his journey.  For more, follow MichaelMurphySpeaks on Instagram and the web.