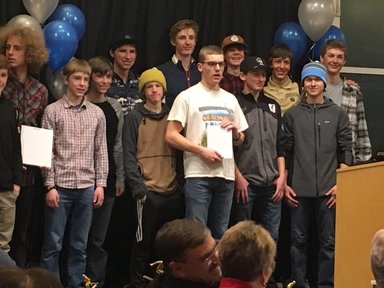 The Town of Durango, Durango High School and Mother Nature pulled out all the stops for the CO State High School Skiing Championships on February 21 and 22. The event kicked off with a lighted ski down and opening ceremonies at Chapman Hill in downtown Durango. Each team was represented by a student athlete skiing down the hill with multi-colored light wands while fireworks went off above the crowd. Senior Brendan Droll from the Alpine Team represented MPHS.  The celebration was a glorious start to a couple of days of challenging skiing.

This season an impressive 85% of the team qualified for the state championships. The team attributes this to the excellent coaching over the past two seasons by coaches Mike Lohman and Dave Cleveland which focused on a combination of solid base training, technique drills and tough interval workouts. Notes parent Maire Sullivan, “In particular for the boys, significant skill and strength improvement resulted in a “fast pack” which was constantly pushing one another making for many exciting finishes to see who would come out on top that week”.

Thursday’s classic race began with a chevron start, a mass start with skiers positioned based on how they performed throughout the season. Luckily a snow-free window opened up for the race. However, the earlier snow made skiing slow with the skiers not able to get much glide or benefit from double poling. Combine this with the rolling trail and it was definitely a classic ski technician’s course as opposed to one favoring double polers which has been the general trend in modern classic races. 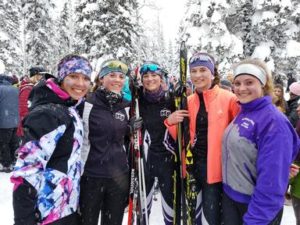 The women’s team finished mid-pack in 7th overall for the classic race. Unfortunately several racers were caught up in a big crash during the mass start and had to play catch up over the 5 km course.  Senior Lizzy Barker led the MPHS women in 11th in a time of 20:35 with Elizabeth Hammond in 27th (22:18) and Maggie Barker in 49th (24:24) also scoring points. Close behind were Katelyn Cimino in 50th (24:34) and Selena Stoncius in 55th (24:55).

By Friday’s skate race, 24 inches of snow had fallen in a 24 hour period. Rather than the beautiful, firm corduroy that the athletes usually benefit from, the trail surface was soft and deep requiring extra effort in every stride. Generally, skiers skate a course faster than they can classic ski, however, with the difficult snow conditions many competitors had a slower finish time for this race.

Again leading the MPHS women was Lizzy Barker, finishing 12th in 20:38. Freshman Elizabeth Hammond had a season-best performance finishing 16th in 21:25 and Maggie Barker scored points in 43rd (23:46). Senior Katelyn Cimino finished her MPHS Nordic career with an outstanding performance as well (26:23). The women finished 6th out of 14 teams.

According to Head Coach Mike Lohman, “We could not have done this without amazing support from all of our parents, volunteer coaches, Nordic Comp Center head coach Isaiah St. Pierre, team managers Lisa McClain and Jonny Siefken, race volunteers, Snow Mountain Ranch Nordic Center staff, Sarah Miller at MPHS, our bus drivers and many more”.

With only 5 seniors graduating and a strong pack of freshman coming in next year, the team looks forward to further improvements and podium challenges next season. The team will hold an end-of-season banquet on February 28th,  where they will say farewell to seniors Elizabeth Barker, Isaiah Callarman, Wil Cleveland, Katelyn Cimino, Aaron Sanders and team manager Lisa McClain.

Story and photos by Coach Mike Lohman and Karen Fletcher