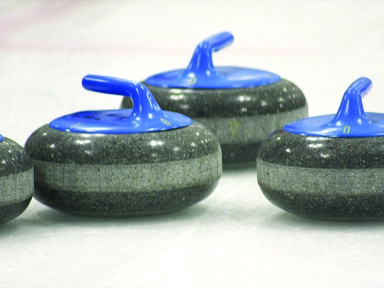 Born in Scotland’s dreary winters, the sport of curling dates back to the 16th century about the time fine Scotch whiskey was crafted, so naturally they go hand in hand, right?  Wait, that’s another story! 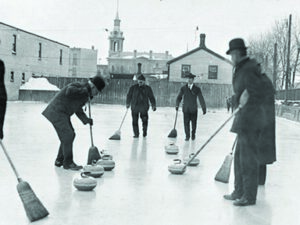 Considered one of the world’s oldest team sports, early curlers gathered on frozen lochs and ponds to coax 40-plus-pound granite stones across the ice and into a target with the help of what, at least back then, were actual household corn brooms.

Curling is named after the unique turning that occurs at the end of the stone’s path on the ice. The curling stone, or rock, is made of dense polished granite from Ailsa Craig, Scotland, and in the Olympics, each rock weighs 19.1 kg (44 lbs). The bottom of the stone is concave so that only the outside ring, called the running band, is in contact with the ice. This minimizes the friction and allows the stone to slide farther. Corn brooms have given way to push brooms, which have since been replaced by the nylon sweepers with swiveling heads and fiberglass handles that you see today’s curlers using to laboriously slick the path toward their circular target, or “house.”

Austin DeGarmo, Fraser Valley Metro Rec District, Parks and Athletics Manager said, “We partnered with NSCD to purchase a set of curling stones, brooms and accessories a couple of years ago.” DeGarmo said, the league started out with six teams and has grown to a dozen with more than 60 participants.  Several teams have developed some of the skills and nuances of the sport to excel. “Most people don’t realize, it is a highly technical sport.”

Lynn Hanna, captain of the Low Hanging Stones, said,  “ It has been a blast!  Many of the participants have never had any experience curling”.   Hanna added, “Some players have really excelled and have studied the ins and outs of the game, and much thanks goes out to the Denver Curling Club, Tom Whitman and Bob Mogue. They spent their time and energy helping us get started and learning how to do it right.”

Curling stones are a custom piece of granite, costing as much as $1,000 a piece. A set consists of 16 stones. DeGarmo said, “We hope to continue growing the league.”  The rec district currently has two sets of stones and DeGarmo said, “The Icebox can handle 4 sheets inside the facility.”  A curling sheet is the term used for the playing surface.  The sheet is a rectangular area of ice, carefully prepared to be as flat and level as possible, 146 to 150 feet in length by 14.2 to 15.7 feet in width.

If you’re like the majority of Americans you may not understand the game but whatever your level of understanding might be, Hanna wanted to extend the invitation to everyone, “Come out and catch some of the action, maybe learn something about the sport and maybe start your own team. It’s a blast!”.

The Fraser Valley Curling Championship is going to be held early April this year.  Stay tuned for more information as they close out the regular season.  The Icebox Arena has heaters installed over the bleachers if you want to come out and spectate.  A complete schedule can be found at:  quickscores.com/fraservalleyrec.