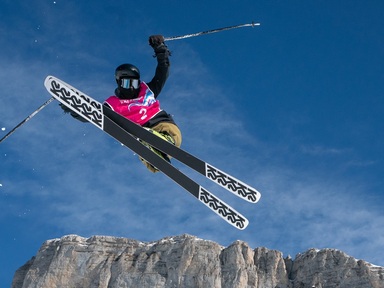 It was then that he watched freestyle skier and friend Birk Irving, who is also from Winter Park, win gold in the men’s halfpipe competition.

As Carey geared up for Tuesday’s halfpipe competition in Lausanne, all he wanted to do was make his hometown proud by bringing home another medal from the Youth Olympic Games.

Following three runs, Carey did just what he set out to do.

“The last Youth Olympic Games was four years ago, and my friend from Winter Park, Birk Irving, was in it,” Carey said. “He got first place, which was insane. Everyone was hyped in Winter Park. To come back four years later and take a medal home to Winter Park is super cool.”

After two morning qualification runs, Carey secured his spot in the men’s halfpipe finals. He opened finals with a powerful run for 84.00 points, putting him in second place.

“Going into finals, I was going to do a more mellow run [for the first run] just to get points on the board, but I figured points don’t matter unless it’s ‘go big or go home,'” Carey explained. “I threw down one of my hardest runs first, landed really well, got a decent score so I was feeling confident.”

Carey let the confidence carry him down the halfpipe for his second run, improving his score to 86.00 points to keep him sitting in second.

“I went back up, did the same run – but did it better – so that went really well. I was going to try to step it up the last and final run to hopefully take over the top, but it just didn’t go to plan, but I’m still stoked.”

While an off-balance landing saw him lose momentum on his third run, Carey was still sitting in second place with 84.00 points, behind Canada’s Andrew Longino. Carey had qualified second for finals, which meant he had to wait for one last rider to go. That last rider just so happened to be New Zealand’s Luca Harrington, who was sitting in third place and eyeing Carey’s second-place position.

“The last guy had to go and he’s really good,” Carey said when explaining the nerves of waiting for Harrington’s final score. “I was waiting for his score because he landed a super nice run – I was waiting and waiting – and the announcers were making it more hectic. The score came in and I was still in second, so it was a really nice feeling.”

Carey will enjoy this feeling for the remainder of his time here in Lausanne, and then he’ll return home to Winter Park with a medal in hand, just like Irving did four years ago.

“It honestly feels amazing. Since I was a little kid, I always wanted to be on the U.S. team. Coming here and getting second place for the U.S. is really nice.”