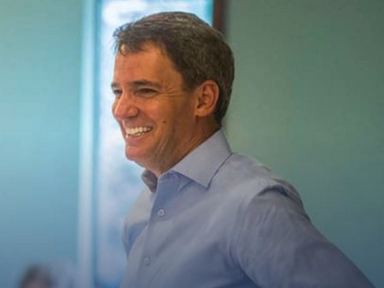 According to the latest polls, Andrew Romanoff is the leading Democrat in contention to replace Colorado Republican US Senator Cory Gardner. Romanoff was at the August 19 Grand County Democrats meeting at the Grand Elk Grill in Granby to hear what locals had to say and to share his story.

Romanoff won four terms in the Colorado House of Representatives and spent two terms as speaker of the House. During his term in office, he proposed laws to protect the environment, address affordable housing availability and to help victims of violence and sexual assault. He garnered respect from both sides of the aisle. Most recently, he was CEO of Mental Health Colorado.

During his time here in Grand County on Monday, he contrasted his positions and approach with those of Gardner. One topic he emphasized was that his approach to guns involves “common sense” regulations that don’t take guns from hunters and responsible citizens. Rather, he supports limiting assault-style weapons and allowing law enforcement to use due process to temporarily impound guns in the possession of people likely to harm themselves or others. Some in the audience pointed out that 100 years of licensing cars and drivers hasn’t led to the government’s elimination of driving even though we do suspend the licenses of dangerous drivers.

According to Romanoff, Gardner’s acceptance of money from the NRA has discouraged him from supporting even modest measures that most Americans, including gun owners, support. Similarly, he says, Gardner’s financial support from the oil and gas industry creates a relationship Romanoff wants to avoid by refusing all corporate financing of his campaign.

That’s a challenging strategy for Romanoff in one of the most hotly contested Senate races in the country, yet he is leading the Democratic field.

Clearly, the Republicans are worried. In an interesting moment in a packed room, Romanoff pointed out one Republican party employee. His job is to video every event Romanoff attends and capture anything which could be used in future Gardner ads.

Romanoff was asked about the possible entry of former Colorado governor John Hickenlooper into the race now that he has dropped his presidential bid.

Romanoff  grinned and simply suggested that Hickenlooper had often said he wasn’t interested in the Senate and was “not cut out to be a senator.” One attendee pointed out that Eric Sondermann, a well-known Colorado political observer and commentator who describes himself as Hickenlooper’s “friend and sometimes collaborator” discouraged Hickenlooper’s entry into the race.

One audience member asked about the GOP’s efforts to brand Democrats as socialists or communists. Romanoff responded with a quip saying anyone who knows about the Russian Revolution knows how the Romanoffs feel about socialism and communism. After the laughter died down he added that he didn’t think they were actually part of his family.

Lots of Democrats are interested in replacing Gardner and see an opening. Colorado’s US Senate race is sure to be exciting.