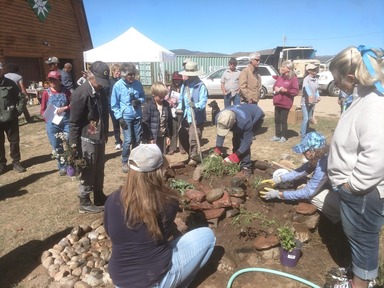 This past week we have had both local and global events that have merged politics with social and environmental concerns.  There was Constitution Week, the Global Climate Strike and United Nations Summit, the Permaculture and Composting Workshop and the Innovators Energy Summit, among other things.  How do these subjects converge?

Permaculture is the philosophy that balances environmental, social, and economic ethical principles.  In our capitalistic republic, it seems as though economic factors have dominated the decision-making process since the 1980’s.

In politics, the permaculture ethics would balance the benefits of social, environmental, and economic needs at a local, national, and even global level.  Our government seems structurally unbalanced, with economic incentives out-weighing social and environmental considerations.

For example, it is hard to imagine that if these considerations were currently balanced the government would be able to spend $716 billion in 2019 on our military (www.washingtonpost.com).  The Military Industrial Complex creates jobs, but so does production of any anything, wind turbines, solar panels, electric cars, etc.  We have the strongest military in the world by 7 times the closest rival, so we do have choices that would not damage our national security.

The 2017 tax cuts that largely benefited the wealthiest and corporations is adding $1 trillion to the deficit over ten years, and cutting $1.7 trillion in social programs including: Medicare, snap food assistance, disability programs, social security and Medicaid in the same time frame (www.npr.org).  This on top of the largest wealth inequality in the country since the great depression.  From 1989 to 2018 the top 1 percent increased its total net worth by $21 trillion. The bottom 50 percent saw its net worth decrease by $900 billion over the same period (Bruenig. June 14, 2019). Locally, the Grand County Economic Summit last week stated that the cost of housing, child care and health insurance has risen by three times in that time frame while wages have remained stagnant.

By balancing the permaculture ethics in decision-making, economics would be more fairly shared, innovation would benefit the environment, all of which benefits society.  When one aspect is disproportionally driving decisions, the other sectors suffer.

Local politics are able to do a better job of being able to balance these needs.  The solar farm going into Mountain Parks Electric grid with the assistance of Grand County is a good example of shared interests and investment.  Affordable housing projects are another important topic for this county, which benefits both the social and economic interests.

What do we do at our national level?  How do we encourage a more just and balanced society that equally values environmental, social, and economic factors?  We must engage more citizens and limit corporate profit, which is not trickling down into higher wages.

This may be polarizing, but a few of the low hanging fruits that we can use to change include overturning Citizens United that the Supreme Court ruled corporations, lobbyists and private entities can spend unlimited amounts of money on elections, overturning 100 years of precedence.

Secondly, the Electoral College was originally created to limit the voting power of African Americans, but has since proven to dismantle just presidential elections.  In 2000 and 2016 the presidential candidate with the most popular votes did not win. The United States is a federal republic with representatives, in which the representatives should be proportional with the will of the people.

Lastly, the structure of Congress needs to be reevaluated.  Mitch McConnell was elected by less than one million voters in Kentucky, yet decides every piece of legislation that reaches the Senate floor for the entire nation. He has blocked over 100 bills from the Senate that passed the House of Representatives.  That is not fair representation and we must end the bipartisan nature in which Congress can no longer work together to get things accomplished for their constituents.

But, everyone needs to vote.  In 2016, only 57% of eligible voters cast a ballot (www.pewresearch.org).  We the people need to take responsibility, become educated, and actively participate in our government in order to hold our representatives accountable to us, not their funders.  It happens to be Voter Registration Week, register here: https://nationalvoterregistrationday.org.

The bold teen activist, Greta Thunberg, just told the world’s leaders, “People are suffering. People are dying. Entire ecosystems are collapsing. We are in the beginning of a mass extinction. And all you can talk about is money and fairytales of eternal economic growth. How dare you!”