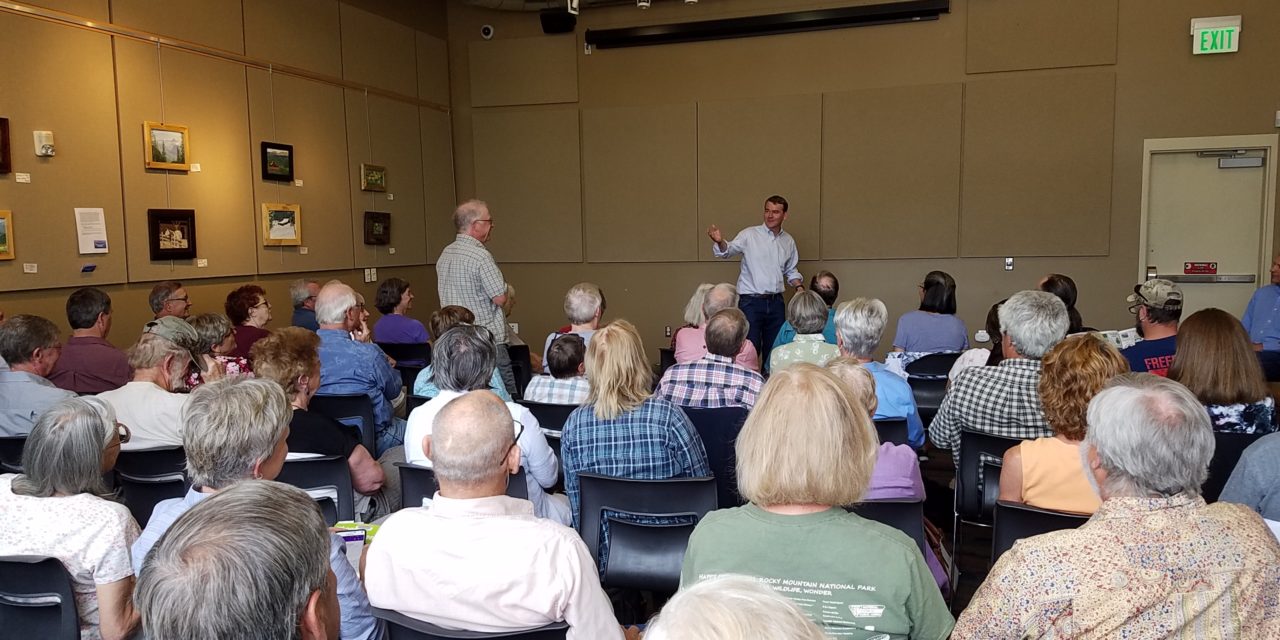 On Wednesday afternoon, US Senator Michael Bennet (D-CO) took questions from the standing-room only crowd assembled at the Granby Library. Earlier in the week, Bennet had also made stops in Steamboat Springs and Summit County, listening to his constituents’ concerns and responding to them as he was able.

Attendees had plenty of items they wished to discuss with Senator Bennet, and the event went past the designated hour time slot by nearly 30 minutes. Throughout the Q&A session, Bennet’s passion for the American people was evident.

Commissioner Merrit Linke introduced the Senator, and Bennet moved directly on to the audience, requesting they ask the questions that are important to them. He took questions “boy/girl” to keep a balance in the field.

Easy-going and approachable, Senator Bennet discussed the two Wilderness Bills he recently sponsored, the Continental Divide Recreation, Wilderness and Camp Hale Legacy Act and the San Juan Mountains Wilderness Act which were both introduced earlier this year. He said “I tried very carefully to reflect a strong consensus of the people of Colorado” in both bills.

On agriculture, he told the crowd that it was one of the first committees he joined when he arrived in the Senate. He said agriculture is a huge part of our economy and the committee is able to work better together because “while we have regional differences, we do not have partisan differences” which allows them to get the work done.

A participant of the VA Choice Program told Bennet she’d worked two years to get appropriate referrals for specialty visits in place. However, as a result of the recently approved VA Admission Act which consolidates community programs, she’d just received notice from the VA that the referral authorizations expire at the end of September. Bennet recognized her frustration, requested photocopies of her VA correspondence and gave her a contact name and phone number to assist with her dilemma. “No one should have to jump through hoops to get healthcare”, said Bennet.

When asked about single-payer healthcare, Bennet told the group he believed strongly that the country should have universal healthcare. “It is essential for us as a country to have access to universal healthcare”, he said. Describing his preferred plan, “Medicare X”, which creates a public plan administered by Medicare (at reduced administration costs). He said he’d like to launch the plan in rural America, where the need is greatest, and pool the numbers to mitigate risk. He said his plan differs from Bernie Sanders’ proposed “Medicare for all”, because it would not require people enrolled on an employer’s health plan discontinue their coverage and enroll in this plan.

On the topic of school safety, Bennet stated “It is deeply unfair that children have to go to school worried that someone is going to blow up or shoot up their school”. He told the crowd that, so far, Congress had made zero progress on this. “We are accepting so many things we shouldn’t accept on so many dimensions.”  Tightening background checks, limiting number of clips and improved mental health services were areas he suggested can be improved.

The Student Loan challenges students are facing today was another issue raised, and Bennet said “It is a travesty what we have done to the next generation”. Looking back 20-30 years ago, he said education costs were not nearly as high as they are today, and, state government had more money to spend for educational support. Now, costs are astronomical, and state government funds are spread so thin that there’s not enough to support it at the previous levels.

Bennet talked about the environment, water and land conservation and the Clean Air and Water Acts, which were both signed by President Richard M Nixon. “There is a group of Republicans in Washington DC that want to destroy all of it, and we shouldn’t let them do that”, he rallied.

“There are lots of opportunities for us to come together as a country”, said Bennet. “What’s important is for us to move forward.” He went on to say “Mobilizing in a bipartisan way is the way we will get things done”. We need to find a way to work together and compete in the world. “We are the first generation to give the next generation less.”

In the end, the message he conveyed was the importance of the vote. Stressing the importance, he encouraged the folks in the audience to help get high school students registered. “We can’t run this country with only 50% of the population voting”, said Bennet. “We have to remake our politics and it starts with people like you.”