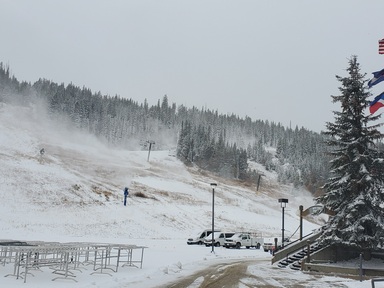 With a healthy dose of natural snow this week and favorable weather conditions ahead, Winter Park Resort has begun snowmaking efforts for the 2019/20 ski season.

Last summer (2018), Winter Park invested $4 million on new pipes, snow guns, and compressors, to enable more efficient snowmaking efforts. Due to other construction projects on mountain last year, not all of the new snow guns were fully utilized in pre-season snowmaking.  This year, all the new equipment will be operating at full capacity, meaning more snow on the mountain in less time. With 20 additional low energy permanently mounted stick guns on the edge of the trail systems and a permanently mounted fan gun, Winter Park will have plenty of snow for early season skiers to ride.

Along with the snowmaking system improvements, the Mary Jane Territory is getting a much-needed lift replacement upgrade for the 2019-20 season. The resort has replaced the Sunnyside Lift and crews are preparing for final inspections and load tests in the next couple of weeks.  Sky Foulkes, CEO for the Resort said, “The crew has been hard at it this summer and if all goes well it should be ready to go for the opening day of the Jane.”

The old Sunnyside Lift was a three-person fix-grip lift installed in 1989 and the new $6 million dollar Leitner-Poma detachable high-speed six-pack lift upgrade will increase uphill capacity for the Sunnyside by 800 people per hour according to resort officials. The increased uphill capacity should decrease the ride time from roughly eight minutes to just under four minutes. Foulkes said, “We needed to do something with that old fix-grip and this improvement will really enhance the  Parsenne Bowl experience.” 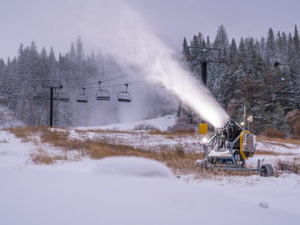 The snowmaking system and lift upgrade are part of a $16 million dollar investment package that focused on summer and winter amenities in the last year.

Mother nature has provided wave after wave of early snow but resort officials would not comment on an early opening at this point. It has to be part of the marketing conversation as more resorts open the lifts on a new snow season.

Winter Park is scheduled to open for the 2019-20 season on Wednesday, November 13, weather permitting. For more information, please visit: www.winterparkresort.com.