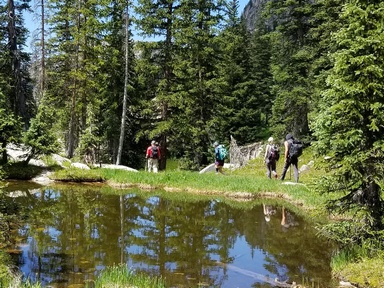 On August 4th at 3:30 pm, a call came in for a medical emergency involving a hiker that was unresponsive. The subject was reported to be two miles up the trail.

GCSAR volunteers, along with Grand County EMS and two Grand County Sheriff officers, climbed approximately 1.5 miles up the trail to the subjects location. The hiker, a 57 year old male, was pronounced dead on scene by EMS personnel.

Eleven volunteer members of GCSAR and two members of the Sheriffs Office took turns helping to bring the man down the steep rocky trail on a litter. Three GCSAR members remained at the base to run operations and communication for the mission.

The team got back to the trailhead at 9:00pm where the subject was transferred to the Grand County Coroner. The man has been identified as Jeffrey Honert of Arvada. Officials do not yet have an official cause of death.

Earlier on Sunday, August 4th, around 2:00pm, GCSAR volunteers responded when a New York man, backpacking by himself, was lost on the Roaring Fork Trail near Stone Lake. GCSAR talked and texted with the man to try to help figure out where he was and to help guide him back to the trail.

Around 4:30 pm the hiker texted that he was still lost and was going to camp at Stone Lake. He had camping gear and iodine tablets, but was getting low on food.

On August 5th, before 7 am, four members of GCSAR hiked approximately 7.2 miles up the trail. They were able to locate the man and help him back down to the trailhead before 3 pm. The hiker did not have a GPS or compass and the map he had didn’t have enough detail for navigation.

There have been search and rescue calls in the Hell Canyon drainage in the last couple years due to the fact that some of the trails in this area are well advertised on the internet, but not well maintained. It is easy to get off trail in steep terrain.

GCSAR recommends research on the trails before heading out into the wilderness, have a good map and compass, bring your GPS, and bring extra food and water. Do not depend on cell service in the area.

GCSAR volunteers are proud to provide mountain rescue at no charge. 24/7/365. To learn more, visit grandcountysar.com.