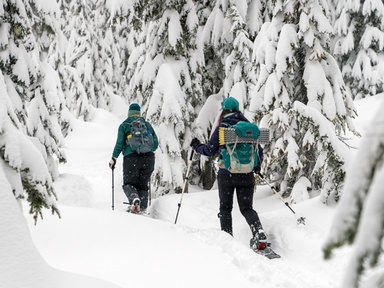 As the snowbanks pile up to monumental heights, and snow-covered streets are narrowed to tighter lanes for travel, we are starting to look more like a classic mountain town, ensconced deeply in Ullr’s wintry embrace. The trails, likewise, are laden with a thick covering of snow, with the pathway reduced to a slim, deep, threadlike trench winding its way along whatever summer path lies deeply below it. Snowshoers often dominate the traffic pattern, making a slightly more narrow and winding aisle than is typical of trails blazed by skiers.

Off the packed snow, however, skis of a typical backcountry touring footprint (such as the classic Fischer E99s) may hold a traveller aloft better than the modern, smaller snowshoe, designed with the packed trail in mind. There is fresh snow on the surface of the snowpack with a middle layer of dense snow. We found recently that our friends on snowshoes were breaking through this middle layer, while our skis held us up above that denser layer. Its all about the weight-to-surface area ratio when it comes to breaking trail through, or hopefully at the top of the unpacked depths. The smaller snowshoes allow for less awkward walking pattern, especially in “urban” areas where there are plenty of people to pack the trails beforehand. But the larger “Old School” snowshoes would do a better job of allowing one to go off exploring when the snow is deep.

While it is helpful and appreciated to have the trail packed in advance, the snowshoe trail presents a unique challenge to skiers who are following in snowshoers’ paths. When climbing uphill, snowshoers need not change their gait, so the trail is uniformly narrow, going on flats as well as up and down hills. The skier, however, unless climbing skins are affixed to the ski’s base, must use alternate techniques to climb without slipping back. The herringbone pattern with skis turned out, tips apart and tails together is the classic method for ascending a hill on which the skis would otherwise tend to slip backwards. On steeper hills, the skier sometimes turns across the trail and steps sideways with a side-stepping pattern. Neither of these techniques is easy with a narrow trail that is lined on both sides with steep walls of powder.

A hybrid approach for tackling this situation, which is seldom discussed in XC ski lessons, is the forward sidestep. To meet the challenge of a narrow trail going uphill, the forward sidestep is performed by picking a side, usually the higher side if there is one, then lifting the tail of the ski on that side high and turning it outward, toeing in so that the ski rests partially on the wall of snow to the side. The tip remains in or near the packed surface, while the tail is out in the deep. The trailing ski is then brought alongside the ski that is now angled appropriately to the trail and the slope of the hill so that it won’t slide back. This process is repeated, sometimes changing sides to accommodate side hills. This ends up packing a wider trail that will be easier for skiers who follow to use whatever technique works better for them.

Skiing downhill in the snowshoer’s rut can also be exciting, entertaining or death-defying, or all of the above. This is where the classic Telemark turn comes into its own. As a skier picks up speed starting down a hill, control can be achieved by steering into the powder at the sides of the trail, With heels free, hitting the increased resistance can result in a rapid face-plant unless one ski is advanced forward and some weight is reserved for the trailing ski. Using this method, the skier can turn from one side to the other, skis angled slightly to each other to scribe graceful arcs on alternating sides down the trail.

You will be able to put some of these techniques to the test by participating in the Ranch to Ranch ski tour that goes from Snow Mountain Ranch to Granby Ranch on February 29. This was rescheduled due to one of the winter storms that provided the conditions that have made this such a good year for XC BC travel.