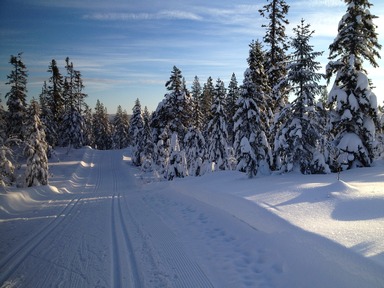 There is a LOT of snow out there, and it just keeps coming! Weather disturbances have just lined up to drop their load of white fluff upon us with little pause for us to come up for air. Between the skiing and the shoveling, snow sliding devotees have been kept busy trying to keep up with it. The snowpack has been hovering below the aspen brach out my window that marks the arrival of typical mid-winter snow depths, but now that branch is well covered beneath a thick coating of the magical crystals that let us float above the frozen ground below. And floating is what powder skiing is all about. Now is the time that those wide skis that torque the knees on hard-packed slopes come into their own, allowing us to waft downhill like falling leaves, with the sensation as near to flying as you can imagine while being on your own two feet. Snow billows up like cold smoke around our passage as we drop through glades that have to be steep enough for us to overcome the resistance that knee deep and deeper snow provides.

Trails are buried deeply with their trail signs half covered and branches that are usually high overhead must be ducked under to gain passage. Travelers have remained single file behind stalwart trail-breakers, leaving a knee-deep trench, for venturing off trail onto the unpacked layers is both exhaustingly laborious and time consuming, and will be until the snow has had a chance to settle or be transformed by wind or sun. Probing the snowpack around low lying mountain areas has revealed a depth of over 40” which amounts to a ski pole and half an arm. Falling or getting mired down in this kind of snow can sap your energy in no time. A good trick to know for these conditions is that holding both poles at the mid-shaft, crossed in one hand can provide enough support to push against as you flounder to work your way out of a powdery pit.

Temperatures have fluctuated considerably through the various periods of snowfall, leaving some thicker powder along with some of the light and fluffy stuff. The mid layers of the snowpack have a denser stratum that conceals a very deep foundation of poorly consolidated snow, setting up the unstable conditions that Colorado Backcountry skiers are so familiar with in mid-winter.

With trail-breaking being such a taxing endeavor, it will take some time before the packed trails are punched deeply away from trailheads. The best bets for getting any distance underfoot is to try the popular routes that see plenty of traffic, or bring along plenty of friends to split the burden of packing down the lofty snowpack into a firm supportive surface, and of course, put on your widest skis!