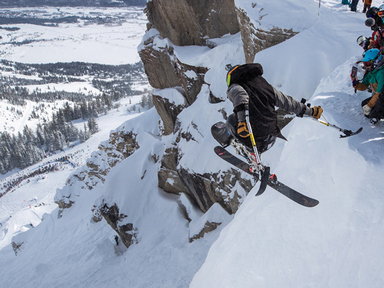 Skiers and riders will travel the world to test their grit and showcase their progressive style at the legendary run in hopes of greatness. At the end of the day, just one man and one woman will be crowned the King and Queen of Corbet’s.

A little over a week ago a collection of top athletes came together for the second annual Kings and Queens of Corbet’s, Jackson Hole’s unique freeride competition set atop North America’s most revered proving ground. This year top riders and skiers alike flocked to the stronghold of Jackson’s crown jewel, vying for a piece of history And some serious cash $36,000 was the cash purse with the King and the Queen taking home $10,000 each.

The bold clashed with creativity as two-dozen guys and gals hurled, curled and launched themselves into the deep white abyss, scoring sky miles along the way. Big drops, floating twists, and double backflips were just some of the stomach-churning feats put to the test. Some exploded upon impact, others eeked out a landing, and some put P-Tex to powder by what us mere mortals would call the grace of God. But it was a show.
Travis Rice’s run at Kings and Queens of Corbet’s 2019 might have been some of the finest snowboarding ever seen, but the real hero was no doubt Trevor Kennison, who chucked it off the lip aboard his sit-ski.

Kennison suffered a life-changing snowboarding injury in 2014 when he crashed on a jump in the backcountry of Vail Pass, Colorado, landing on his back. He has worked with the High Fives Foundation ever since, and competed in the ski race events with dreams of entering the 2022 Paralympics.

Needless to say, Corbet’s contest was a pivotal moment for Kennison. Talk about pure, unadulterated stoke. He has become an overnight phenom and celebrity in the freestyle circuit. Competition Director, Erik Petersen of the National Sports for the Disabled said, “Trevor is a great skier.  If we can keep him on the ground he can he has a real chance to sit on the podium at every race he enters.” Petersen added, “He is exciting to watch. Definitely loves to fly!”

Sending Corbet’s is a maneuver which requires a lot of confidence and perhaps a little bit of insanity. Nuking into Corbet’s on a sit-ski, on the other hand, is a whole different level.

Watch a collection of Trevor Kennison clips including multiple angles as he launches himself in Wyoming, one of the most impressive videos to come out of Kings and Queens competition in Jackson Hole, this year.  Maybe you saw it on television this week as Trevor Kennison made ESPN’s top 10 Plays of the Week. If not check out multiple runs and angles on Winter Park Times homepage.

Kennison didn’t bring home a big check but he caught everyone’s attention and was awarded the Riders Choice Award in honor of the late Bryce Newcomb who carried the essence of skiing with him every day in the mountains.

Unlike traditional comps, Kings and Queens is a peer-judged event, which means the athletes are judging one another—style, guts, performance—not some panel that may or may not have the same intimacy with the event itself. “It creates this cool atmosphere of pushing the sport in different ways than traditional judging,” says Caite Zeliff, last year’s Queen.

Kennison will be skiing this weekend at the 44th annual Wells Fargo Ski Cup.

Thanks to Jackson Hole for sharing this storyline and quotes.  Photos Courtesy NAlegre photo