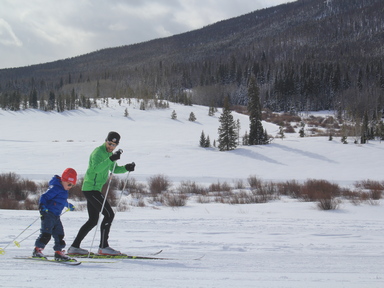 You might say March came in like a lion, with a storm that left us with 22” of new heavy snow that was the most significant disturbance of the season thus far for the Colorado mountains. It resulted in historic avalanches that closed interstate highways, and left us locally with a fatality in the backcountry skiing community.

If that wasn’t enough today a “Bomb Cyclone” rolls up on Colorado like a Gulf Coast hurricane.  I felt like we should have named it. This weekend the backcountry will be very hazardous to say the least.

It could not and still cannot be assumed that you are immune to being affected by some form of event involving snow and gravity, particularly when you are in the vicinity of steep slopes that hold a load of snow up high. If an interstate highway can be buried, so can flat trails near steep hillsides. Being able to recognize and avoid potential avalanche slopes as well as their runout zones is key to staying safe for all backcountry travelers. One local trail, the Jim Creek trail for example seems flat and safe up to a meadow where many groups stop for a snack and to admire the scenery of the opposite side of this box canyon-like valley. In reality, that clearing on the south side of the creek was created by previous avalanches that careened down a feature on the north side of the valley called the ’S’ chute. If you have skied as far as this meadow, you have crossed two potential avalanche runout zones. During periods of high danger such as this, it is well worth considering a larger margin of safety around runout zones like this.

All season we have experienced a sugary bottomless snowpack that had little cohesion or support. As this grew in depth it became a flounder-pit to those who attempted to traverse it on most any type of nordic ski or snowshoe. The March storm placed a heavy wet layer on top of that unconsolidated base, creating the scenario of extremely unstable conditions, with a weighty, dense layer resting on an airy, ball-bearing foundation, prone to crumbling apart. On flat ground, the settling of the snow is merely a whoomph, unsettling to the mind, but of little consequence. Put that on a slope and after the whoomph, the snow continues downhill, gathering speed, mass, momentum, and power. March and April can be the snowiest months for Colorado, and with each new storm, eager skiers will want to get out into the powder. Hopefully those in the backcountry’s mountains will consider what lies deeply buried beneath their slope before pushing off.

For the nordic traveller, the dense snow layer has offered an ironic reprieve. Conditions are now such that one can get up onto and stay on or near the top of the surface of the snowpack. This may depend on the conditions of the day and timing with the daily temperature fluctuations. Naturally this will change with new snowfall of any significant depth. While skinnier skis and snowshoes are now frequently adequate for over-un-packed snow travel, walkers will find travel off tracks nigh on impossible with post-holing up to one’s waist the inevitable result.