Avalanche: Know before you go! 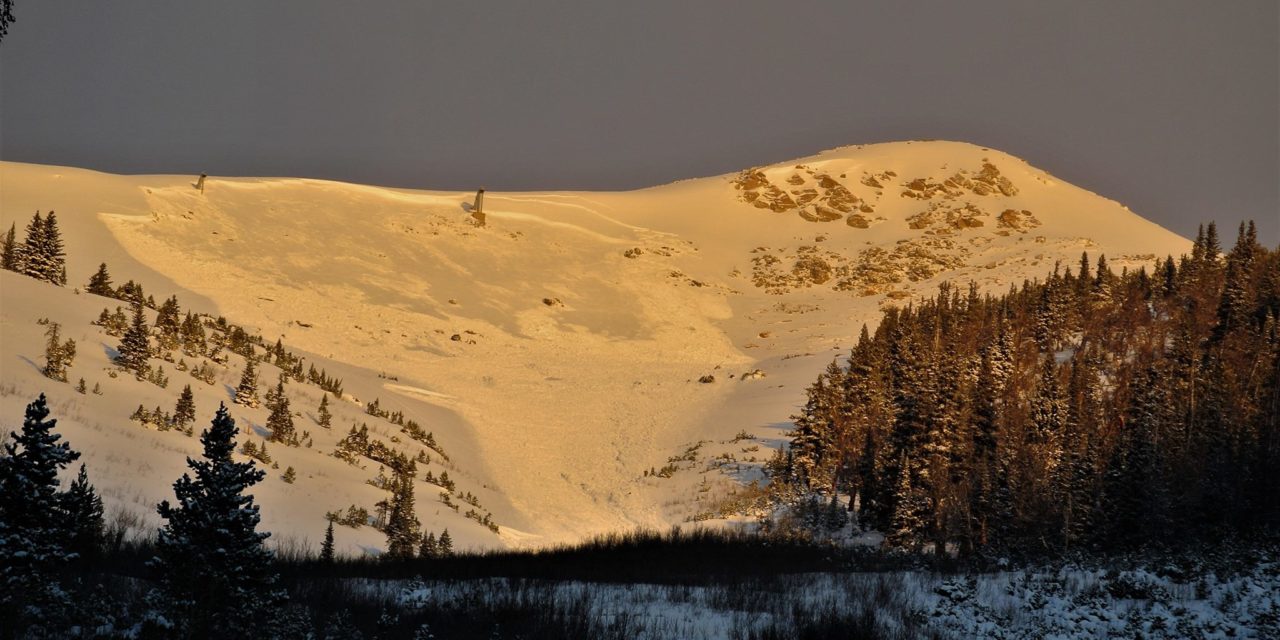 A great start to the winter season is early snow and tons of it. The early snow sets the stage for large or very large avalanche hazards throughout the back country for the entire season.

Most of us pay little attention to avalanches unless someone gets injured or killed in one. Be smart. Whether you go snowboarding, skiing, snowshoeing or climbing, learn all you can about avalanches so that you don’t end up on the wrong side of a slide.

The sad fact is that most people caught in an avalanche trigger the slide themselves by traveling on or beneath unstable snow slopes. Typical avalanche victims are usually very skilled in their sport, but have little knowledge or skills for dealing with avalanches. We are presenting a multi-part series of articles to provide some basic information you should know before you go.

An avalanche can go as fast as 120 miles per hour, a force that can easily sweep you into trees and rocks, pull you over cliffs and tangle you in your ski or snowboard equipment. Nearly one–third of avalanche deaths are the result of trauma.

If you survive the trauma, you then have to deal with a mass of concrete–like snow encasing your body. What may start as powder snow heats up from the friction of sliding downhill, melts slightly and then refreezes solidly around you. The weight of this crud is often enough to force the air out of your lungs.

If you have been able to form a breathing space before the snow settles, you may have a decent chance of survival. That assumes all members of your party are wearing avalanche transceivers and know how to use them. From here, it’s a race against time. Most people can’t survive under snow much more than 30 minutes, so becoming proficient with an avalanche transceiver, probe and shovel is a must for winter backcountry travel. About 70% of avalanche fatalities are due to suffocation.

The best defense, however, is to know how to read snow conditions and terrain and to avoid dangerous situations altogether.  Jamie Wolter, Back Country Guide and Avalanche Training Instructor says, “Early season avalanches are particularly dangerous because the snow depth is low. You are far more likely to be killed or injured by trauma while getting dragged over rocks, stumps downed trees or other terrain features when we have a shallow snowpack.”

Loose–snow avalanches occur where there is little or no cohesion in the snowpack. They usually start at a point on or near the surface and gather more snow and momentum as they progress down the slope, often forming a triangular–shaped path. Snow clumps falling onto the slope from a cliff above can set off these slides, as can melting within the snowpack.

Even more dangerous are slab avalanches, in which a layer of snow breaks away from the layer beneath it and slides downhill. Most backcountry travelers are caught in these avalanches.

Slab avalanches are the result of many snowstorms or strong winds depositing layers of snow that change over time. Some layers settle and become stronger, while others grow weaker. Weak layers are frequently grainy or fluffy so that other layers can’t bond to them.

An avalanche results when the top layer of snow, known as a slab, is not bonded well to the underlying layer and is disturbed by some kind of trigger, often a skier or climber. Rather than starting at a point on the surface, as loose–snow avalanches do, slab avalanches start out bigger and deeper, usually at a fracture line running across the top of the slide.

Slope angle: Pay attention to slope angles when you’re skiing or climbing, since avalanches occur most frequently on slopes between 30 and 45 degrees. A clinometer on a compass or one specifically made for snowpack study can be a useful tool when traveling in the backcountry.

Terrain hazards: Snowpack is likely to be unstable on convex slopes, cliff bands, boulders or trees where the snowpack breaks, wind–loaded lee slopes or beneath cornices. It’s best to avoid bowls, cirques and depressions where snow could settle after a slide. Steep, narrow couloirs (or gullies) tend to collect snow and present a trap to hikers or skiers caught in them, often without side escape routes if their sides are steep.

Precipitation: Snow is least stable during or immediately after a snowfall or rainstorm. Large amounts of snow falling in a short time are a likely sign that the snowpack could slide. A heavy snowfall of especially wet or dense snow over lighter powder snow can set up layers of instability. Rain tends to percolate down through the snowpack and warm the deeper snow. It also provides lubrication between layers, making them more likely to slide.

Wind: Wind is another indicator of snow instability. Often, high winds pick up surface snow on one slope and deposit it on the other side of the ridge (a so–called ’wind slab’) where it is prone to slides. Pay attention to the intensity and direction of the wind throughout the day. Wind loading can deposit new snow faster and more significantly than snow falling out the sky by a factor of 10 or more under the right conditions.

Temperature: Temperature fluctuations cause a number of problems with snowpack stability. Temperature differences between the ground and new layers of snow, between different layers of snow, or even between the air and the top layer of snow, can cause changes in snow crystal formation. A common crystal type that is particularly dangerous due to its inability to bond with other snow crystals is know as ’hoar.’ Hoar snow, also called ’sugar snow’ because of its similarity to granulated sugar, can be found at any depth or at multiple depths in a deep snowpack. Another common temperature problem, especially in the spring, is rapid warming of a slope, which can lead to wet–snow avalanches.

Snowstorms pile up one after the other all winter long. Wind blows snow off of some slopes and on to others. Temperature changes cause snow crystals to metamorphose. If the snow’s consistency remains constant, the snowpack is homogenous and stable. It’s when the snowpack develops different layers of different snow types that it becomes unstable and hazardous. It is extremely important for the backcountry traveler (especially on slopes between 30 and 45 degrees) to take the time to analyze the layers of the snowpack and test their stability.

While terrain, weather and snowpack play a huge role in contributing to the likelihood of an avalanche, it is also important to recognize that ego, emotions and group–think can cloud your judgment and impair your decision–making ability. In fact, according to a recent survey of Canadian avalanche professionals, respondents identified ’human factors’ and ’choice of terrain’ as the leading causes of avalanche accidents.

Jamie Wolter said the human factor is always aprt of the equation, “I like skiing in groups of 2 – 3 experienced backcountry skiers. I want to know and trust my partners. I need to trust my partners with my life.”
Some common decision–making mistakes:

Always know before you go is a rule of thumb for back country enthusiasts. Check the latest forecasts for you trip and local predictions to help make the best choices for terrain and exsisting conditions. If you are new to the backcountry Wolter says, “Find a mentor, someone with more experience willing to take you out and impart their knowledge.”  and definitely “Take a class and realize that this is the beginning of your avalanche education.”

Zone-specific backcountry avalanche forecasts have begun for the 2018-19 season and zone forecasts are published every day by 8 AM through the spring. Visit the Avalanche Information Center for the lastest update. https://avalanche.state.co.us/

The primary avalanche concern is that a backcountry rider can trigger a large avalanche that breaks on weak, collapsible snow layers near the ground. This problem is specific to northerly and east-facing terrain where a harder wind-drifted slabs sits on top of worrisome weak layers. The only way to avoid this issue is to avoid the above-mentioned slopes. Sheltered areas and southerly-facing slopes are relatively safe from these Persistent Slab avalanches.

In the past couple weeks riders have triggered numerous large and dangerous avalanches. A large number of these avalanches were in the Northern Mountains. Although this is where the majority of avalanche activity has been, large avalanches were reported from all over the state including the San Juan mountains. The avalanche danger is greatest in the Northern Mountains, especially the Front Range, as northern and eastern areas received the most recent snow. As you move south through the state, the avalanche danger tapers, but as recent avalanche activity shows, large avalanches can be triggered on wind-loaded slopes in any mountain range in Colorado.

If you are traveling on south-facing slopes be aware that the northerly wind of the last few days drifted snow into slabs on these sunny slopes. It will possible to trigger small avalanches in this wind-drifted snow. Wind Slab avalanches can be avoided by steering clear of areas of snow near ridgetop or on the walls of gully-features that feel hard and have a smooth looking appearance. Hollow sounding snow underfoot or machine is also a sign that you may be traveling on one of these slabs.

The clear and cold weather is changing our snowpack and increasing the snowpack stability by weakening surface slabs. This is good for short-term stability but not a good weather pattern for our snowpack in the longer term. Under this weather regime weak layers will continue to flourish, both near the ground and near the surface, and our next major snow storm will once again lead to widespread avalanche activity.

REI and CAIC contributed to this article