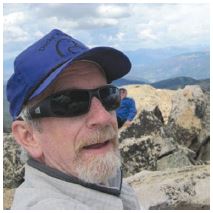 It’s funny how our brains have a way of a way of marking important, sometimes extended, events with vignettes that serve as way points to help us navigate memories later. And so it was that my hunting partner and I were slowly walking back to the truck on the last day of second rifle season last year when I encountered something that, for me, summed up a salient aspect of the 10-day experience.

There we were walking through a small patch of sagebrush at about 8,500 feet. The day was warm already, just before noon, and the sun beat down with scarcely a cloud to interrupt the constant azure sky. A bright yellow object lying on the dry, dark brown earth caught my attention.
I walked over to it and looked down. No way, I thought, but there it was, undeniable as sunrise: a flowering dandelion poking up
through the parched earth. On Oct. 29. At 8,500 in the Colorado high country.

Never mind that we should have been walking through snow, which, as fate would have it, was not destined to fall on that spot again for another seven weeks. A freaking dandelion! More than 30 miles from the nearest town, manicured lawn or sprinkler. WTF?

As I am wont to do, I took this apparition as a sign, as emblematic of things that had begun to haunt meon that trip. It was dry. No, it was DRY. An inch of snow – long gone – had fallen two weeks prior, the only precipitation since an anemic monsoon season deposited scant rain in early August. A late, wet winter earlier in the year carried considerable vegetationfar into summer. But by fall, conditions were apocalyptic.
What normally passes for dust had been pulverized into a talcum-like powder that dispersed in the air as if weaponized. Passing pickups would send billowing clouds hundreds of feet, and then it hung there like a suffocating beige fog for hours before settling.

Mind you, this is in a place where by the time you turn onto the 25-mile road into it, you are already 10 miles from a town that most people would consider the middle of nowhere. What had become of this once-wild place I have for decades considered a refuge from the incessant hum of our inexorably encroaching civilization? The dandelion. The dust. Wall to- wall cellphone signals. People and cows at every
turn. A changing climate. I was clearly no longer far enough away. But if not here, where?

Therein lies the rub. What I lament happening in this once-far corner of Colorado is nothing compared with the looming stampede poised to run roughshod over other places many of us hold near and dear that are far closer to the teeming hoards. Certainly Grand County is among them, and signs of the impending onslaught are rife.
Don’t get me wrong. Much good comes with the parts of the lamentable: jobs, security, safety improvements, offspring being able to make a living where they grew up.

But don’t pretend the costs don’t exist. Nor am I one to see global climate change in one warm, dry year. Yet indicators of a far more insidious creeping change are all around us. Prickly pear cacti growing 1,000 feet higher than they used to. Lakes freezing over later and thawing earlier than ever, year after year after year. Bleaching of coral reefs around the globe. A 500-mile vortex of plastic spinning in the middle of the Pacific Ocean. A hurricane– in Ireland. Vegetation zones creeping ever upward in elevation. Rising sea levels. Shrinking glaciers. Calving ice shelves. Drier rivers. But don’t look at river flow for one year. Look at cumulative effects, the level of Lake Powell, for instance, which currently is about 80 feet below full. People are seriously talking about draining it into Lake Mead, which is at a level not seen since it was being filled.

If Lake Mead drops another 25 feet, one of its distribution “straws” will be sucking air. Another 50 feet, and both straws will be high and dry.
The last time it was full? 1983. And don’t even try to figure out where the millions of people who are supposed to move to the Front Range over the next couple of decades are going to get their water. Then there’s that damn dandelion. It didn’t belong there,
and many experiences in the West are not what they once were. Yet, like the people in Ray Bradbury’s “Dandelion Wine”, we still find beauty and awe all around us – as long as we are willing to perceive them. Meanwhile, we stay mindful about our lives, tread lightly do what we can to ensure the best outcomes, all the while looking for balance between the lamentable
and the laudable.