I am writing to bring to attention a requested amendment to the Rural Growth Area ( RGA) of the Grand County Master Plan by the developers of Byers Peak Ranch West ( Gold Medal Ranch) between county roads 72 and 73.

The developers purchased the land around the St. Louis Creek aware of the parameters of the master plan but now are hoping to be granted the amendment to increase the size of their project. The county planning commission accepts amendment proposals in September and March.

Gold Medal Ranch is happening:. The roads are in, the lots have been sold but the amendment does not have to. The current development is to the south/ the floodplain of St. Louis creek (what I can tell from the road). Amendment allowed, it would take the development further west/south, where the stream corridor becomes narrower and the flora becomes denser. Included in the development are 3 trout ponds, 5 miles of private trails, river access and a SHOOTING RANGE! On the edge of the National forest!

I am opposed to the amendment being granted for these reasons : Why do we have a master plan if we allow amendments? The area is an important wildlife habitat; contains wetlands necessary for said habitat, and the St. Louis creek is a critical tributary of the Fraser, named by American Rivers as the 3rd most endangered river in the US. The St. Louis creek is already stressed, nearly drained, by the usage of Clark Lipscomb. How will there be any fishing if there isn’t any water? It is among the most pristine view corridors in Grand county, and building further away from ‘urban’ areas, encroaching on forests and habitats should become a thing of the past.

Climate change is here. The St Louis creek showed temperature exceedences this summer; fires like the Williams Fork will become more common ( witness CA). What worked 10 years ago no longer does; our future depends on what we choose to do today. Developers are not in charge, our elected and volunteer officials are, and are our representatives.. Let’s protect what sets “Grand” county apart from other mountain communities. The planning commission will host another meeting, with the September date TBD. www.co.grand.co.us.

Trump is the most anti-environmental president in U.S. history.  He filled his administration and federal agencies with enemies of the environment.  Congressional republicans are equally bad.  Trump has weakened or gutted landmark environmental laws including the Clean Air, Clean Water, Endangered Species, Migratory Bird and Environmental Protection Acts.  He reduced the size of National Monuments to promote resource extraction.  He has tried to push through environmentally destructive projects such as pipelines and his border wall.  He has reduced or eliminated over 100 environmental protection regulations, mostly to benefit corporate and industrial operations and profits. Or his actions are to benefit his sons, who are trophy hunters, such as proposing to allow hunting in federal wildlife refuges.  Fortunately most of these actions are being challenged in the courts.  The environment always loses under a republican administration.  I know because I spent my career in federal natural resource management.  Vote democratic down the ballot because Earth’s survival depends on it. 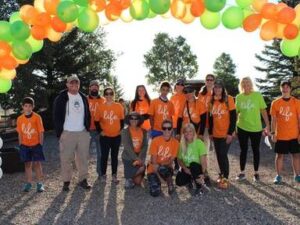 We wanted to provide you with some information regarding the turnout and results for our 2020 Walk for Life event in Kremmling at the Middle Park Fairgrounds on September 5.

There were 126 of us wearing orange shirts walking around Kremmling proclaiming LIFE!  That was 41 more participants than in 2019. An inspirational increase for our second year, especially in light of COVID-19 regulations.

We raised $10,350 from business, individual and church sponsorships.  The total goal for the Walk for Life was $20,000, but because of your belief in PRC and LIFE you helped us raise $26,546!  This could not have been possible without your dedication to fundraising for PRC.  Our hearts are truly humbled by the outpouring of support.

PRC has been serving Grand County for 38 years because of the generous support from people like you.  Our mission is to support and educate all those who are affected by an unexpected pregnancy and related concerns.  Our ministry encompasses support for women, men, mothers, fathers and children.  PRC aims to communicate to all persons involved that they are loved, accepted and valued.  We are committed to communicating accurate, complete, and current information regarding parenting, adoption, abortion and issues related to these decisions.  We are not here just for families in crisis, we are here also for any family that needs education, resources and support.

Sagebrush BBQ & Grill was honored to host the Mountain Family Centers’ Taking Steps for Cancer Golf Tournament on September 12th at the Grand Lake Golf Course.  The Sagebrush Western Classic was a fantastic event. We want to give a special thanks to Vicki Winterscheidt.  Vicky played an essential role in organizing the fundraiser.  She crossed all the T’s and dotted all the I’s.  Without her, we would not have had such a great tournament.  Vicky went above and beyond, and we cannot thank her enough.

The Committee leaders for Taking Steps for Cancer, Sam and Judy Eberly, have provided an enormous asset to Grand County.  They have an outstanding committee and provided over 50 volunteers to help this tournament.  They all deserve a huge pat on the back.  These folks are an impressive and ambitious group of the very best savvy Grand Lake community members.  This organization supports all of Grand County’s cancer patients.  Please give a HUGE thank you to all those who helped and a pat on Vicky’s back for making it happen.

What next? A few weeks ago I put up several political signs in my front yard – good location low down in the Highlands. Exercising my right to Freedom of Speech. All fine for less than a week when my Trump sign was stolen. No other signs were stolen. No doubt somebody with Trump Derangement Syndrome. Whoever did this is certainly sick. The signs were clearly on my property so he/she had to trespass to take it. This isn’t just theft and trespassing, it is a violation of my Constitutional First Amendment Right. For this person and those who think that it’s just a little prank, I have news for you – it is also a Federal Crime. There is ample good reason for this Constitutional right and federal law that protects both political party signs.

Well I replaced the little Trump sign with a bigger one. A 2′ by 4′ sheet of plywood painted black on white with “TRUMP – D-ass Stole My 1st Sign”. Now some might think that the “D” stands for Democrat but it could stand for Dumb, Deranged, Developmentally Disabled, Diaper, Deplorable or all of the above! That sign was nailed to a landscape tie with 5 – 3 1/2 inch nails. A couple of weeks later, you guessed it, the Deranged, Diaper Ass struck again.

This prompted me to install a night vision camera and to make another, even bigger, TRUMP sign with appropriate comment. So what next? Your move D-Ass.

A Letter from the Mayor of Winter Park