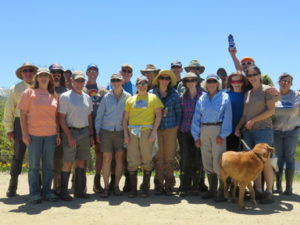 Over 3 days this spring 70 volunteers from both sides of the Divide, helped harvest and plant more than 2,000  willow stakes on a one mile section of Ranch Creek. This project site was chosen for vegetation work because past ranching practices had destroyed all willow growth and other wetlands plants. The current landowner has fenced his cattle from the stream to allow the riparian zone to re-establish. Learning By Doing partnered with the Headwaters Chapter of Trout Unlimited and received a Patagonia Enviro grant to give the recovery of healthy wetlands plants in this stream reach a jump start.

Ranch Creek flattens out and flows slowly through this mile-long project section. Without shade from willows, this slow moving section of stream is heating up to temperatures that put it on the State’s 303(d) impaired river’s list for temperature. In the hotter summer months,temperatures that reach lethal levels for trout are flowing from Ranch Creek into the Fraser River just above the public fishing reach in the Fraser Canyon. If all goes as planned, the willows will become established and help alleviate this problem.

Without willows setting deep roots, the soils on each outside bend are eroding rapidly and sending sediment downstream that damage bug habitat and spawning grounds. The project focused on planting deep rooting willows on all outside bends to help stabilize the stream banks.

When the willows grow tall enough to help shade the stream, they will also help provide a canopy for other wetlands plants which will create a healthy riparian zone. The riparian zone is the filter for the river and can help alleviate higher ammonia levels coming from nearby cattle pastures.

Thanks to everyone that worked on this project. You are healing Ranch Creek, the Fraser River and the environment that depends on our rivers and streams in Grand County.

The “options” that I have sought since my case was tainted and has been closed by District Attorney Brett Barkey are these four:

* A commitment on the part of the Law Enforcement Agencies and the County District Attorney Office to develop and prosecute cases of abuse to at-risk elders and at-risk adults.

*  The County Commissioners to develop an oversight committee of citizens in Grand County who will take a roll in guiding and reporting on where law enforcement in the County has prioritized spending time and money.  A committee modeled after Denver’s Citizen Oversight Board.

*  The County fund training of our law enforcement departments and the District Attorney’s Office on the subject of identifying abuse, collecting evidence correctly, and prosecuting cases of abuse to at-risk individuals.

* Repeal the Judicial District 14 policy of blocking victims from the right to hear digital recordings of the cases in court in which they are involved.  Do not require victims to pay a transcriber for the work of transcribing what can easily be heard on recordings. This policy is just a smoke screen to the actual words spoken, and the emotions spoken.  The policy allows changes from the original spoken word and causes victims to succumb to additional financial burdens.

Myself, and the advocates working on my behalf, have found that the power center for justice is too heavily born on the shoulders of the Sheriff.  He alone is deciding which cases matter enough to spend his budget of money and manpower on. He is unable to work all the crimes that occur in our County.  The Citizens have seen this last year’s crime rate rise dramatically. In the fall when the burglaries happened in the 42 houses his office sent out no notice to the County, over his Facebook page, to tell us about the break-ins.  Nobody knew to start working on watching their neighbors’ empty homes. Nobody spearheaded any effort to form neighborhood watch programs. Now we have no understanding about what is happening in the cases.

In my case I incurred a financial loss of around $15,000.00 dollars in back rent.  I rented a home to a man that told me that he was a contractor before moving up to Grand County.  When he did an installation of a wood burning stove in my rental property he didn’t get a building permit and he used an exhaust pipe that was single walled.  The wall that was penetrated by the pipe was burned. Rent was covered in a written contract for labor toward improvement on my home of 40 hours per month in lieu of dollars for 12 months.  Much of the 27 months that the renter lived in the home there was only a verbal agreement. During the time he lived in the home he owed 1,080 hours of labor to me (half a year of work full time.) The work he did, (often poorly completed or partially done) is estimated at 330 hours or 42 regular business days work. When I told him that he had to leave, I suffered a battering with the door of the home, in the hands of the renter, (he told the Deputy that the door hit my foot and leg by accident but later admitted to putting his weight against the door after it closed on my leg) and I had to go through two months of physical therapy after being assaulted.  He sold or gave away an armoire of mine while he was renting from me (against my directions.) He told me that I had to remodel a bathroom that had been remodeled 5 years earlier because there was black mold coming out of the jets on a jetted two person tub. He sold my pedestal sink and toilet. He admitted to law enforcement that he took items from the home when he vacated as well as the armoire disposal. He left my home damaged severely, causing me to have to pay about $5,000.00 to repair and clean.

I took a copy of Laws that were put in place by the Colorado Legislature, Colorado Revised Statutes 18-6.5-101 through 108, to Undersheriff Wayne Schaeffer, at the Sheriff’s Office, in September of 2017.  I spoke to Sheriff Schroetlin about how no report was written . He decided not to instruct his investigators to pursue documentation and evidence of the crime of abuse to an at-risk elder. The District Attorney’s office was not brought the appropriate evidence in the case.  The D.A., Brett Barkey, was told about the case by County Commissioner, Kris Manguso. Barkey e-mailed Manguso that he would have his investigator, Doug Winters, go over the evidence (being brought in the case) with me before the case was closed, later Winters refused to meet with me.   The Investigation done by Leo Piechocki stated that his own opinion was that I was not injured in the assault when two different doctors had put on forms under DIAGNOSIS: Sprains, strains, and soft tissue damage.

Is Grand County going to keep justice from the people who can’t afford an attorney?  Is law enforcement only going to happen for those rich enough to afford protection under the law? It seem like, “With liberty and justice for all” just doesn’t apply here, even when laws are written in our own State to met out greater punishments to those who abuse the elderly and the at-risk.

In several other Counties in Colorado prosecuting these kinds of cases is routine.

Form the Grand County Oversight Committee.  Start the discourse between the citizens, governing bodies, and the law enforcement community.

At the anniversary of the attack on Granby by Marv Heemeyer, let’s create an atmosphere of trust and real justice in our County and not let frustrations with the system get over the top.

A Letter from the Mayor of Winter Park