KILLDOZER: The True Story of the Colorado Bulldozer Rampage 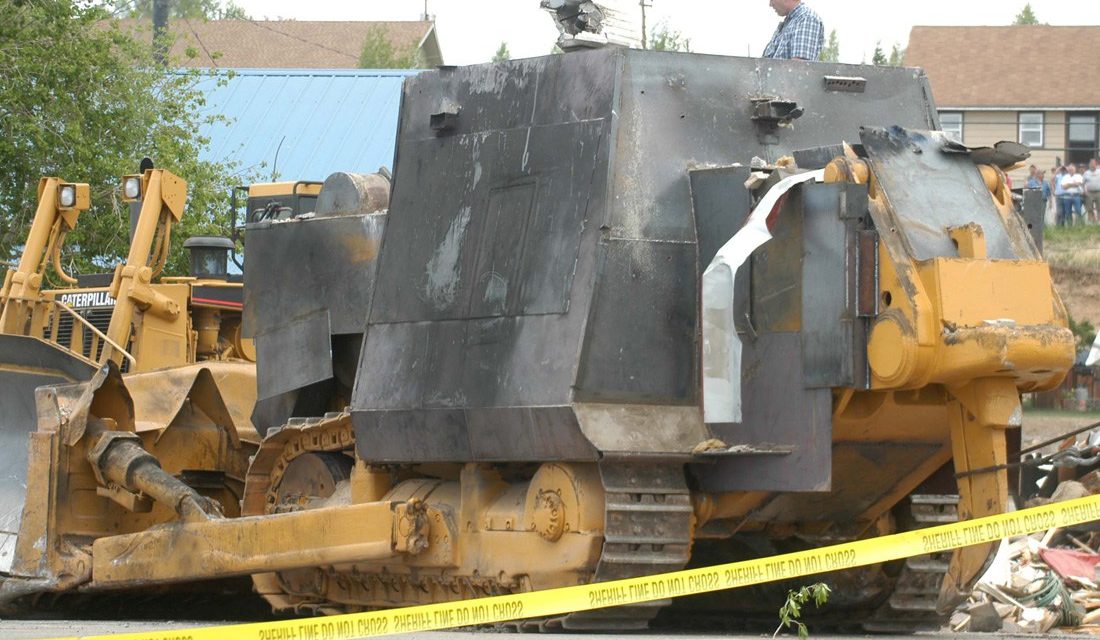 It was a overcast day in June 2004, after months of preparation, the garage doors of a small shop in Granby came crashing down as a armored behemoth came to life hellbent on death and destruction.

The machine was a Komatsu D355A Bulldozer, outfitted with an armour steel cap to fortify a madman from enemy attack. The tank-like vehicle was piloted by anger and revenge.  Fabricated to fulfill a destiny and exact a price for years of pent up animosity for a perceived judgement on the behalf of the establishment.

The assailant was on a mission from God. He installed front and rear cameras to feed images to monitors in the cab, and several gun ports were set around the control center. The “Killdozer” was weaponized with a 308 rifle pointing out the front port, a Semi automatic mini Ruger 14 pointed out of the right side, and, a $7,000 50 caliber Barrett sniper rifle from a port near the rear of the cab.

A stockpile of food and water was stored inside, as well as an air tank to help provide air circulation.

Throughout the one-and-a-half years of construction, the assailant documented his progress though notes and audio tapes. On one occasion he wrote, “I was always willing to be reasonable until I had to be unreasonable. Sometimes reasonable men must do unreasonable things”.

Marvin Heemeyer of Granby, Colorado was a profoundly frustrated muffler repair man, a disgruntled human being that felt like he had been wronged by local officials and townsfolk. It is reported that in his writings and audio tapes God wanted him to cleanup the town.

Many people liked Mr. Heemeyer, “he was very likeable individual” according to friends and customers, but unfortunately, he let a perceived injustice take control of rational thinking and fuel the fire of death and destruction.

Patrick Brower, editor of the local newspaper at the time, and a person named in Heemeyer’s ‘Hit List’ said, “It was creepy and overwhelming to think that a person had devoted that much time and energy to building a machine of revenge.  What a waste of creative and mechanical ability”.

Brower added, “I came to realize that Heemeyer had decided he was going to attack the town and its ‘establishment’ because he felt he had been wronged by a corrupt government and a back-stabbing local populace. But in reality, the town had bent over backwards to be fair to Heemeyer, he just didn’t get his way in town deliberations. I know this because I personally covered the three years of town meetings over Heemeyer’s grievances. I also knew Heemeyer and interviewed him many times. I also helped him edit many ‘letters to the editor’ throughout the proceedings”.

Brower has written a book about the events leading up to and the details of that day in June 2004.  He pontificates the aftermath of public controversy lending to the false narratives we see posted in social circles today.  A narrative that pushes Marv Heemeyer forward as the last great American folk hero, when, in fact, his misfortune turned grudge, turned psychopathic rampage was far from heroic. It is lucky no one was seriously injured or killed that ungovernable day in June 2004.

Truth is under attack…

These thoughts bring to light the fear felt around the world as professional journalists become targets for hate and rage extrapolating a price on truth. Or worse, enemies of the state sought out and killed for writing, speaking or publishing truth.

Anyone who has tried and failed to influence an uncaring government cannot help but feel a twinge of admiration for the extreme measures taken by Marvin Heemeyer, but our country was built on democracy and most believe we should accept and compromise throughout the decision-making process.

Brower wrote in a recent Denver Post column, ”I can only hope that this anti-media and anti-governmental trend in our country fades away as a mere fad reflective of our overly partisan times guided by false narratives and outlandish conspiracy theories”.

Newspapers and other media outlets are attacked because they generally do a good job of communicating the truth. “And sadly, the truth itself, these days, is under attack.”

The line between legitimate vigilante and crazy-muffler-man-with-notions-of-divine-intervention has become a blurry reality for many as the truth memics echo chambers of social torches instead of facts of one man’s crazy hate and rage against the establishment.

Patrick Brower, the author of the new book “KILLDOZER: The True Story of the Colorado Bulldozer Rampage,” will speak and sign books about this bizarre event in Colorado history from 6-8 p.m. Tuesday, July 24 at Idlewild Spirits in Winter Park.

Brower, will bring a piece of the Killdozer and give a presentation about the rampage that destroyed 13 buildings in the small mountain town of Granby, Colo., only 21 miles from Winter Park.

Brower’s book, which has been selling well regionally, has gained renewed prominence in the wake of the murders of five journalists at the Capital Gazette in Annapolis, Md. last month.

Brower’s book casts light on the bizarre Granby event, the rash of violent rampages in America and this country’s fact-challenged landscape.

The book takes readers through the rampage’s origins, the shocking event itself and the peculiar way in which the perpetrator of the rampage has become something like an American folk hero.