Fridays have not been the same 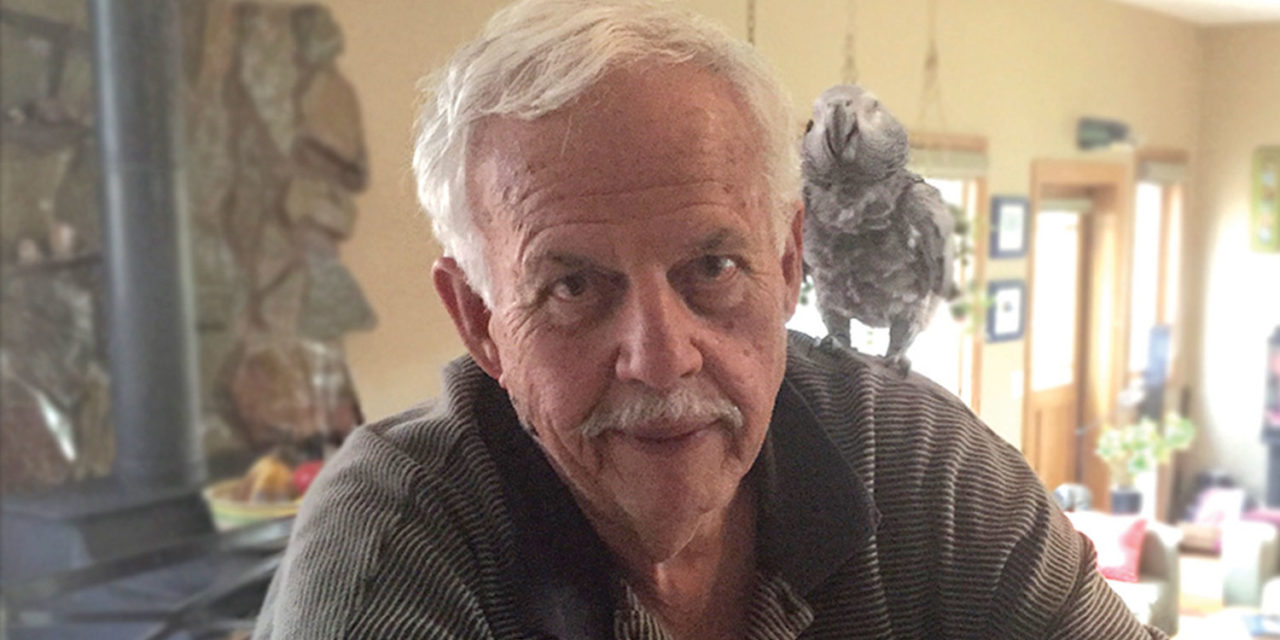 Last year, Grand County lost an old soul, a friend to many and a mind that revealed pearls of  wisdom week in and week out. Even with some of his final breaths on earth Jon deVos wanted to share his thoughts. On his deathbed as he popped in and out of consciousness he ask for his laptop so he could get out one last provocation.

I was glad to have shared time on this planet with Jon.  We became friends in the late 80’s early 90’s in a professional setting and when I started the paper last summer he called me and said, “what the hell are you thinking?”  After a couple of cups of coffee and an exchange of idyllic words of wisdom, a short lived but deeper understanding of life emerged in our relationship. That time was, and always will be, cherished!

Jon deVos was an award winning columnist and prolific philosopher with a knack for extracting wit from everyday life and putting it on paper. You can revisit a collection of Jon deVos work by searching the archives of Winter Park Times or the Skyhi News websites.

One year after his death I thought it would be fitting to bring back a few snippets of Friday’s last couple of reports we published in the Winter Park Times.

Young people are always asking what it was like in the “olden days” of Grand County around Hideaway Park. They stare at me expectantly as they might a tipped vessel spewing wisdom. I stand there hesitant, because it was so peculiar living here that one’s words must be chosen carefully, admittedly less so now that the statute of limitations has passed.

Let me momentarily digress for newbies: Hideaway Park was the name of this happy hamlet until 1978 when goofy met greedy and they changed the name to Winter Park hoping to hoodwink hapless tourists away from the ski area and into town where they would theoretically spend lavishly on T-shirts and view lots.

I explain that back in the early ‘70’s, it was cold, there weren’t a lot of jobs, and folks wore knitted hats saying “Ski Elsewhere” and “Ski Barstool”. It wasn’t a tourist town or a real estate bonanza, just a happy little self-contained colony of self-contented forest-dwellers next to a Denver city park.

My pyrotechnic interests had two early influences that blended into one memorable experience. The first influence was my father’s war with our neighbor and the second was our proximity to Nogales. We’d just moved to south Tucson into a tract home so new we had to wait for the concrete sidewalk to dry.

The neighbor’s name was Choate but I think political differences were at the heart of why my dad called him “Pig” Choate, a play on the homophone with shoat, the term for a young pig. Our houses faced each other across Menor Stravenue. Streets called stravenues are found nowhere in nature but Tucson, Arizona. It is a diagonal street that intersects a street and an avenue – a stravenue, with a unique postal abbreviation of “Stra”.

Now, I stared over at the Choate house a lot because along with his wife, Pig lived there with 3 daughters, one of whom was Mandy, my deepest and most abiding love before I got my driver’s license. I’d sit in our front yard for hours waiting for the opportunity for a glimpse of my maiden of Menor. I think I was once rewarded with a tiny wave and a shy smile but in hindsight, I think she might have been creeped out by the binoculars…..

The Heeney Tick Festival began sometime in the 1960’s as a fundraiser for the Lower Blue Volunteer Fire Department. It commemorated a Heeney settler’s recovery from Rocky Mountain spotted fever back in the 1940s. That’s when the Green Mountain Reservoir was being built as part of the Big Thompson Plan. Recollections are hazy as to exactly when the festival began, but by 2001 the crowds were so thick that things were getting a bit chaotic.

Others claim the first Heeney festival was held in either 1980 or 1981. It seemed to depend upon the age, memory and beer content of the local you’re talking to. The population of Heeney then was about 50, but that included 14 dogs for tax purposes. By 2001, the population had swollen to 58 after a big litter of pups, but the crowds at the festival had to be bussed in from remote parking.

The confusion about the number may be linked to the fact that there were two places to buy commemorative t-shirts, five places to buy hand-made crafts, and 18 places to buy beer.  There was even a young entrepreneur walking around with an insulated beer keg on his back selling refills for whatever you tossed in his cup. I’ll never forget my first Cheesy Beany Heeney Weeny, but then, who could?

Marxism is out of favor and folks don’t like to talk about class distinctions in America but what is happening, under the smoke and mirrors of the new budget and making health care better, is that these bills are a clumsily disguised taking of $700 billion dollars from those who need it most and giving it to those who need it least.

How do we convince our leaders that insurance is not the answer? America is the only nation to make profit centers out of cancer and old age. That’s because we don’t pay for health care. We pay for health insurance.

Single-payer health care for all is the answer. It wouldn’t be like coal, there’d still be lots of jobs in healthcare administration; all it would do would be to strip the profits to be made by denying coverage and the obscene nine-figure salaries paid to executives that contribute absolutely nothing to your health….

Like many of us in Grand County, living on the edge of the wilderness, my wife and I live under the threat of becoming a snack for some marauding bear while we’re basting chicken wings on the barbecue or pulling weeds from the garden. Every day you read about some poor indigenous hillbilly getting mauled by a moose, badgered by a bear or chomped by a cougar.

So the other night, just as I stepped out the door, a huge black shape charged at me out of the darkness of the garage. I was terrified. Don’t you think my wife would excuse me for squealing like a schoolgirl? Apparently that thought never crossed her mind.

When it comes to our two rescue mutts, Freeta Goodhome, who is one stenchful basset hound, and Surely who snores like a buzz saw, we love them but we’re also realists. We gave up long ago thinking they would ever bring our slippers or fetch the newspaper without chewing it to smithereens. On the plus side, they wag when we walk into the room….

These are just snippets of Jon deVos columns for the Winter Park Times last summer.  Search our archives for complete columns and more of his works.

We all miss you Jon … and we will connect again sooner than we care to admit.  😉