What It Means to Endure

McCoy Tyner died this week. What a loss. It’s almost as if Byers Peak suddenly crumbled to the ground and disappeared from our horizon. 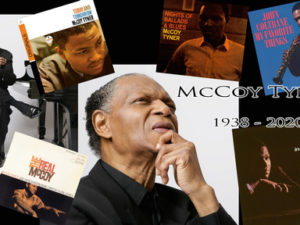 If you missed his obituary in the New York Times, Tyner, 81, made some of the finest recordings in jazz history. He could make a piano sound — feel, actually — like ocean waves lapping the shore with a rhythm and melody all his own.

Byers Peak continues to make our world heavenly. So Tyner’s music, thank goodness, will outlast us.

Endurance is a funny thing. We tend to admire others who don’t give up their dreams, who demonstrate grit and resilience regardless of whatever fate has in mind.

Like a boxer knocked down for the third time who muscles himself up off the mat, only to risk another knockdown, there are folks in dire straits who, once healthy, are patients with life-threatening diseases. They fight just to see another day.

An uplifting news story recently reported that a trail runner in Washington slipped on an icy patch, fracturing his leg, then managed to crawl for over 10 hours before a search-and-rescue team reached him.

The prospect of doing anything for 10 hours seems daunting to average people.

This young trail runner, facing his own demise, never quit. He probably did what anybody else in good shape would do. Bloodied his knees for l0 hours without losing his wits, and then got to  share his happy ending with reporters from a hospital bed.

God knows the daily news is rich with tragedy. Hikers lose themselves in the wilderness all of the time. Some die. What separates a victim from a survivor involves experience, equipment and luck. Call it fate.

Love ‘em or hate ‘em, our politicians campaign against overwhelming odds, only to endure exhausting slogs to the finish. For the majority, their dreams collapse in despair.

For two years now, a noisy herd of democrats has spent obscene sums in hopes of winning the presidential nomination. Sure they knew the odds were stacked against them, that only one will survive until November.  Yet they run anyway and, like following laws of nature, finally concede defeat.

Darwin’s idea about survival of the fittest was not just an idea.

Take the Chicago Cubs. They endured defeat for 108 years without a World Series championship. Their Major League record ended happily in 2016. Those of us who root for the Cubbies did so not simply as baseball fans. We’re a cross section of humanity that treasures those with that special never-give-up gene.

Which brings us back to McCoy Tyner. The 5-time Grammy Award winner was much more than a pianist who made it big. Music was his life from the day, at age 13, when his mother encouraged him to play piano until he passed away on March 6. He exemplified what it is to be a true artist, to be a Cezanne or a Maya Angelou who grab us in deeply intimate ways.

Tyner once told a reporter, “To me, living and music are all the same thing. And I keep finding out more about music as I learn more about myself, my environment, about all kinds of different things in life.”

He made those discoveries in such a natural fashion with John Coltrane’s quartet back in the 1960s. His piano introduces the group’s rendition of “My Favorite Things” and drives its momentum so beautifully that no words can do it justice. He continued to produce dozens of albums with the likes of Freddie Hubbard, Art Blakey and Wayne Shorter over the course of his lifetime.

Long ago, we saw him play at the renowned Village Vanguard in New York. Pure magic. That memory endures.