Update from the Center of the Universe

It’s time for the annual update from “down there,” The Center of the Universe (TCOTU). For the purposes of this article TCOTU is located precisely at the confluence of the Green and Colorado rivers in Canyonlands National Park in southeastern Utah.

For context, at least some of the water flowing by in the Fraser River joins the Upper Colorado River and flows downhill through Gore Canyon, past Dotsero, and then Glenwood Springs. From there that water meanders to Grand Junction and Moab before joining the Green River and dumping into Lake Powell 35 or so miles later.

For 17 years I have been visiting TCOTU on an annual fall raft trip. In the grand scheme of things 17 years is not as huge as a gnat’s hair on a gnat’s head. This reminder comes every time you open your eyes to the geological history revealed in Canyonlands. But for me, 17 years is a mighty long time. Memories of these voyages blend together like a delicious smoothie, but one thing is obvious: The place is constantly changing.

This year we put our boats in the water on Sept. 21 at Ruby Ranch, about 20 river miles below the town of Green River, Utah. The ranch is a sprawling oasis of green in the desert, an alfalfa farm with massive sprinklers pumping colossal gulps of Green River water onto thirsty alfalfa in the hot desert sun. They have a boat ramp and allow the public access for a small fee.

From Ruby Ranch we floated down for 143 river miles through sandstone layers representing millions of years of earth history. The 97 river miles before TCOTU feature lazy, sometimes sluggish current. The biggest boating challenge is presented by the occasional upstream breeze, sometimes elevating to gales, blowing away anything that’s not strapped down and even peeling away some stuff that is strapped down.

This year has been one of the three lowest water years on record in the Colorado River watershed. It’s been dry and hot. There are massive sandbars along the Green, some hundreds of yards long. These inviting and sometimes foreboding bars have grown over the past year thanks to those sandstone walls, less water and lots of hot, dry wind. We camped on several of these temporary islands and peninsulas knowing full well that the only thing standing between us and a real hot mess was the threat of a sideways sandy windstorm. We got lucky mostly.

And then there’s green slime, which is in all of our rivers and has increased on the Green River as well. There is a threat from zebra mussels and other predatory species. We had to fill out a form proclaiming that our boats were clean before we launched.

Floating the last 97 miles of the Green River can be magic. Warm, mild days and crystal-clear nights full of stars and satellites blend together and seat you in a bigger world where things matter, only so much more. As you reach for a cold canister of beer out of the cooler, your eye might be drawn to a cliff dwelling or other artifact that makes you wonder how people survived down here without shelter and Sam’s Club and boats and straw hats and coolers brimming with luxurious adult beverages. Miners baked in the hot sun in the same place you might be camping, hunkering down under a colorful beach umbrella chuckling at the descending chirp of a bunch of horny male canyon wrens.

On the way down you go through a very winding section named “Bowknot Bend.” John Wesley Powell gets most of the credit for exploring, mapping and surveying this stretch of river. He and his men named most of the main features during river expeditions down the Green and Colorado that he led in 1869 and 1871.

In his journal he wrote, “We sweep around another great bend to the left, making a circuit of nine miles, and come back to a point within 600 feet of the beginning of the bend. In the two circuits we describe almost the figure 8. The men call it a ‘bowknot’ of a river; so we name it Bowknot Bend.” 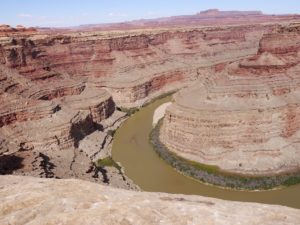 At last we reached the last mile above the Colorado confluence. It was here that the major and his men scaled the 1,300-foot sandstone face to reach a stunning view of the confluence. This is no easy hike, much of it going straight up loose sandstone marked by intermittent kerns. There are several features where a hiker has to do a bit of rock climbing if she wishes to continue. Some of these are frightening to the average hiker, but if a one-armed Civil War vet could make it, so can you, right?

Standing there at the top of the cliff, looking way, way down on what the Utes considered TCOTU, the mighty confluence, is the pith point for an expedition through Cataract Canyon. Breathtaking.

Below, 43 more river miles await, including some big pools, eddies and drops. These water features peak in a place called “Big Drop 3,” or “Satan’s Gut.” It was here, at this historic low water level that I spent 10 minutes perched sideways at a 45-degree angle struggling not to flip my 16-foot cataraft onto a patiently waiting, truck-sized rock. What happened in those 10 minutes is the stuff of legend and a tale best told over a few canisters.

Steve Skinner notes that the Colorado at TCOTU is flowing more than twice as high today as it was a week ago. Reach him at nigel@sopris.net.