The Dog Star’s Out Tonight

It’s been a pleasantly dull week in Fraser.

Now that holidays are behind us, holiday crowds have returned to their enclaves in Denver and Ft. Worth, Tampa and Rome, Dubuque and beyond, we’ve got our tiny jewel back to ourselves.

That’s the way we honyockers like it. Pleasantly dull.

Our morning lineup for freshly brewed caffeine at the Roasterie has shrunk tenfold. Après ski traffic no longer resembles a monster movie centipede inching its way down from Winter Park.

Another noteworthy item: Ozzie’s begun to relax. He doesn’t pant so often when roads are empty of exhaust fumes. His own breath clouds indicate as much. 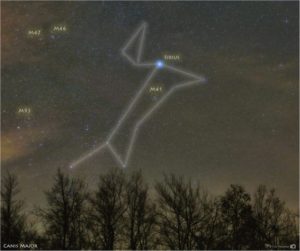 Tonight, we’re finally gazing skyward again. Alpha Canis Majoris, better known as Big Dog, hangs up there as if to remind us there’s more to life than peanut butter and beer and cheesecake. Within Big Dog’s vast array of stars, we spot Sirius twinkling.

What one might think of as the Beyonce of our night sky, Sirius shines brighter than an LED in our faces. It’s the brightest star in the sky south of our favorite constellation, Orion, also known as the hunter.

Astronomers tell us that Sirius lies only 8.6 light years from Earth, a distance that fails to impress Ozzie when I casually mention it. He simply likes the idea that the brightest star belongs to Big Dog.

Nearly any star will do in our pantheon of bling. So many stars, so little time to watch them here in the Rockies. We can’t decide which star to howl at. Thus, we keep our big traps shut except during a full moon, of course.

Just how bright is the night sky? So bright that a milky blanket of snow gleams in all directions and Ozzie, equipped with night vision goggles for eyes, stops to observe every distinctive signature along the road. Whether it’s the yellow cast or the aroma that gets his attention, I don’t ask.

He’s himself once again. Just plain Oz with breath that could use a dose of Listerine.

Like everybody lucky enough to call Fraser home sweet home, we thrive on peace and quiet, empty roads for him to sniff and me to throw him sticks on our walks. Coyotes call from miles away, which causes his ears to twitch. When Amtrak whistles its way through town, my own heart rate slows to a crawl. Mostly, we hear snow squeaking underfoot.

While impeachment hearings lumber on, we have our own investigations to worry about.

Ozzie leaps through deep powder near Devils Thumb for evidence of high crimes and misdemeanors by a red fox (or a coyote in a rabbit’s costume) that left her tracks suspiciously close to a 90-year-old cabin abandoned for winter. It’s a cabin we look after for friends who no longer live here year round.

No signs of a break-in. A sagging roof holds up under a thick slab of snow. Windows and doors remain locked tight on all sides. This case is closed.

We move on, me in snowshoes, he barefoot and much tougher than I am. Ozzie seems delighted to be here with me, his trusty sidekick. The feeling is mutual. Okay, we’re both delighted to be anywhere and never hide our wagging exuberance for life. You can see it in the way his eyes sparkle and his tongue hangs out. Mine too.

Returning to our astronomy lesson, Sirius comprises two stars posing as one star. Unlike most ancient things, Sirius is billions of years old but remains as energetic as a puppy slurping Red Bull. He tilts his head at me, making me wonder what he’s wondering. Why isn’t his name Sirius?

I suggest that Ozzie is a great name. Look at Ozzie Newsome, the old pro football star, and Ozzie Osbourne, the old singing star. Ozzie isn’t old yet but someday, God willing, he will be as old as I am.

We’re our old selves again.  Curiously skeptical of whatever catches our eye, such as a pair of huge black noisemakers over there on a snowbank. Before Ozzie opens his mouth, I know what he’s thinking. Those two ravens? They are actually undercover chihuahuas dressed in bird costumes.