Out n’ About: Life ever after – in the Fraser Cemetery

Across the road from Fraser’s popular tubing hill lies our local Cemetery. Nearly 500 souls have been laid to rest there, consisting of 420 marked & named graves and 75 unknown graves.

Fraser’s cemetery tells a fascinating story of this valley’s history and the men and women that were early settlers. To learn about the cemetery and its history I sat down with Kirk Klancke, President of the Fraser Cemetery Association and long-time resident. 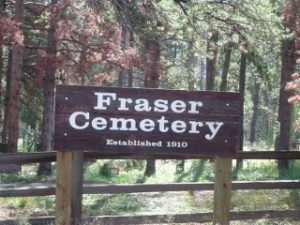 The cemetery was opened in 1915 by Frank Carlson Sr. as a private venture. In 1975, his son (Frank Carlson Jr.) donated the land to the Fraser Cemetery Association, an organization that maintains and improves the cemetery to this day. Originally you had to have a relative buried in the cemetery to join the association (Kirk’s father is buried there), but that rule was changed several years ago and now anyone interested in joining the Fraser Cemetery Association is welcome.

The first person buried was Colonel Gaskill, a civil war veteran (he was just a captain, but the community gave him a promotion in retirement). Gaskill was a major Grand County personality at the turn of the 20th century and in 1904 was named the Fraser Postmaster. Many others followed, and the various headstones tell their stories. According to Kirk, several graves and headstones stand out and are clearly self-designed. One unique marker recognizes a person’s love of Harley motorcycles by the iron cross as its headstone while another marks the grave of Tuffy, a logger whose grave can be found by a hanging hardhat between two metal poles.

There are also 75 “unknown” graves, many of whom were without means to buy a headstone marker. Although the cemetery started as a for-profit venture, Frank Carlson Sr. permitted many to be buried for free. A fair number of the those “unknowns” died during the great 1918-1919 flu pandemic. If they died on a train going through Fraser, the train would stop next to the cemetery and the bodies were left for the good citizens of Fraser to bury. The good people of Fraser took on this task without argument. Other towns were reported to prevent trains from even stopping and thereby limited the flu’s deadly spread in their towns.

Years ago, Kirk and others decided to honor those buried at the cemetery and placed headstones at every grave site they could find. Volunteers walked through the cemetery and once they found sites (primarily by noticing sunken ground that had been previously dug up) they marked them with a new headstone. These granite headstones were made by Sterling Monument and sold for just $25 each to the association.

In the 1980’s, the Jesuit Church sold land near the cemetery to a group of lawyers who planned to develop the land. Their modern survey showed that a part of the cemetery, and 1 grave, was on their land and they demanded the land back from the cemetery association. But the association and Fraser community fought back. Raising $5,000 and hiring a young but passionate attorney, the case went to court and presented an interesting dilemma to the court. What survey would take precedence, the historic survey or modern one? Ultimately a judge decided that the historic survey would stand, meaning that the cemetery remained in tack. A settlement was also reached with the attorneys and the town of Fraser purchased a 50-foot strip of land to separate the cemetery from future development.

There is a new trend with the arrival of “Green Burials”. With the hope of being more environmentally friendly, some are now choosing to be buried in a biodegradable casket or shroud.  Kirk told me that more people are inquiring about such a burial, and a few such burials are now occurring at the cemetery (and yes, there’s a Green Burial Council certification).

If you’re up county road 72, stop and take a stroll through the cemetery. There’s even a new Kiosk that informs visitors about the cemetery. It’s worth the hike.