Out n’ About: An interview with Santa

Another Christmas has come and gone. I hope everyone had a wonderful time with family, friends and holiday festivities. Of course, we know much of the credit goes to Santa Claus who is now enjoying some downtime and a few days of well-deserved rest.

I caught up with Santa on his way to his holiday and he graciously agreed to an interview. Feeling a lot of pressure to ask just the right questions, I asked him first about his time in Grand County this Christmas. To my surprise, he had his answer on the tip of his tongue.

“Well, I actually made a few stops in Grand County before the really Big Night, you know Christmas Eve. One of the first stops, and most fun, was the Festival of Trees about 3 weeks ago. It’s always at the Recreation Center in Winter Park/Fraser so it’s easy to find. There is so much joy and celebration there that I spent way too much time taking it all in.

When I first entered the hall it was amazing how many trees and wreaths were decorated by so many groups. After reviewing (I am an expert after all) each tree, I couldn’t decide on the best ones. All of the trees and wreaths were just so well done!  Next up was the deserts table (ok, really just great cookies, cakes and other treats). As Santa, I felt obliged to give each one a try (my diet doesn’t start until after Christmas).

After the table of treats, I dropped by to see 2 of my favorite assistants (or should I say Mr. and Mrs. Claus). As I saw the children lined up, and waiting patiently for their turn with Santa, I felt that all my training was worth it. I put a special treat in each of their stockings and couldn’t help but notice how Mrs. Claus looked so much like the real Mrs. Claus. Amazing. Next was the food station, and who could pass up free hot dogs.
I then asked Santa if he was disappointed by anything at the Festival of Trees. His answer surprised me.

My only regret was that my reindeer wouldn’t come in to see the festivities. They heard that there were Lions roaming around the entire hall. I tried to explain that they weren’t real Lions, but just the Fraser Valley Lions club that put this event together. After all, nearly1,000 people attended, 33 local non-profit groups participated and earned nearly $16,000, and so many children got to talk to Santa and Mrs. Claus. Maybe next year my reindeer will come in to join in the fun!

Last question Santa. Do you have any final thoughts?

I should mention that I didn’t mean to scare anyone at the Ski Resort’s Torchlight Parade. I was warming up my reindeer to deliver the Christmas gifts when Rudolph noticed this strange carriage going up the ski hill. He’s got quite a mind of his own and just took off and I had trouble controlling him.  Flying low over your Competition Center he led the team (and Me) over the start house and raced those strange things up the hill. Of course, those “carriages” were just the new Winter Park Gondolas. Rudolph counted each Gondola as we flew over and didn’t care that they were still in test mode. He enjoyed the thought of smoking them this year and said he’d be back next year for a real race. I enjoyed Winter Park so much I even skied down with the Torchlight parade team.

So, those are my best memories of my Grand County visit. I’ll be back next Christmas!”

My interview ended, and Santa went off on his vacation. All’s well that ends well. 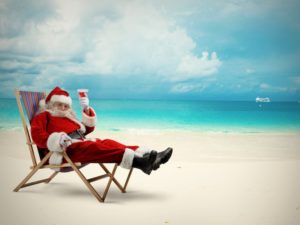