Close encounters of the moose kind 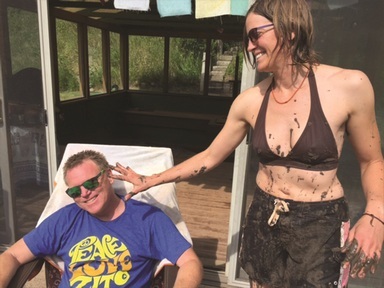 The moose whisperer was cooing to a young adult who was wandering through the yard.

“You behave yourself now,” he added as she ambled off.

This gangly young male moose was at least 5 feet tall and probably weighed 400 pounds. He was walking right past the front door. Unfortunately, I was not there at the time, but I knew I would eventually have my own close encounter of the moose kind.

I have waited a long time for this. Supposedly moose are everywhere but I had not until very recently seen one in the wild outside of Yellowstone, and that was a long time ago and a long way off.

A couple years ago someone announced that they just saw a moose walking down Main Street in Carbondale. I went down there to see if I could find it cavorting with the cattle drive but saw nothing. I then heard via social media that the moose was wandering the dog park. I went there straight away but there was no moose. If I thought I was going to meet a moose on my own terms I was sorely moostaken.

I thought I might have had one last year. I was walking up a trail above Redstone and I smelled a gamey stench that set me into alert mode. It turns out there was a mighty elk several feet away just off the trail in the brush. The thing was huge and smelly but not a moose.

Then my luck changed. I was walking a trail in the Experimental Forest about a month ago. My dog was trailing behind, off leash. I rounded a corner on the single track and came right up on a large male cooling the blood in a marshy stretch of mud and water. Mr. Moose jumped up and stared as I froze in a combination of wonder and fear. I usually carry a camera or phone for such occasions but of course I had nothing.

I turned and scooted back around the corner and left that moose to his own devices. My dog, Chooch, never noticed the moose, and I still wonder what would have happened if he had. Disaster was averted as we switched our plans.

I have been doing a little stand-up paddleboarding at Beaver Lake in Marble and recently saw another moose wetting her whistle at the water’s edge on the far side of the lake near the reedy marsh. She did not look up as Chooch and I observed from the middle of the lake. Camera? Nope.

It’s official. I have been introduced to moose in the wild and so far, so good. As a matter of fact I saw the biggest one yet just this week along a creek in the Experimental Forest. Even though he was several hundred yards off his massive rack was impressive.

Not everyone has such luck. I’ve seen videos of angry moose chasing snowmobilers and hikers on trails. Moose are fast so don’t plan on outrunning one.

Even though they were probably not a native Colorado species, they were introduced to the state deliberately in the late 1970s. The state-run introduction program was meant to attract tourists and hunters. That’s kind of a big deal as we are now encountering 900-pound beasts with huge racks and long beards.

And moose don’t have predictable migration habits like elk. Elk are extremely orderly in their migrations, sticking together and heading to lower elevations in the winter months. The long-legged, more insular moose is better equipped to operate in deep snow and will often stay in the higher elevations in winter.

And moose don’t always bound off like other wildlife. They often simply stand around when encountering humans, but they can be set off easily by dogs, which are often at the center of moose encounters gone wrong. Female moose with young offspring are also known to react when surprised on the trail.

The Denver Post reported last summer that moose are making their way east and have been seen in shopping malls in Boulder and in people’s flower gardens in Arvada. The article noted that there has been an increasing amount of vehicle accidents involving moose along I-70 east of the Continental Divide.

These accidents are often fatal to motorists because moose can reach 6 feet tall at the shoulder and weigh upward of 1,200 pounds.

What do experts at Colorado Parks and Wildlife say to do when you encounter a moose? Know the signs of aggression, which include laid back ears, raised hairs on the neck, licking of the snout and the dreaded rocking back and forth.

If threatened you are supposed to stay calm, don’t run, talk gently and back away real easy like. If the moose charges, drop these pretenses and run for your life. Try to position yourself near a big rock, a tree or a car. Whatever you do, don’t rock back and forth.

Steve Skinner keeps Chooch on a leash in moose country. Reach him at nigel@sopris.net.