And the winner is … A postcard from Fraser!

Last weekend’s first annual Fraser Mountain Mural Fest was a winner. Watching blank boards transform into things visual and stunning was a real treat. I really had no idea what to expect so my expectations were low. (I like to start at the bottom and work my way down).

The day before the event I was scouting things out to set up a sound system for KFFR and the vibe from the organizers was surprisingly chill. I’ve been around a lot of events and event coordinators and sometimes the behind the scenes atmosphere can be rushed, tense and terse. Relax, it’s Fraser.

Dominic from “Good to Go porta-potty company pulled up with his co-worker and started juggling plastic toilets like they were tennis balls. I’ve met this guy before and am always impressed with his strength, happiness and good to go attitude. Makes me want to get into the excrement collection business. After all, we live in a very effluent society. I’ve cleaned enough groovers (river camping toilets) to be inured to almost anything humans can do from behind. Bring me your wurst!

Barry from Fraser Valley Distilling next to the “Mural Park” was happy and helpful providing the event with water and electricity, no strings attached (except for the extension cables). The park is on the site of the future Fraser Center for Creative Arts. Designs for the new art center were on display at the Town of Fraser tent. If that center gets built as designed it will take this place to a whole new level, making it feel like you’ve left planet earth when you turn off that highway.

I guess this was a mural competition. I don’t approve of pitting artists against each other as art is such a subjective thing. But, the mood at the festival was hardly competitive and the artists were supportive of each other and happy to be there, making history at our first annual mural festival.

Visual art is mysterious to me and I would make a lousy judge. I probably would have tossed artists like Pablo Picasso and Andy Warhol out of a competition for presenting paintings of discombobulated humans and realistic Campbell’s soup cans. Still, watching someone transform a blank board into an object of imagination is fascinating and each artist had a very different approach. 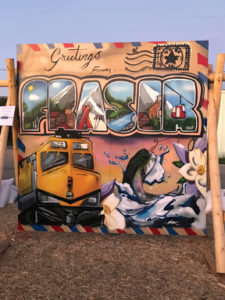 The winner of the Themed Category and People’s Choice was a “postcard” made by Denver artist Hector Palacios. As the weekend unfolded I would never have guessed that this would be the winner. It was soft and out of focus until Hector pulled it all together with spray paint in the final hours. He had a vision that only he could see in his mind.

Other, more sophisticated enthusiasts understood what Hector was doing. Local artist and Fraser Public Arts Committee member Ernie Roybal was telling me how special Palacios’ piece was long before I could see it as anything more than a hastily spray painted choo-choo train. That train turned into a classy postcard that captures the essence of the Fraser Valley … a locomotive, the gondola, the mountains, lakes, rivers, flowers and clouds … he nailed it!

Other artists ranged from pros to first-timers and all the 8ft by 8ft panels have their own charm and distinct qualities. I really appreciate the fact that there were locals and far flung visitors among the artists. Diversity on parade. There was supposed to be an artist from India in attendance by apparently he got turned back at the gates of America. Perhaps next year it will be an international competition.

The event was peppered with classic Fraser Valley weather. There was blazing hot sun, wind, rain and everything in between but the artists adapted and continued through it all.

The two-day fest was punctuated by a performance from local troubadours, “Hunker Down.” Thanks to the organizers for using local talent for the music, instead of a semi-big regional act that we’re supposed to gawk at. Where I come from the local arts council rarely uses local musical artists, which does nothing to promote local musicians. I’m glad to be here now where local art is still in the mix. And local gin.

Steve Skinner has been shuffling around Tabernash in his escape pod. Complain to the county or reach him at nigel@sopris.net.