An iconic trip over Cottonwood Pass

Today’s society all too often assigns “iconic” status to certain primitive species of pop culture, such as the likes of a warbling creature called Justin Bieber. Sheesh!

Yet America’s genuine icons gather dust in books or they lie dormant in the cobwebs of old timers’ minds, waiting for any excuse to shine again.

Take the Western rancher, that iconic figure in a Stetson, personifying diligence, determination and ragged dungarees.

While you’re at it, take his trusty quadruped, an iconic figure of steadfastness and smarts.

That’s precisely what 30 of us did this summer smack dab in the middle of Grand County.

We rode horseback over Cottonwood Pass led by Merrit Linke, a rancher whose ancestors homesteaded near Granby in the 19th Century. (For the record, he’s also a Grand County commissioner who studied physics at the University of Wyoming.) 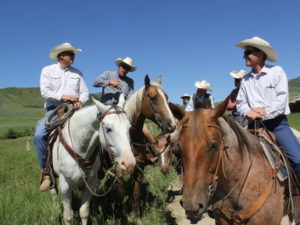 Full disclosure: I rode a big mule instead of a horse. It was the wrangler’s idea. He assured me that “Ernie is as strong as four horses” when I stuck my boot in Ernie’s stirrup and swung my leg over his saddle.

As it turned out, Ernie carried me at a good trot, followed my lazy steering to the letter, and never showed any of that stubbornness for which his brethren are famous.

We were 30 or so dungareed city slickers who deserted the comfort of our SUVs for the herky-jerky ride of a lifetime over Cottonwood Pass, a 9-mile journey from high in the saddle. (Some chose to make the trip aboard horse-drawn surreys, instead.)

This iconic ride was born to revive popular interest not only in the deep-seated values (freedom, resourcefulness, animal husbandry) of our storied past but in salvaging them for future generations. Otherwise, these things disappear like dust in the wind.

So it was fitting that our final destination was Pioneer Village Museum in Hot Sulfur Springs, where the history of Grand County is enshrined in artifacts dating back thousands of years. (Grand County Historical Association and Headwaters Land Trust organized this ride, branded History on Horseback, as a fundraiser for the two nonprofits.)

We showed up at the Linke homestead to discover what it’s like to rough it for several hours in the saddle, jolting to the clippety-cloppety rhythm of a thousand pounds of horsepower, soaking up July sunshine, and as the day wore on, imagining how tough the leathery hides of our own ancestors’ rear ends must’ve been.

Our vintage trek from Linke’s ranch near Granby to Hot Sulfur Springs, traced the hidden ruts of that old wagon road. Along with bellowing cattle that scattered when we intruded on their turf, there leaned a few silent icons—mostly dilapidated barns—against the ravages of time.

Linke, our tour guide on horseback, announced in his booming voice that his great-grandfather settled here in 1883 and never left. “Imagine that!” I said to Ernie, who ignored me.

The old wagon road, now little more than a single-track trail diverging from County Road 55 up into grassy pastures and aspen woods, runs steeper and more scenic than the county’s dirt-and-gravel version.

We ascended Cottonwood Pass, elevation 8,900 feet, several miles before arriving in Hot Sulfur Springs, the county seat and home to 663 residents, according to the last census.

By the time we reached civilization, I was tuckered out but Ernie looked raring to ride back over the pass. I bade him goodbye with a pat on his butt and headed for lunch with the other city-slickers.

It’d been a mind-blowing trip, one that won’t soon be forgotten, no matter how many cobwebs clutter up my memory bank.

Speed was not an issue, of course. Never once looked at my watch. Never asked Ernie to gallop either.

But when I got home, I opened up a tattered paperback off my bookshelf. Decades after it made the bestseller list, Larry McMurtry’s Lonesome Dove is still an icon for me.