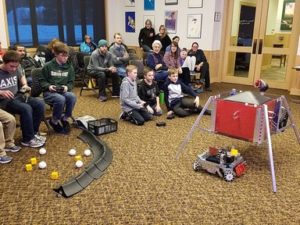 In November 2018, the Town Council approved a $500 donation to the East Grand Middle School Robotics Team to help the teams purchase materials to build their robots and participate in regional competition. When council approved the donation, the students agreed to come back and give a demonstration of the robots they built for the competition.

On Tuesday night, the students made good on their agreement and gave a demonstration of their robotic builds. While the students, who competed primarily with high school students, did not move on to the state competition, their spirits were high as they look forward to next year.

The second reading and public hearing for Ordinance 520, which amends Title 3 of the Town Code by adding a new Chapter 8, establishing a Disposable Bag Fee of $.20 per bag was the next action item for consideration.

During the public hearing, one resident asked the council, “I’m trying to figure out what we are trying to do with all these regulations. Plastic bags and straws are easily recyclable. Who’s impacted? The tourists, who are already paying the highest sales tax in the state. It seems like we’re going overboard”.

A second spoke in favor of the fee, describing the positive impact the fee has had in Breckenridge, which has resulted in a cleaner town overall. The resident told council that hotels in Breckenridge offer their guests reusable bags to take with them when shopping, and, grocery stores also offer customers free boxes to use to carry groceries in lieu of paying for bags.

Winter Park’s Disposable Bag fee is similar to the Town of Fraser’s which takes effect on April 1. Winter Park’s Ordinance has a few differences from Fraser’s, most notably, the fees do not apply to shoppers using any form of food assistance, and, it is subject to review by council after one year.

Councilman Jim Myers assured the public that council would review the Ordinance in July 2020 and make any appropriate “tweaks” at that time. Mayor Jimmy Lahrman added that the Town would also be working with the Chamber to create a supply of Winter Park-branded reusable bags and would work with lodging companies to make them available to visitors.

Council approved Ordinance 520 unanimously, with all members of council present.

Beginning on July 1, 2019, the $.20 Disposable Bag fee will take effect in Winter Park. All affected retailers will retain 40% of the fees collected to provide education to consumers, develop and display signage, train staff and administer the program. The 60% the Town collects will be used for administrative costs, education, funding development of infrastructure designed to reduce waste and community cleanup efforts, and, contributing funds to the local Pay-As-You-Throw trash and recycling program known as “The Drop”.

According to Winter Park Town Manager, Keith Riesberg, “The Town of Winter Park does not currently contribute funding to The Drop. We are hopeful that this ordinance would be a way for us to do so. The Winter Park Town Council sees tremendous value in having a regional recycling facility such as the one operated by the Town of Fraser. They wanted to keep the language of supporting The Drop in the ordinance in the event sufficient funds are generated that we could legally use them for this purpose”.