The final town council meeting of 2018 was held on Tuesday, December 18. It was also the last morning meeting, since council had voted to move all meetings to 5:30 pm in 2019.

The Winter Park and Fraser Chamber had submitted a Special Event Permit application for the New Year’s Eve Festival at the Rendezvous Events Center at Hideaway Park. The festival starts at 8:30 pm and will include sledding, hot chocolate and fireworks at 9 pm. Council approved the permit unanimously.

Resolution 1667 pertains to the renewal of the Agreement for Services with Slate Communications. Slate had been contracted in 2017 to help the town rebrand, develop their new logo and has helped with the town’s communication efforts by adding a newsletter and more social media outreach. Slate CEO, Kim Newcomer, told council the number of subscribers to the town’s newsletter is growing and, their plans for 2019 include increasing the town’s social media presence and improving website user-friendliness. Slate provides the town with quarterly reports that show traffic, engagement and click-rates, but there are currently no specific metrics in place. Slate also manages most of the comments received on social media, contacting the town for support when needed.

Town Manager, Keith Riesberg, told council “We want to make more progress on social media”. The goal is to get “more engagement on specific projects, such as the downtown plan” and to engage both local businesses and residents. The Agreement for Services with Slate was approved unanimously at a cost of $52,000 annually. Website work is proposed at an additional expense.

Next, a local liquor license hearing was held for a transfer of a hotel and restaurant license. Matthew and Ellen Cowman had applied as wp Cowboy’s Inc dba Hernando’s Pizza Pub, Ltd following the purchase of the business from Jeff and Kimber Davidson in November. No comment was given during the public hearing and, since Town Clerk, Dani Jardee confirmed that all required information had been submitted with the application, council approved the license transfer and wished the new business owners the best of luck.

Resolution 1668, a Development Improvements Agreement for Arrow at Winter Park Inc, was next reviewed by council. Community Development Director, James Shockey, told council this is a standard development improvement agreement for paving, landscaping, drainage and street improvements that relate to the entire parcel. The timeline shows landscaping work will begin in spring 2019 and asphalt in another year or so. The developer confirmed that clean-up on Lions Gate Drive will happen as buildings come on line. Council approved Resolution 1668 unanimously.

James Shockey presented Resolution 1669, the town’s “Imagine Winter Park” Master Plan approval to the council. The Plan had been reviewed by the Planning Commission at the December 11th meeting and there were no recommended changes. Shockey told council the Planning Commission is the official body that reviews, develops and adopts the Plan. Council’s approval would move the Plan to a January 8th public hearing for final adoption.

Shockey told council that they had been working on the Master Plan for a little over a year. “It will help grow the town as envisioned”, said Shockey. Town Planner, Mara Owen, had put together an Executive Summary in an easy to read format, highlighting the four visions adopted using input from the community and stakeholders during various workshops held over the course of the last year.

Shockey stated that, once adopted, the Master Plan will be available online and will be divided by chapter, with links to each. The town will use social media to advise the community when it is available.

Shockey told council that the Slopeside Condominium homeowners had expressed they would like to change a street name from Clover Lane to Kinney Way, after Slopeside developer, Tim Kinney, who had constructed the 33 units between 2000-2012. “It is a private road”, said Shockey. “Emergency services supports it as long as road signage is changed and is reported to all utility companies, 911 dispatch and the fire department”. The homeowners “have agreed to foot the bill for new signage”, said Shockey. Map updates, such as google maps, will occur over time as the information is picked up. Council advised Shockey it is okay to start the process of drafting an ordinance for adoption of the name change.

Scott Ledin, Director of Parks, Recreation and Golf, told council the Fraser Valley Metropolitan Recreation District (FVMRD) approved their 2019 budget at their December 11th meeting. The 2019 budget includes $550 for capital projects such as cart path paving at Pole Creek Golf Club and a “new used” ice resurfacer, often referred to as a “Zamboni”, but the model they’ve selected is an Olympia ice resurfacer. 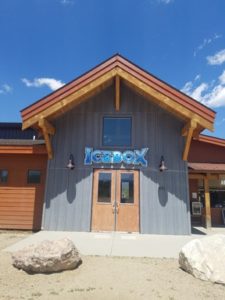 Ledin told council the ice rink refrigeration project had been completed. There are a few punch-list items that Tolin Mechanical is working on. He explained that there had been delays with the new chiller unit, but, because it’s been so cold, “mother nature helped out with natural ice before the unit was operational”. Ledin added that “the new unit hadn’t run much due to the cold temperatures, saving us on utility bills”. Ledin told council the project had been a great experience, especially serving as the contractor for the project. He was thankful for all the community support. Ledin estimated the amount of donated materials and in-kind labor totalled over $100,000. Additionally, the town’s and private donor support are all greatly appreciated.

Ledin told them the Icebox Rink had also added a new meeting room which will be used for board meetings, birthday parties, etc., and, there was a bleacher crew putting in custom designed bleachers and adding lines to bring in additional heat to the bleacher section. He told council that Denver teams love the rink, but, they’re used to indoor rinks in the city and are not expecting it to be outdoors. They are planning a ribbon-cutting ceremony for January.

He told council they continue to look at possible Rec Center expansion to add space for indoor sports such as soccer, lacrosse, baseball and tennis. Since the main utilities come in on the north side of building, they are unable to expand in that direction as they had originally hoped. A developer has offered the district additional space, but it comes with floodplain issues. The fitness area could be expanded with no additional footprint, but does not add enough room for the other sports that require a larger space. “We are continuing to look at it to understand the options”, said Ledin.

Mayor Lahrman told Ledin that, with construction of the new public works facility on the existing property, the town is looking at relocating the public works facility temporarily to an offsite location. This could potentially provide an opportunity for the town and the district to work together to use the property initially for public works, until the new facility is completed and then repurpose it for a field facility. Mayor Lahrman asked Ledin to work with capital projects and parks manager, Gerry Vernon, on this as a partnership.

The district is also continuing to look at a lease agreement with the Foundry Cinema & Bowl. They have arrived at a structure agreement with a 2 year lease, with potential for purchase in 18 months. “Long-term lease language didn’t make sense”, said Ledin.

Winter Park & Fraser Chamber of Commerce executive director, Catherine Ross, told council they held their last brand launch event Friday night at Ullrs Tavern. It was well attended and well received. They handed out quite a few t-shirts and stickers and heard nothing but positive feedback. Ross told council there had been great follow up by the Denver press following their launch in November. “It’s rejuvenated interest in what we are doing”, said Ross.

Jazz Fest tickets went on sale Cyber Monday, and they are close to finalizing the artist line-up and schedule of summer events. Chamber staff is also working on the launch of the toolbox for businesses to utilize with the new brand.

Mayor Lahrman asked Ross if the number of people issued tree cutting permits had tripled this year. Ross said they had added Fireside Market to the list of permit locations, but no count was available at this time. “It’s a very successful program for bringing people into the valley”, said Ross. Lahrman agreed, recalling the number of cars he’d seen parked on town roads with trees on top.

After the council meeting, at the start of the workshop, council granted Ross a few minutes at her request. Ross told them she wanted to let them know that Grand Foundation would not be running the bars at the events next summer. The Chamber will be looking for a new contractor to take over the role and will be putting out an RFP soon. Ross said they are also exploring different opportunities where an organization could take the lead on an event, such as Uncorked or the Run for Independence, which would allow them to raise funds for their organizations and take some stress off of the chamber staff.