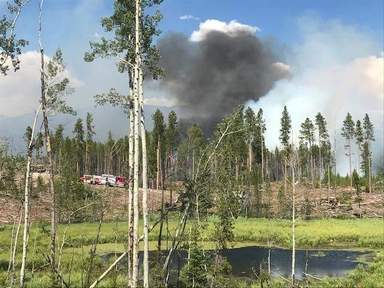 Grand Lake’s Golf Course fire, which broke out Thursday afternoon around 2:30 pm, is reported to be at 60% containment . The fire has burned about 20 acres, and hot spots coupled with dry, windy conditions dictate conservative precautions. No structures have been damaged by the fire. Approximately 450 residents in the Columbine Lake area on County Roads 48 and 49 are still under an evacuation order, while residents on County Road 491 were allowed to return home earlier today with instruction to remain vigilant in case another evacuation is ordered via the CodeRED system. 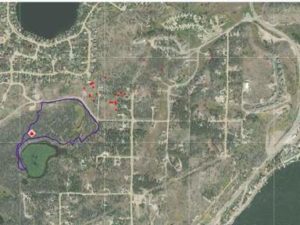 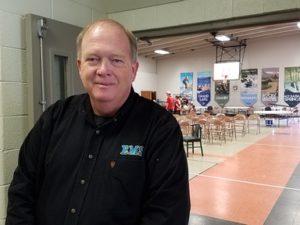 Incident Public Information Officer and EMS Chief, Ray Jennings, told the Winter Park Times that responding agencies and local businesses have provided a great amount of support to the ongoing efforts. He said “It is a ginormous team effort, which makes a difference” in mitigation. “The safety of our residents, their pets, our water resources, wildlife and property are all part of our work here”. The “firefighters are all volunteers and their safety is most important”, said Jennings. Responders have worked tirelessly, with little rest, since the fire was reported on Thursday. 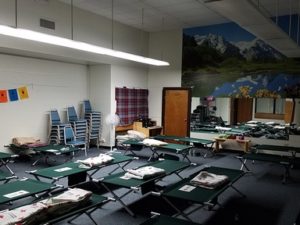 The Grand Lake Center (former Grand Lake Elementary School) at 301 Marina Drive is serving as the Evacuation Center and members of the American Red Cross are on site to assist those that have been evacuated. Last night, 32 people stayed in the Center, while another handful of residents camped in the Center’s parking lot. The Center will remain available to those needing shelter until all evacuation orders have been lifted. The cause of the fire remains under investigation. 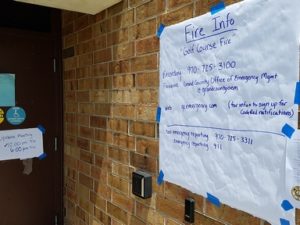 Residents were very grateful for the quick response of multiple agencies, quelling a fire that was a little too close to home. Business owners were also very relieved and want everyone to know that the Town of Grand Lake is very much “open for business”. 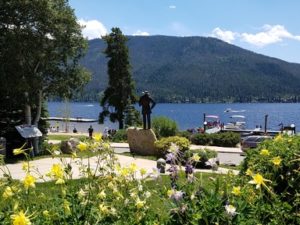 UPDATE: At the 6 pm briefing at the Grand Lake Center, Public Information Officer and EMS Chief, Ray Jennings announced that the Columbine Lake evacuation order had been lifted. He told attendees that County Road 49 has been reopened, but, Golf Course Road would remain closed. He asked that, if someone sees a fire south of that road, not to call it in, because that is the area the firefighters are still working in. However, he asked that if someone spots a fire north of that road, to call that in immediately! County Road 48, 471, Kinnikinnick  and Deer Drive will be barricaded as they continue to work to extinguish the fire. A crew of 20 will resume activities in the morning. The Grand Lake Center will be closed  to evacuees tonight, since the evacuation order has been discontinued. “Please go enjoy and resume your normal life”, Jennings told the crowd. Updates will continue to be posted at gcemergency.com. 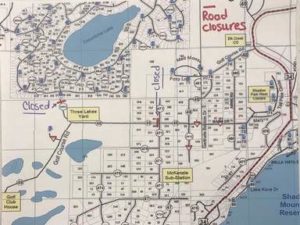 UPDATE:  Agencies will be working throughout the day to transition management back to Grand Lake Fire Protection District. Any fire updates will be posted to their Facebook page. The fire is currently 70% contained with an anticipated 100% containment by end of day. CR 48 remains closed from CR 471 to Deer Drive. Please do not enter the closed area; this causes interference with fire suppression efforts. 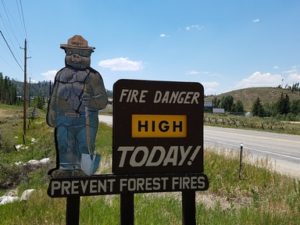 The Sugarloaf Fire, which was reported at 7:19 am on Thursday, is burning in beetle-killed lodgepole pine and Spruce fir, 13 miles southwest of Fraser in a remote area of the Williams Fork Valley in Grand County. It is estimated at 845 acres. It burned up to the tundra on the northeast side, where it laid down last night. Fire is still actively burning in the Darling Creek drainage.

An area closure in the fires vicinity is expected to go into effect later today for public safety related to smoke. This closure will likely impact some trails, roads and campgrounds near the fire. Weather today is similar to yesterday and a smoke column is visible this afternoon from the surrounding area.

A Type 3 Management Team is on order and expected to take over management of the fire tomorrow morning. A Type 3 helicopter and U.S. Forest Service firefighters are assigned to the fire.  Due to the steep rugged, terrain of this fire, as well as the amount of beetle-killed timber, firefighters are monitoring the fire to ensure public and firefighter safety.

The fire had moderate growth today and is at 1,311 acres

Grand County enacted Stage 1 Fire Restrictions on Thursday, and, on Monday, July 2, the Grand County Commissioners will meet at 1:30 pm to discuss sufficiency of the current restrictions and determine whether an increase in restriction level is needed.

As for 4th of July fireworks celebrations, the Winter Park & Fraser Chamber of Commerce announced cancellation of the fireworks, scheduled for 10 pm on July 4th. Instead, with a tagline of “Fire restrictions, not fun restrictions”, they will project a video display of fireworks on the Jumbotron at the Rendezvous Event Center at 10 pm.

The Town of Grand Lake met Saturday and also decided to cancel their 4th of July fireworks.

The Town of Granby’s fireworks celebration at the Flying Heels Rodeo grounds, and Kremmling’s Fire up the Cliffs events are still scheduled to take place at this time.

The next few day’s weather forecast calls for afternoon showers, which will hopefully bring relief to firefighting efforts. All are reminded to use extreme caution with any open flame and to be Wildfire Ready.