Way too close to home! 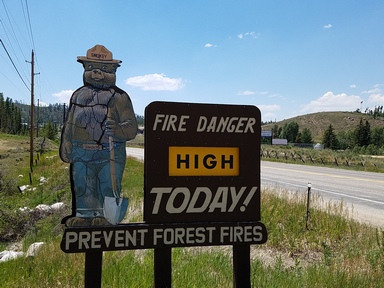 On the same day Grand County enacted Stage 1 Fire Restrictions, June 28th was a turning point in Grand County as two wildfires broke out within hours of each other.

At 7:19 am, the Sugarloaf Fire was reported, a result of a lightning strike the night before. As the day went on, the large plume of smoke concerned east Grand County residents located just 15 or so miles northeast of the fire.

Located primarily on undeveloped Forest Service land, the Sugarloaf Fire is in a steep, rugged area, with few roads and safety zones for firefighters. At over 1,200 acres, the Type 3 Incident Management Team, led by Incident Commander, Mark Giacoletto, has a number one goal of protecting the public and firefighters, followed by protection of private and public property and infrastructure.

The fire is being managed under a suppression strategy. With many standing dead trees, the threat of tree fall is significant and crews are actively scouting areas for control lines and helispot locations. They have also laid hose at Trails End Ranch and Gumlick Tunnel, are working on structure protection at Ute Park Ranch and coordinating efforts with Henderson Mine, Mountain Parks Electric and other stakeholders in the area.

There are currently no homes or businesses threatened by the fire, which remains at 0% containment.

Grand Lake’s Golf Course fire was reported around 2:30 pm that day and burned about 20 acres close to the Grand Lake Golf Course and south of Columbine Lake. By Thursday evening, 300 homes and about 450 residents were evacuated as the fire neared residences on County Roads 48 and 49. The Grand Lake Center was activated as the Town of Grand Lake’s Evacuation Center and housed 32 displaced residents and several campers in the parking lot that night.

Incident Public Information Officer and EMS Chief, Ray Jennings, told the Winter Park Times that responding agencies and local businesses provided a great amount of support to the ongoing efforts. He said “It is a ginormous team effort, which makes a difference” in mitigation. “The safety of our residents, their pets, our water resources, wildlife and property are all part of our work here”. The “firefighters are all volunteers and their safety is most important”, said Jennings.

The evacuations were lifted Friday evening and residents were allowed to return home with instruction to remain vigilant in case another evacuation is ordered via the CodeRED system. The fire was at 100% containment by Saturday evening.

By Monday, July 2nd, 4th of July firework displays had been cancelled by the Towns of Winter Park and Grand Lake. With an extended forecast of hot, dry and windy conditions, the Grand County Commissioners unanimously voted to raise the County’s Fire Restriction level to Stage 2, and, the USFS and BLM quickly followed suit. 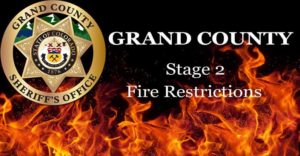 Activities that are still allowable under Stage 2 Fire Restrictions:

Violations of Stage 2 Fire Restrictions carry fines of up to $1,000 plus associated court costs.

With fires burning across the state, residents and visitors should follow the above restrictions to keep Grand County safe from any more unwanted fire activity.