Part 2 of a Multi-Part Series:  Water History and a look into the future.

Grand County is home to the headwaters of the famed Colorado River — the river that brings water to five other arid Western states. Our water is the lifeblood of semi-arid Colorado and Grand County is one of the most water-rich areas in the state, and yet faces a shortage due to historical water agreements and plumbing projects started in the late 1800’s. The deplition of the rivers natural flows has changed the ecosystems of the entire 15 mile reach of the Fraser tributary.  The is part two in series, Water: Then and Now.

The idea of diverting water from the Colorado River on the Western Slope of the Continental Divide to Denver and the farmlands of the eastern plains had been a dream of planners as early as 1890.

Denver Water may be the largest, oldest and most famous water utility in the state, It’s service area covers more than 335 square miles, including the City and County of Denver and several suburban distributors but the Grand Ditch was the first effort to move water from the west slope across the continental divide. 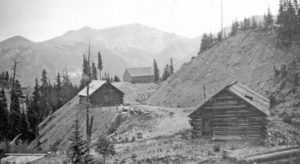 This is the seventh and last construction camp along the Grand Ditch. These structures were removed in 1997 by the owners of the ditch, the Water Supply and Storage Co. of Fort Collins. (Courtesy of Rocky Mountain National Park)

The Grand Ditch, as it is known today, set a precedent for water law in the state. That period of Colorado’s history was still fairly untamed. The agreements that were made in that era had very little opposition because very few people lived in and around the mountainous regions at the source. “The Grand Ditch started the movement toward economic growth in Colorado. Moving water from the snowfields of the western slope to the farmlands and populated areas solidified the growth potential of the front range.” according to local historian, Tim Nicklas, Grand County Historical Association.

In 1891, the Water Supply and Storage Co. started work on the Skyline ditch, the first major source of water from west of the Continental Divide to flow into the Cache la Poudre basin. The Skyline Ditch was he beginnings of what would eventually become the most ambitious project, the Grand River Ditch, that all started with a survey in 1890.

It began as the modest three quarters of a mile long Bennett Ditch dug from 1896 to 1904, and became known as the Grand River Ditch when it was extended five miles to Big Dutch Creek.

By 1911, it had reached Mosquito and Opposition Creeks. In 1934, well after Rocky Mountain National Park was established, the ditch was extended to Baker Gulch.

As a side note, the Colorado River was originally called the Grand River, thus the name for the ditch. After the name change in 1921, the Grand River Ditch became known simply as the Grand Ditch.

During the decades it took to complete the Grand Ditch, there were seven construction camps that varied in size according to the manpower required. Within each camp, there were bunkhouses, mess halls, powder magazines, blacksmith shops, garages, maintenance buildings and so forth.  The camps took the form of small communities. Horses and humans provided labor at the early camps, which were spaced about two miles apart. At the last and seventh camp, the buildings remained until 1997 when the owners of the Grand Ditch had them removed.

In its 15.2-mile length, the Grand Ditch diverts water from a dozen creeks that would have otherwise flowed into the Colorado River. All but the very south end of the ditch is within Rocky Mountain National Park.

An estimated 40-50 percent of the water in the upper Colorado River Basin is sent over La Poudre Pass into the Cache la Poudre River basin. The starting point, La Poudre Pass, is at an elevation of 10,175 feet and the end of the ditch, Baker Gulch, is a at about 10,300 feet. The ditch maintains a constant grade.

In 1927-29 and outside of the park, Long Draw Reservoir in the Cache la Poudre basin was constructed to hold back surplus water and allow for an even release throughout the year.

Although the Grand Ditch is a necessary element in the growth of agriculture and cities along the Front Range, it is a scar across the otherwise pristine Never Summer Mountains. For this reason, it has been a long-standing source of controversy. 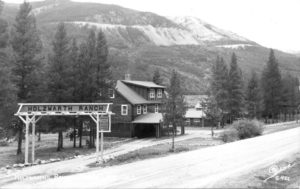 This early view of the Holzwarth Ranch with Trail Ridge Road in the foreground, plainly shows the scar left by the Grand Ditch cutting across the Never Summer Mountains. (Bobbie Heisterkamp postcard collection)

The Grand Ditch Storyline was developed by Kenneth Jessen, a Loveland resident since 1965. He is an author of 20 books and more than 1,600 articles. He served on several Loveland boards and was an engineer for Hewlett-Packard for 33 years.

The next part in the series we will take a look at The Colorado-Big Thompson Project , the largest transmountain water diversion project in Colorado.  Built between 1938 and 1957, the C-BT Project provides supplemental water to 30 cities and towns. The water is used to help irrigate approximately 640,000 acres of Northeastern Colorado farmland.

Twelve reservoirs, 35 miles of tunnels, 95 miles of canals and 700 miles of transmission lines comprise the complex collection, distribution and power systems. The C-BT system spans 150 miles east to west and 65 from north to south.

Read Part 1 of the Water Series: Landing A Healthier River >>

Northern Water Conservancy District last month cleared one of the last hurdles for it to begin pumping more water from the Upper Colorado River to thirsty Front range cities, according to the Associated Press.

The U.S. Army Corps of Engineers issued a permit May 17 for construction of Chimney Hollow Reservoir in the foothills about 50 miles north of Denver. The permit, which some opponents told the AP they intend to challenge in court, was the final regulatory step necessary for building the 90,000-acre-foot impoundment that will be used to store water pumped from Windy Gap Reservoir.

The water will flow to the Front Range through the Alva B. Adams Tunnel, which runs under Rocky Mountain National Park from Grand Lake to the Big Thompson River, from which it can be moved into the new reservoir.

Water providers that will pay for and benefit from  Chimney Hollow Reservoir include the cities of Broomfield, Erie, Greeley, Longmont, Louisville, Loveland, Superior, Evans, Lafayette and Fort Lupton, as well as the Central Weld County and Little Thompson water districts, according to AP.

Construction could begin in early 2019.