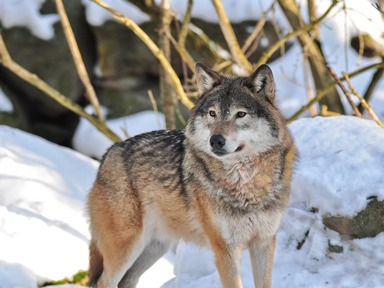 A group of wolves has again been verified in Moffat County. It is likely that the latest sighting is the same pack previously seen in that area.

A member of the public spotted the wolves on Tuesday, March 3, providing a credible sighting report of seven wolves. District wildlife managers were able to investigate and visually verify six wolves in the reported area on Wednesday, March 4. The location of this sighting was several miles south of the January sighting location. Over the past few weeks, wildlife managers have heard from area residents about howling, carcasses, and tracks but actual sightings remain rare. Wolves travel over large distances, especially when establishing new home ranges, so the movement and new sightings are not surprising.

As a federally endangered species, wolves in Colorado remain under the authority of the U.S. Fish and Wildlife Service. Colorado Parks and Wildlife works closely with federal partners to monitor wolf presence in Colorado. The wolves migrating into Colorado are likely from larger populations in Wyoming, but could be from populations in Idaho and Montana.

CPW reminds members of the public that killing a wolf in Colorado can result in federal charges, including a $100,000 fine and a year in prison, per offense. Instead, the agency requests that the public give wolves space, and report any sightings to CPW as soon as possible. For more information, visit the CPW website.