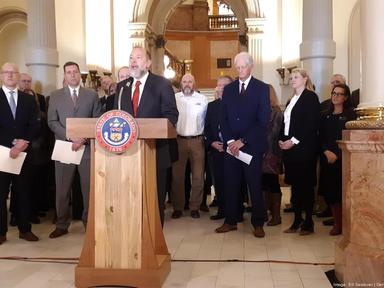 The call for cleaner energy from state legislature and its members seems to have resonated with local energy supplier Tri-State Generation and Transmission as they announced new measures to cut back on coal and increase renewable energy sources as they move forward with the co-op’s 2019 Responsible Energy Plan.

On Wednesday, they announced they will start replacing that coal power with solar, wind and hydropower, achieving a 50 percent cleaner energy grid by 2024. Currently, almost half of Tri-State’s power is estimated to come from coal plants, and 70 percent overall comes from fossil fuels. Tri-State’s recent announcement stated that it would close all the coal generation and mining operations in Colorado by 2030, and cancel plans for an additional coal plant in Kansas.

Tri-State’s senior manager of communications and public affairs, Lee Boughey, wrote, “It is significant transition in how Tri-State serves its member electric cooperatives and public power districts. We are able to make this transition rapidly while maintaining stable rates.”

Last week’s announcement from Tri-State detailed closure of its Escalante coal plant in New Mexico and the Colowyo Mine in northwest Colorado by the end of 2020 and two units at the Craig Station will be retired by 2030. An additional unit at the Craig Station is already scheduled for 2025 retirement.

Tri-State has been under pressure from many of its 43 co-op members that span Colorado, Nebraska, Wyoming and New Mexico to transition away from coal power. Colorado has adopted a goal to reduce statewide greenhouse gases (GHGs) by 50 percent by 2030. According to financial analysts from the Energy and Policy Institute, we can expect decarbonization plans to benefit utility ratepayers and shareholders. “Replacing coal with renewable energy could save customers $8 billion each year.”

The recent announcements have been in the works for sometime according to Boughey, as Tri-State accelerated the pace of their plan as renewable technology investments have become cheaper than thermal energy. One of the directives from the Tri-State board is to implement a plan that will keep rates stable and could possibly lower rates to the consumer in the future.

Renewable energy prices in the last 5-10 years have dropped nearly 85% and they are at a point where you can can utilize the differential between renewable and thermal generation to help pay the cost of retiring some of these coal plants early, according to Boughey.

Tri State’s plans over the next 4 years outline 6-8 new renewable power projects throughout Colorado, Wyoming and New Mexico that will amount to a Gigawatt (1000 megawatts) of renewable energy to augment the thermal station closures. For conventional generators, such as a coal plant, a megawatt of capacity will produce electricity that equates to about the same amount of electricity consumed by 400 mountain homes in a year.

One of the components of Tri-State’s Responsible Energy Plan announcement is that it will increase member flexibility to develop more local, self-supplied renewable energy. Johnston said, “One of the exciting things for Mountain Parks Electric was the board’s adoption of Policy 119 that allows us to invest in a new 2 megawatt Community Solar project in Grand County.  The new project will improve our local renewable supply and will be cheaper than the power we buy from Tri-State.”

Mountain Parks Electric has recently completed two seperate 1 megawatt Community Solar projects, one in Grand County and one in Jackson County. The new 2 megawatt project is already in the design phase and, according to Johnston, should come online in late 2020. “We can build and produce power cheaper than we can buy power, so we are excited to push the new 2 megawatt project forward. I am very confident that we will bring our new Community Solar project online by the end of the year,” said Johnston.

The new project will most likely be in the Fraser area, and Johnston believes they will use the same contractor that was used for the Fraser project last fall. “We are moving down the road to acquire the land and/or lease option for the project and “once those details are finalized, we will detail our final construction plans and get started.”

“I think we are witnessing an evolution in energy production, distribution and consumption and I don’t think it will negatively impact Tri-States model.”  Johnston believes; if there is a way to

transition from thermal generation to renewables and maintain your rates, it just makes sense.

“I think that what you end up with at the end of the day is an evolution of Tri-State from a utility that got a lot of its power from thermal generation in the past and they are going to get a lot from renewables in the future,” said Johnston.

CEO Duane Highley, chief executive officer of Tri-State, said at a co-op industry event in October, and again in response to questions from reporters Wednesday at the State Capital: “Tri-State expects to be at 50% renewables by 2024 and higher yet by 2030. The low costs of renewable energy and operating cost reductions help to counterbalance the cost to retire our coal assets early.”

Speaker KC Becker (D-Boulder) issued the following statement reacting to the announcements from Tri-State outlining the retirement of all coal generation in Colorado and New Mexico: “I applaud Tri-State’s commitment to Colorado’s clean energy future and am impressed by the bold carbon emissions reduction target they set. Meeting our state’s targets requires immediate collective action, and I’m happy to see Tri-State take their roles seriously. As our state transitions toward a clean, renewable energy future, we must always keep in mind that this change will bring difficult transitions for Colorado’s energy workers, their families and the communities affected.

Tri -State has pledged 5 million dollars to invest in the area around Escalante, NM. The pledge identifies severance packages, retraining programs, new jobs and other local investments to assist  the local community through the transition period.

While it is too early to assess what this might mean for the rates we pay to Mountain Parks Electric, it is notable that Moody’s Investor Service estimated that the operating costs of the Colorado and New Mexico coal plants, Craig and Escalante, were approximately $33-$35 per megawatt-hour. By comparison, Tri-State can now acquire renewable energy for “well below” $20 per megawatt-hour.  In other words: these decisions are not entirely driven by recent legislation. They’re also economic.