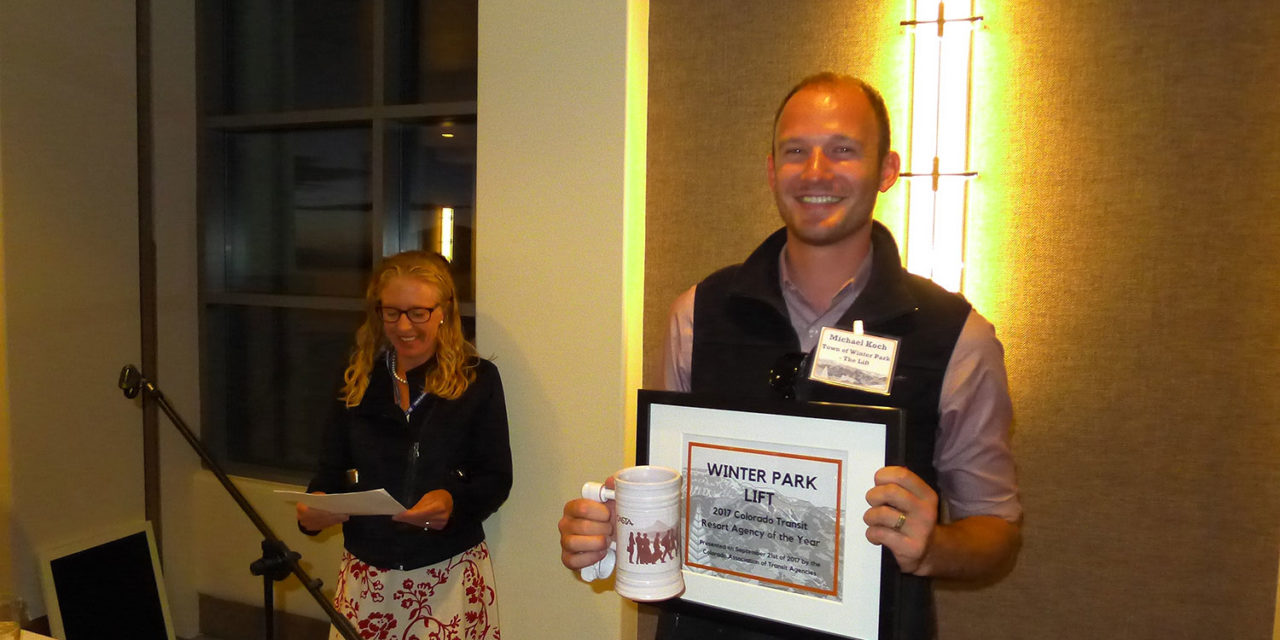 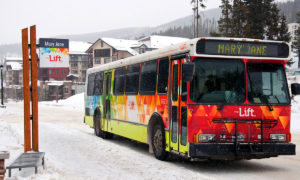 The Town of Winter Park has had recent reason to be proud of its developing transit system known as The Lift, celebrating its 1 millionth rider in August, some new capital acquisitions, and the honor of a statewide transit award following its first year of operation. But building up infrastructure comes with a price tag, and the Town is now telling partners and other stakeholders that, in order to sustain the current service into the future or continue growth, other revenues and commitments are needed.

The Lift was recently named the Colorado Transit Resort Agency of the Year by the Colorado Association of Transit Agencies. The award recognizes best practices implemented by a transit agency that serves communities higher than 6,600 feet in altitude and provides transit for tourist destinations.

The Lift was nominated by Jane Hickey of the Colorado Department of Transportation (CDOT) who says that the Lift “can serve as a model for the ‘how to’ create and expedite a successful transit operation.” It has received peer praise as well, such as from Jonathan Flint, Steamboat Springs Transit Manager and 2016 Transportation Professional of the Year,  who commended the system, “It is really amazing what they’ve been able to accomplish in such a short period of time. The Towns of Winter Park and Fraser and Michael Koch [Winter Park Transit Manager] are doing a great job.”

Drew Nelson, Winter Park Town Manager, agrees, “I’m proud of the decisions the Town Council has made. It took vision and courage and political partnership. They’ve done a fantastic job.” But he goes on to acknowledges that the system is “not running a sustainable budget and not doing necessary things for long-term health, such as building up a strategic reserve.”

In November 2015, residents of Winter Park and Fraser voted to implement respective 2 percent and 1 percent sales tax increases, for the express purpose of transit, trail, and capital improvements. The new revenue streams provided the means for the Town of Winter Park to assume a nearly $2 million contract with First Transit, who had previously run the shuttle service for Winter Park Resort.

The initial contract, Nelson explains, included leasing of buses from First Transit as well as costs related to personnel, human resources, etc. It did not include any capital costs or other “soft costs,” including administration, marketing, signage, etc, adding up to another $470,000 in annual costs. Since, the Town has worked to reduce costs through their own capital purchases and scheduling efficiencies. They bought 15 refurbished buses in 2016, and nine in 2017. They have received federal and state grants through CDOT that are funding the purchase of a new 16-passenger cutaway bus and two new $450,000 full-sized buses, to be delivered in February 2018.

These efforts have resulted in a $225,000 reduction in the contracted operating costs, a savings that Nelson says is passed directly back to the system and its users, “returning a tremendous value.” In all, the Town has dropped the per-hour contracted cost of the system from nearly $69/hour to $61.78/ hour– a significant savings for a system providing around 30,000 hours of free-to-rider transportation in the community each year.

The Town of Fraser has been a funding partner from the beginning, cooperating on a “good faith” basis, while no formalized agreement yet exists. Both towns have put the entirety of their new sales tax revenues into the system, pointing out that voters agreed to the tax with the provision that it would also fund trails and other capital projects. “Some people think it’s costlier than expected,” indicates Jeff Durbin, Fraser Town Manager. “It is more expensive than our police department.”

Winter Park Resort has committed $3 million, to be paid over a 10-year period directly into a capital reserve fund, in the hopes of helping to fund a future transit facility. In the meantime, the buses are stored in the outdoors, exposed to all of the elements; the current three-bay maintenance building cannot completely fit the largest of the buses nor provide the heaviest of repairs; and the estimated facility construction cost, in today’s dollars, is $10-13 million. Even with another $92,000 collected in 2017 through agreements with 16 serviced homeowners associations and Beaver Village, this leaves a system “operating on a deficit,” according to Nelson in a recent presentation to the Grand County Board of County Commissioners (BOCC). 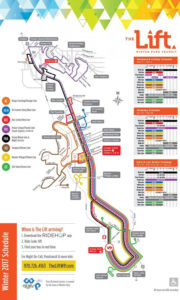 In presenting before the Board, Nelson stated that the Town of Winter Park was subsidizing routes that served areas outside of the town.

That subsidy, according to the Transit System’s calculation, would amount to about $21,000 in route service to Granby, and $250,000 in route service to unincorporated Grand County in the upcoming season. He provided a breakdown of five different routes plus the Paratransit services, all benefiting areas outside of the Winter Park and Fraser municipalities. He further explained the Town’s effort to break out costs associated with the different service areas, allocating cost by either the number of stops served on a route or by the time spent in a particular area.

One example given was what is known as the Yellow route, a winter-only route providing service between Winter Park Resort and unincorporated Beaver Village Condominiums. In the 2016-17 season, it provided 1,070 hours of service, transporting 24,708 riders at a cost of $66,091.95 (using the same $61.78/hour formula). With stops only at the resort and Beaver Village, the Town of Winter Park is claiming a 50-percent cost allocation to the Town and a 50-percent cost allocation to Grand County.

Similarly, the Granby route, operated 1,530 hours over 2016-17, and transported 24,735 riders with a price-tag of $94,496.52. Using the number of stops as the allocating factor, Winter Park has determined that 37 percent of the cost should be apportioned to Winter Park for 10 stops, 14.8 percent to Fraser for four stops, 22.2 percent to Granby for six stops, and 26 percent to Grand County for seven stops in unincorporated areas.

The Town of Fraser, for one, seems to have agreed that this allocation is fair. While the municipalities are still in negotiation over an inter-governmental agreement that both desire, a proposed draft from Fraser offers to pay “for its attributable share of the Transit System services, based on the route cost appropriations as defined; a monthly management fee equal to 5 percent of the Fraser portion of administrative costs in operating the System; and an [as yet undetermined] one-time contribution in consideration of start-up costs already incurred by Winter Park for transit consulting services and the RideHop app.”

The Town of Granby is in discussion with Winter Park and the Transit System, but has not yet contributed any funding. Granby Town Manager Aaron Blair reports that Granby’s Town Council has not had that discussion in regard to the upcoming season. “I think it’s a great system and they’re doing a great job. I would really like to see more rider data. Is it only Resort employees using the system? Is it other citizens? Specific rider data would be helpful in making wise and sound decisions, both for Granby and for Winter Park.”

The BOCC has donated $24,000 since the system’s start-up in November 2015, with a $14,000 contribution in 2016 and $10,000 in 2017. In the recent Transit Workshop before the Board, Commissioner Kris Manguso asked whether expansion would increase federal monies to the system. At present, only the Black Line, from Safeway to Winter Park Resort, is considered for federal funding, as it is the only year-round “back-bone” route. Winter Park Mayor Jimmy Lahrman responded by saying that “We view the $150,000 federal subsidy as a bonus to the system’s budget. As there are more and more rural transit systems looking for a piece of the pie, we can’t count on it as a viable revenue stream in the future and are planning on it to be decreased or eliminated. Winter Park is trying to limit its subsidies across the board. We’d like [Grand County] to be the next partner in the system.”

At the time of writing, the BOCC was still holding budget hearings in preparation for its 2018 budget. The County Manager’s Office indicated that they would refrain from answering questions for this article, until those hearings were done. But Commissioner Rich Cimino, who had invited Winter Park to present to the Board, said that he is interested in the County continuing to support the Lift. “However,” he said, “it is my understanding that the routes serving unincorporated Grand County are historic routes and it was in the financial interest of the system to operate those routes, so the idea of it being subsidized isn’t quite accurate. Transit is a complex issue, and the Board is working in a cooperative and collaborative manner to look at it and evaluate it.”

For the upcoming season, regardless of outside stakeholder commitment, the Town of Winter Park is dedicated to maintaining the same routes as last winter. “It is the smartest thing to do,” Nelson said, indicating the desire to continue gathering comparable data, including growth trends, cost trends and gained efficiencies.

The Red Route will be the only route to see changes as the system “restores service to a place that had service before.” The line will return to Sawmill Station behind Hideaway Park and add three stops in Rendezvous, before passing by the Fraser Valley Rec Center and on to the Winter Park Resort.

A request to similarly shift the Black Route through Grand Park was not met this year. “The last minute request for change to a shared route came too late to the operating season,” Nelson explained. “We’ve learned that changes without proper planning cause tremendous disruption. They do not contribute to ensuring stability and self-sustainability in the system.” He indicated that all timely requests would be considered if the future if the data were supportive, but stressed the message that “any expansion must come with new revenues.”

For more about the Winter Park Transit system, including route and scheduling information, go to TheLiftWP.com. To track your bus, download the RideHop app on iPhone or Android, and enter the ride code: lift. To request a pick up at a Call-n-Ride stop or for ADA Paratransit, call 970-726-4163.