Town of Fraser Picks Up Pace on Projects 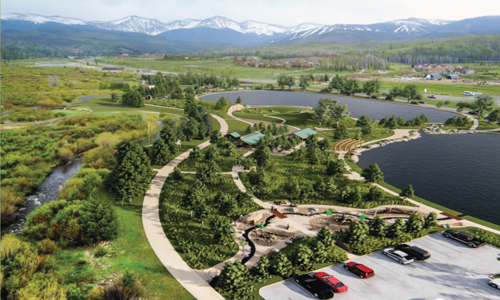 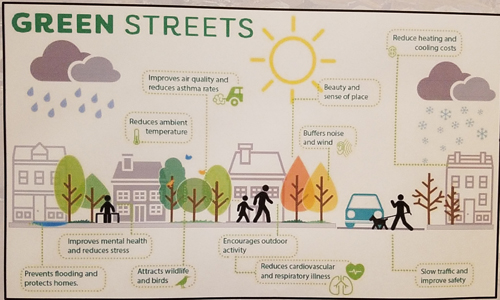 Outline of Green Streets – courtesy of the Town of Fraser

There’s a lot going on in the Town of Fraser, and it is looking like the summer is going to filled with a number of projects that are moving ahead.

On Wednesday, March 7th, the Town of Fraser hosted an open house for the US Highway 40 Pedestrian Safety Improvement Project. Interested members of the community viewed a series of informational posters describing the project and gave feedback on preferences for the medians to be installed on Highway 40. Bowman Consulting presented the designs, which were exhibited at about 30% completion. The Town and Bowman will utilize feedback received at the open house and working to reach 90% plan completion by the end of March to meet an aggressive timeline of beginning work on the project by August 2018.

The Project objectives include implementing traffic calming measures to promote lower vehicle travel speeds and highway safety. The Town will install medians and curb bump outs for shorter/safer crossings and provide pedestrian refuge within the medians. It will also include landscaped features within the corridor to promote a vibrant environment, following a Green Street initiative approach. ADA ramps meeting current codes and specifications will be installed along with improved signage for pedestrian safety.

Kim Hannah, owner of the Fraser Quick Stop, pointed out that placement of a median in front of her business on Highway 40 would prevent her customers from being able to turn north/west onto Highway 40. She asked the Town to reconsider placement of the median, due to the hardship it presents if placed in the currently proposed location.

At the March 7 Board of Trustees Meeting, Brandon Parsons with THK Associates presented an updated draft Master Plan for CozensRanch Open Space. He thanked the Trustees, the Town’s Public Arts Committee, the Planning Commission, Town staff and stakeholders for working closely with THK on the project design. Parsons stated that the draft reflected the Town’s vision and goals for the project.

Starting  in Fall 2017, the Town held several open houses on the Fraser River Corridor project, seeking input from the community on what they felt was most important to include in the 120-acre open space area. The study and Master Plan was funded by a $65,000 Great Outdoors Colorado (GOCO) Planning Grant.

Recreational recommendations include improvement of existing amenities along the Fraser River Trail, creating gateways and increased parking at key locations, partnering with the Headwaters Center and the Town of Winter Park on updating educational signage, construction of a new pedestrian bridge, an expanded “pedestrian friendly” trail system, and activating a year-round riverside park. The Lion’s Pond Area will include a riverside park with passive activities close by.

Trail connectivity was an important area of focus. Comments received stated the current trails have conflicts, with cyclists (going too fast) and unleashed dogs and the plans seek to resolve these issues. The project’s western trail will be pedestrian friendly, but would not be designed to be cyclist free. Possible installation of traffic calming devices such as ballards that require dismount was discussed.

Based on feedback received, the Plan also recommended construction of a small, skills-related “bike playground” and an earthen amphitheater, which were both popular suggestions. The plan also recommends installation of pet waste and recycling stations in the corridor. A Dog Park was a popular suggestion, but it would not be good for river health to place one so close to the Fraser River. THK supported creation of a Dog Park, but recommended it not be placed within the Fraser River Corridor development.

The Plan was presented with six projects outlined:

It is estimated to cost about $7 million to complete all projects as rendered. The project would be done in increments, starting with a Pilot Project, constructing ADA compliant access, planting trees and landscaping, and, building momentum for the project.

Parsons advised the Trustees that there are multiple grants and leveraging grants available through agencies such as GOCO and CPW which will help fund the projects. THK also provided a list of available grants with timelines to assist the Town in seeking funding. 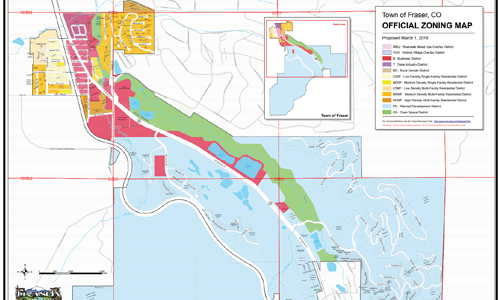 Fraser’s Revised Zoning Map – courtesy of the Town of Fraser

At the February 28th combined Board of Trustees and Planning Commission meeting, consultants Martin Landers and Gerald Dahl of Plan Tools LLC presented a draft of the Town’s revised Municipal Code, concerning land use and a revised Town Zoning Map. The process began In September 2017, when the Town and consultants from Plan Tools held interviews with members of the community and current code users, following up with an Open House in November, to determine the needs of the community as they pertain to land use and zoning. Plan Tools next performed a Town Code diagnosis which was completed in December and presented to the Town in January.

As a result, they created new regulations that are easier to understand and reference, reducing regulatory barriers to development. They also created 2 new zoning districts (Riverwalk Mixed Use and Victorian Village Overlay Districts), consistent with Fraser’s downtown strategic plan of creating a unique, walkable neighborhood.

During the meeting, members of the Planning Commission, Trustees and Town staff worked through items such as current non-conforming lots, lots identified as multi-family zoned within single family zoned areas, lot accessibility, conditional vs. permitted clauses and myriad building regulations. In the end, Plan Tools took the feedback and promised a new draft by mid-March. 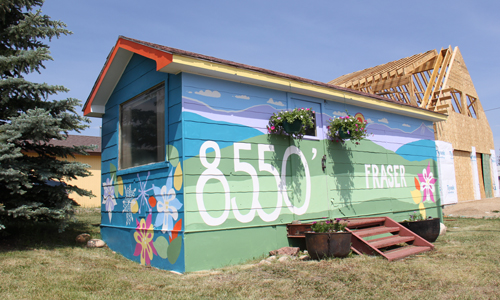 The Fraser Mural Program is back for 2018 and better than ever. An important distinction of the 2018 program is that all buildings in Fraser are now eligible, not just businesses. The updated application will be finalized by early April. The program was initiated by Fraser’s Public Arts Committee (PAC) last summer. The PAC works with building owners in Fraser to come up with a mural depictions of the Fraser Valley to paint on a wall of a building, garage, shed, etc. If you have any questions about the mural program, contact Business Development Specialist, Allie Heon, via email: aheon@town.fraser.co.us, or, at (970) 726-5491 ext. 218.

The Town of Fraser has been awarded a grant from the Colorado Energy Office for the installation of electric vehicle supply equipment (EVSE). Enhancing the electric vehicle (EV) charging infrastructure is a priority for the state of Colorado and is facilitating this effort through this grant funding through a program called “Charge Ahead Colorado.”

The goal of Charge Ahead Colorado is to foster economic development and boost tourism across the state, while reducing air pollution. Installation of an electric vehicle charging station in Fraser will provide an excellent economic benefit and encourage the use of EVs and help in reducing greenhouse gases in the Fraser Valley.

Following the emergency waterline repair along Doc Susie Ave on February 23rd, the excavation work for this replacement project began on Tuesday, March 6th. ATH Specialties was contracted for the work on a time and materials basis as they had a crew and equipment already established and ready to hit-the-ground-running.

Temporary water services were connected to the six Divide condo buildings by the end of the day on Wednesday, March 7th, utilizing local plumbing contractors, at which time the main was shut down and drained.

To date, over 200 linear feet of C-900 PVC pipe and fittings has been installed along with a new fire hydrant assembly and three new isolation valves. The cost for the emergency replacement is right around $100,000. As pipe was replaced north of the break, each old length of pipe was found in the same deteriorated condition, therefore also requiring replacement.

The next phase of the work will replace the pipe section to the south of 92 Doc Susie Ave into the intersection of Elk Creek and Doc Susie. It is anticipated this work will take approximately two days. Asphalt replacement in roadways and driveways will occur once the asphalt plants open for the summer.

For the curious, you can have a look at the two pipe sections in the display case at Fraser Town Hall for a comparison of what a new steel water pipe looks like compared to 40 year old water pipe.