The Great Controversy over Art 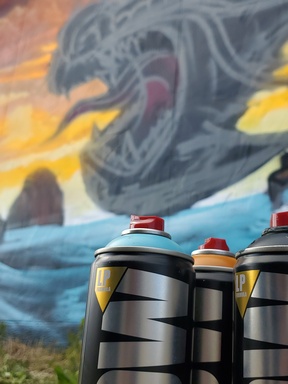 Throughout history, from the first cave paintings, pictographs and petroglyphs, art has stirred human emotion. Regardless of background or education, no two people will interpret a piece of art in the same way. Luckily for us, opinion has never stopped an artist from creating. 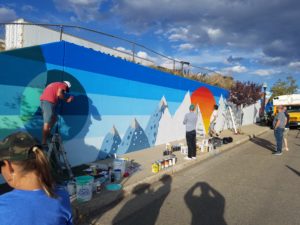 Last summer’s successful collaboration between the town of Granby, Granby Chamber and So-Gnar Creative led to the completion of the colorful mural that runs along highway 40 on the retaining wall between Zero and Mesa Streets. Before artist Pat Milbery and his So-Gnar crew left Grand County, they also painted the whimsical moose antlers on the side of the Granby Garage building, which faces 5th St.

It wasn’t long before the town took note of the uptick in visitors, who might have otherwise passed through town, stopping to capture photos of and with the murals. To keep that momentum, Granby Chamber director, Jessica Blair, and artist Pat Milbery of So-Gnar Creative discussed ways to add more colorful additions to the town’s streetscape and the street art festival, RKY MTN WALLS, was born.

Blair reached out to business owners in the town’s downtown business district, securing eight exterior wall spaces, visible from US 40, that would serve as the ‘canvases’ for the colorful street art. Milbery had no trouble finding mural artists interested in coming to the Colorado high country to share their creativity and the dates of the festival were set. Over the winter, the team, through Granby’s “Colorado Main Street” designation and initiative, worked on sponsorship and funding for the event. 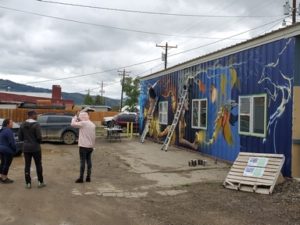 Last week, the first RKY MTN WALLS street art festival came to life in downtown Granby. Volunteers had primed the eight building walls in preparation for the event and sixteen renowned mural artists began creating on June 19th. Through rain, snow and hail, the artists braved the conditions to bring their works to life.

Even before the paint was dry and the weather had cleared, residents and visitors had taken notice of the works that now adorned the downtown business district. As is the case with most artwork, reviews were mixed.

Some took to social media, voicing concerns over whether the artwork represented the town. Rumors of whitewashing the artwork stirred and, by Tuesday afternoon, two Denver news channels had paid a visit to Granby to report on the perceived controversy. 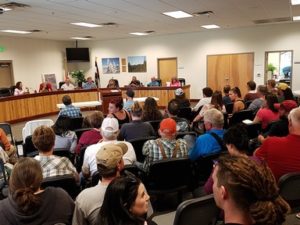 Over 70 members of the community attended the Granby Board of Trustees meeting Tuesday night to voice their opinions of the murals, during the unscheduled public comment period.

First to the podium was Gambles business owner, Casey Farrell. Farrell’s building had been destroyed during the June 4, 2004 Heemeyer Bulldozer rampage. He told the trustees that he rebuilt to align with the western style motif the town had embraced at the time. Since then, he’d seen the town’s direction change to “Adventure Awaits” and he questioned whether some of the murals fit into a recreational town such as Granby.

Tyler Henderson followed, saying, “I appreciate art for art’s sake. I think it’s something cool and different.” He added, “Everything doesn’t always have to be on brand.”

Grand County Board of Realtors’ CEO, Deb Brynoff, said, “Art will also speak to many of the diverse people that visit us. I am proud to see Granby pushing the envelope.”

Lucinda Carpenter told the trustees of her summer adventure travels made through Colorado with her daughter. “I’ve been through a ton of towns and don’t look at them,” said Carpenter. “Now, we’ve got this kind of spark of individuality,” she said, adding, “Our brand is changing a lot. We are a lot more than cowboy hats and mountains.”

Rose Moeller-Jahn, owner of Spirits n’ Things, said, “I do love them. I think the artists worked very hard.” She added, “In the last 6 days, more people have stopped, taken pictures and they are from all over! This is going to bring a lot of positivity.”

Liz McIntyre told the trustees, “I wanted to come and thank you for your courage to undertake the mural project.” She went on to say, “Art is meant to be provocative. It opens up discussion and it peaks our curiosity about the artist’s visions. The mural artists have a wide variety of style, and, like ice cream, everyone will have their own taste.” 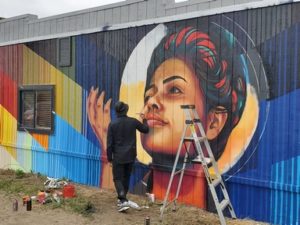 Peter Kowalczyk made the drive from Aurora to speak to the trustees. “I love murals”, he said. “I have more than 800 photos of murals.” He described the benefits communities have realized from murals, benefiting both business and the artist. “I was so excited that I spent the weekend here. These guys do work I consider art, fine art in many cases.” He asked, “What would we say 400 years ago if Michaelangelo had completed the Sistine Chapel and they said ‘paint over it’?” Kowalczyk added, “I support the artists and the effort.”

Artist Dawn Murphy, who had completed the murals at R&J Liquors and the Crooked Creek Saloon in Fraser, said she would have liked for the town to incorporate some of the local artists in the group.

Pat Milbery also addressed the board. A co-founder of RKY MTN WALLS, he thanked the town for initially reaching out to commission the wall last year. Milbery told them he had painted in Paso Robles, CA, Tokyo, Brazil, Barcelona, Minneapolis and Austin, TX. “I am lucky and grateful to share my gift and talent with others.” He talked about the responsibility of articulating the town and county on the mural they completed last summer. “We felt seeing people work together, having art as a common medium, we did our best. After that experience, what felt so good was the acceptance.” He told them RKY MTN WALLS built on the acceptance that resonated with the first mural. “Not everything you paint everyone loves.” He explained that each mural told a story. “As creators, I want to say thank you to the town, the people of Grand County and those that worked so hard. It uplifts energy, changing the way people communicate and share their memories. I feel honored. Thank you for allowing this to happen.”

As more residents took the podium, they spoke with understanding and support of the creativity and imagination of the project. They recognized the murals would draw attention from passersby and could be the reason for why they stop. Some felt left out of the process and urged for more effective communication. 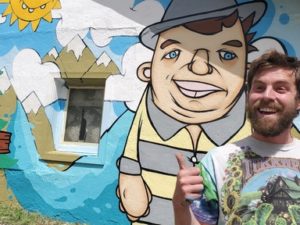 It also became clear that only the private business owners where the murals were located would have a say in ‘whitewashing’. No owners came forward with that intent during the meeting.

At the end of the public comment, Mayor Paul Chavoustie told the attendees, “I want to hear from you. My phone number and email is on the town website.”

The trustees also agreed to add the topic to a future agenda for discussion.

It is said that ‘beauty is in the eye of the beholder’. Good, bad or indifferent, the RKY MTN WALLS street art festival has created a buzz, furthering activation of downtown Granby, which was a primary goal of the project.

Granby’s art movement is still in its infancy. The community appears to support future initiatives, and, on Tuesday night, they made it clear they wish to become more involved with the process.