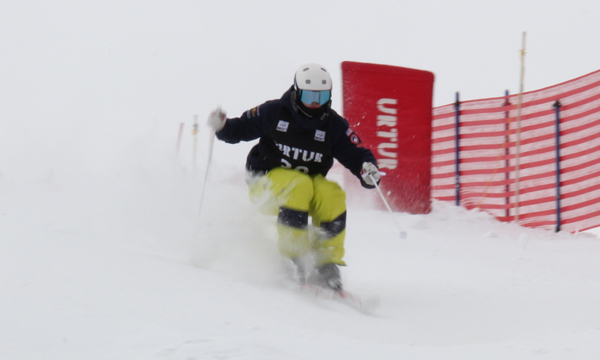 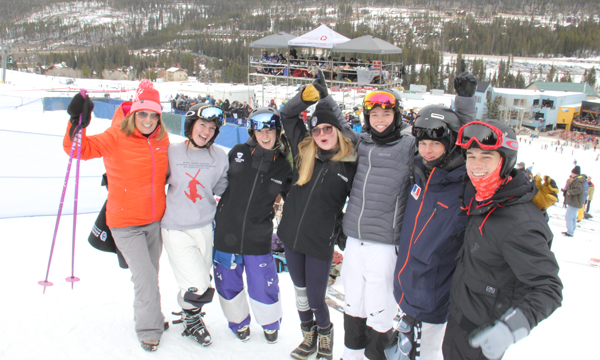 The Club has always had a core of dedicated coaches, volunteers and support staff. Many have been with the program for decades in one form or another.  One of the most notable figures in the Competition Program is Laurie Mooney, Freestyle and Freeskiing program director. Mooney has a passion for skiing that started as a young girl near Winchester Massachusetts where she grew up skiing on a golf course. “In the winter a local golf course would setup makeshift rope tows and we would bomb down the hill basically out of control”  Mooney fell in love with free skiing and as a young woman decided to pursue her passion and love of the outdoors. She took up residence and skied out of Killington and the Mt Snow Ski Academy and “started competing professionally to make a few bucks here and there”.  In 1975 she entered the very first US National Championship and won her division.  In those days, freestyle skiing wasn’t an Olympic Sport.  Ariels were still a  exhibition.  “Freestyle competitions were a combination event of Moguls, Ariels and ballet. Yep Ballet on Skis”

Over the years Winter Park has fostered some amazing athletes, Melanie Palenik, Liz McIntyre,Trace Worthington, Toby Dawson, Ryan St Onge and a long list of up and coming athletes that have the fire and ability to take it to the next level.

According to Mooney, “The philosophy of the Winter Park Competition Center is to offer the opportunity to achieve one’s’ highest potential as an athlete, person, and competitor.”  The core philosophy has been instilled in generations of athletes.  “We consider the athlete first, winning second, we want to help develop the total athlete.”

Winter Park is the place to train, boasting a full-length, FIS specification mogul course right at the base December – April, 2 permanent aerial sites, and 3 additional mogul courses on the mountain.
The WPCC Fulltime Academy is an intensive year-round training program for the freestyle competitor with a total commitment toward reaching their highest goals in competitive freestyle skiing. Skiers train six days a week during the ski season. During the off-season, athletes participate in several summer camps and developmental programs while following a physical training regimen designed to prepare them for success during the ski season. A highly experienced coaching staff teaches the most current techniques of mogul skiing and aerials using the latest in video technology to help the athletes improve. Off-snow sessions include indoor trampoline sessions, water ramping sessions, physical conditioning, and mental skills training led by our Sports Performance specialist and Sports Psychologist Director, Stephanie Zavilla. 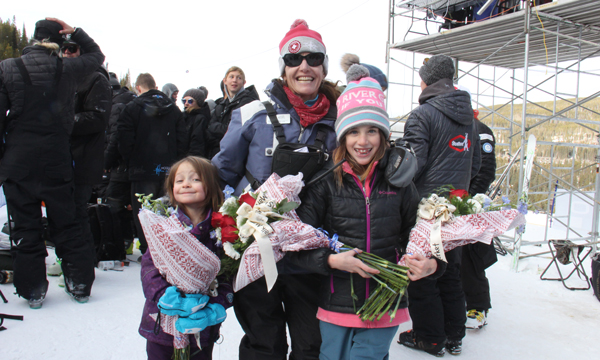 The Winter Park Competition Center averages 45-50 full time Academy Athletes in a wide variety of disciplines. The club has over 150 coaches and approximately 800 members of all ages and abilities.  The coaches, volunteers and support staff are the frontline team that contributes to the Competition Center but the entire resort plays a role in the success of the program.

I went out to catch some of the action at the this year’s US Freestyle Selections Mogul meet. The best up-and-coming freestyle mogul skiers in the United States, as well as athletes from five other countries, were at Winter Park Resort from December 18 to December 21 to compete in the 24th annual event. This marked the only moguls freestyle selection event held in the U.S. this year.
The event was 5 days of training, qualifiers and competition on the Ambush Mogul course at the base of Winter Park Resort, the only FIS sanctioned course in the U.S. at the time of the event.  The event is used to qualify skiers to start in NorAm competitions and possible starts in U.S. World Cups.  It is an invitation level event and competitors from around the world compete ih moguls and dual mogul events

Tonia Shaw, Race and Event Manager for the Resort said, “It was amazing to see the course come together”  The commitment by the snowmakers, slope maintenance and our race crew to get this course ready and approved for competition ”was truly fantastic work”.  It has been a challenging year, “we have not had much help from Mother Nature”

The comp center was recognized in the 1960’s but competitive skiing on the mountain dates back to the 1930s and the early competitions and races were held on what is known as Mary Jane Trail today.  This was nearly 40 years before lift service at the Mary Jane and 10 years before the Winter Park Mountain opened for business.  A race in those days consisted of hiking to the top of the mountain, having lunch then racing to the bottom.  Occasionally, for a cup or medal but mostly for bragging rights.

Today, the world of competition is performing at the highest level and a competitor wins or loses by fractions of a point. The field is large and the margin for error is slim.  I spent a couple of minutes talking to US Ski Team Member Casey Andringa who said, “the course is consistent and fairly fine tuned” considering it was a rock pile a couple of weeks ago. Casey added, “I felt pretty confident in my first run. It makes the second run much more relaxed and fluid.”  IN his final run Casey pulled a cork 10 mute off the top jump and a cork 7 on the bottom to take the top tier on the podium Monday with a score of 87.38.  Andringa has been working on a trick we may see in the future; a double cork 1440.  That is 2 flips with 4 complete twists to help you put it in perspective.

For more information on the U.S. freestyle selections or on Winter Parks Competition Center, considered one of the best skiing and riding programs in the country, please visit: www.winterparkresort.com/competitioncenter