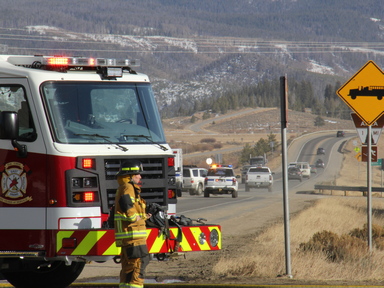 Last Friday afternoon, a fire broke out on the second floor of Rick Kramer’s iconic log structure, located in the center of Tabernash. In a matter of minutes, the flames spread up and out, destroying not only the tower, but the adjacent mobile home as well, as the devastated homeowner watched helplessly. 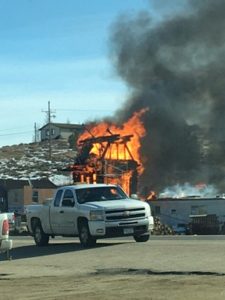 A retired firefighter, Kramer was able to pull his dog, Sunny, to safety and get his truck, ATV and motorcycle moved away from the flames before the fire trucks arrived. By the time the fire was contained, both structures were left uninhabitable and he’d lost just about everything. The log structure was his TV room, lounge area and bath house. Kramer had recently put a new tub in the log cabin. The mobile home was his main residence. “It is unfortunate because I had a bunch of tools in and around the log structure that are a total loss as well,” said Kramer.

Rick Kramer moved to the Fraser Valley in 1981, where he first worked at the ski area. Over the next 38 years, Kramer grew roots in our community selling firewood and making things out of logs. He joined the Volunteer Fire Department in 1985 and currently serves as a board member for East Grand Fire Protection District #4.

Kramer plans to bring what is left of the cabin down, clear his lot and start to rebuild as soon as possible, but without homeowners’ insurance coverage, he faces tremendous out-of-pocket costs. “I have some plans drawn up for a log house and am lucky timber is still readily available throughout the valley,” said Kramer. “It will take awhile, but I am going to rebuild.” 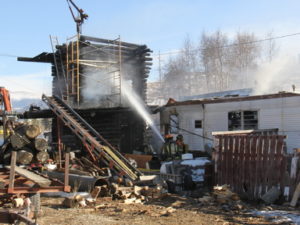 Always one to help others, whether putting someone up while they got back on their feet or plowing a neighbor’s driveway so they could get home, Kramer’s always said, “the world would be a better place if we all helped each other out.”

To help the man who has helped so many, a GoFundMe page has been set up on his behalf. Donations can also be dropped off at East Grand Fire Protection District #4 in Fraser.