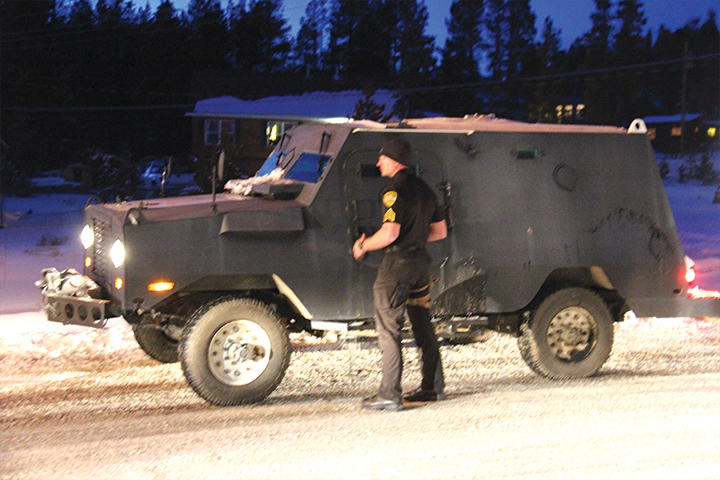 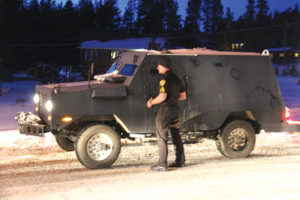 At 16:11 this afternoon, a concerned citizen notified Grand County Sheriff Dispatch of a suspicious person parked in a vehicle near the intersection of County Roads 85/87 west of Tabernash, with guns on the top of his car.  The concerned citizen also indicated that the suspect was not a known resident of the area, and was driving through the neighborhood suspiciously while hiding his face when seen earlier in the day. Due to the location of the vehicle; a mere 30 yards from the highway and school traffic increasing, local law enforcement agencies and first responders began to mobilize to ensure that the safety of the public was not put in jeopardy. The Grand County Sheriff’s Office, Fraser Winter Park Police, Granby Police, Grand County ERT team, Colorado State Patrol, Office of Emergency Management and Grand County EMS were all involved to contain the individual and keep the public safe should the suspect decide to flee.

Highway 40 at County Road 53 near the YMCA Snow Mountain Ranch, and County Road 5, just west of Tabernash were closed to insure that no vehicles were passing through the active scene. The highway was closed during the duration of the incident and was immediately opened upon the suspect’s apprehension.

The suspect was taken into custody at 17:35 without incident and the Grand County Sheriff’s Office is conducting an ongoing investigation. “This event further demonstrates the ongoing partnership between law enforcement and the Grand County community.  I greatly appreciate our local residents being vigilant and alerting us to this situation,” Grand County Sheriff Brett Schroetlin said. “The situation was diffused and the safety of the public was maintained at the highest level thanks to our law enforcement officers.

Shortly after 4 pm this afternoon, Grand County SWAT, Sheriff’s Department, Granby and Winter Park/Fraser Police responded to a report of an individual with weapon(s) in the Alta Vista Trailer Park, located on Highway 40 in Tabernash. The individual has been taken into custody, and, no other persons of interest are currently under investigation. It is unclear whether this was a domestic or isolated incident. Both directions of Highway 40 were closed for a period during the active search for the individual, which included deployment of drone technology. The highway was reopened at 5:40 pm, but those living in the area have been instructed to remain on alert. 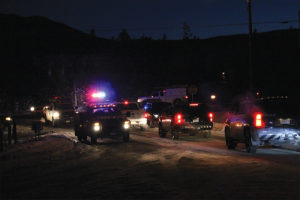 This is a developing story and we will provide updates as they are obtained.