Students across U.S. protest ‘inaction’ on guns with school walkout 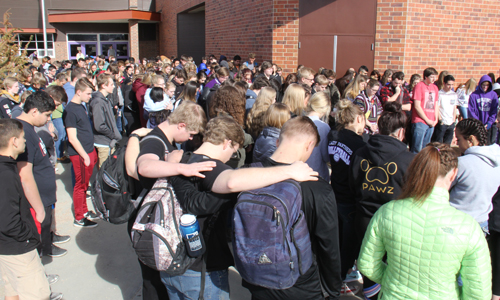 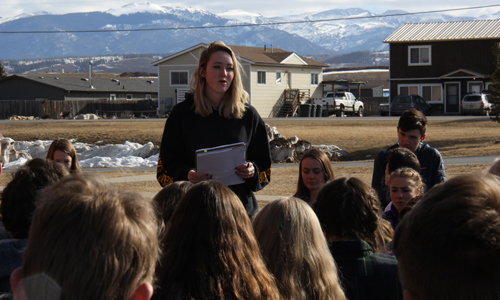 Dressed primarily in black, the students solemnly spilled out onto the courtyard at Middle Park High School in Granby, holding hands and whispering thoughts and feelings. It was not the everyday laughter and jovial ribbing of a normal High School crowd. “We March for our lives and the lives of others” said Genevieve “Gigi” Newcomer-Neeson, organizer of the MPHS event.

Several parents, teachers and staff gathered around the picnic tables at the front of the school as Gigi began to speak about the horrific events that have happened accross the country. She read the names of the Parkland kids and their ages. She spoke of the coaches that lost their lives barring doors, trying to save kids. She spoke for almost 10 minutes, calling the names to a silent crowd.  In the end, breaking down into tears, like the weight of the moment had been lifted.

Exactly one month after 17 people were killed at Marjory Stoneman Douglas High School in Parkland, FL, survivors of the massacre joined tens of thousands of students across the US by walking out of school on Wednesday morning.  Much of the thoughts and sentiments were about an understanding only shared by the kids of today, kids that are targeted in schools around the country. Our kids.

Gigi, Abigail Turner and Kaitlyn McConnell organized the event, with assistance from the MPHS Student Council. “We wanted to do this movement of solidarity because its important that students show that we are through with watching young people across the country get slaughtered every day. We are standing together to show that we are more than a number and we are stronger than fear – bigger than fear,” resounded Newcomer-Neeson.

The mass protests and gatherings were held at 10 am, local time in each time zone and lasted 17 minutes, one for each of the Parkland victims. Organizers said the purpose was to highlight “Congress’ inaction against the gun violence plaguing our schools and neighborhoods.”  In our local school, the message was of remembrerence and a call to action. “We have to stop this violence.”

An estimated 185,000 people in 50 states were expected to join the walkout, with around 3,100 schools planning to participate, an organizer with the Women’s March told NBC News. 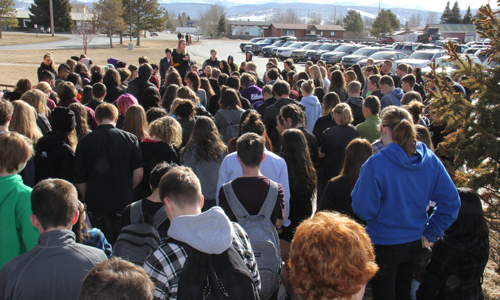 The marches ranged in size accross the country and stood in silence, many wearing orange — the color representing support for gun control.

“No matter what you decide the action to be, we just want action,” Newcomer-Neeson said. “We’re tired of thoughts and prayers, and we’re ready to finally do something.” She went on to say “This isnt a protest because political lines cannot divide students right now. It is important that students stand together and avoid political conflict because this is more than politics. This is about student’s LIVES.”

“It was good to see our kids come together in this setting. To see them engaged and passionate, it was an incredible feeling,” said Bridget Christenson, one of the parents attending the event.

At Columbine High School in Littleton, Colorado, the walkout lasted 30 minutes — 17 minutes for the Parkland victims, and 13 for each victim of the massacre at the high school in 1999. During the half-hour of silence, students released red, white or blue balloons, one at a time, in memory of those killed.

In Washington, a crowd in the thousands gathered, holding signs toward the White House reading “Books Not Bullets” and “Fire Politicians, Not Guns”.

Steve Skinner, of KFFR Radio 88.3, recalled a student in Florida recently addressing a local Representative, saying “”The NRA has held Congress hostage for many years. We are going to outlive you and make the appropriate changes.” Skinner went on to say “I support young people standing up to the NRA in peaceful protests to protect their future.”

“I think the most important aspect is that kids/admin/teachers are taking a stand for something larger than them. It’s not a gesture, it’s heartfelt and real and it means something. It’s our reactions to pain and loss that determine our destiny and who we are!! Taking a stand in their own way is beautiful. I am both proud of our students for standing up and honored to be part of a staff that listens to our kids and encourages them to have a voice, take a stand and show solidarity. Love is always the answer.” said parent, Sudi Newcomer.

Middle Park High School students are compliing a list of legislators to take part in the activism piece.  The students will write letters, learning the mechanics of democracy.

Frank Reeves, Superintendent of East Grand Schools said, “I feel this is a learning process for our kids. It is important for them to learn right from wrong and not be afraid to speak out to create positive change in the community and beyond.” We can talk gun control, mental health and arming teachers, but basic principles of befriending people, being kind to people and trying to help them out goes further than empty rhetoric.

“By the time we think arming teachers is the right approach, we have lost sight of the human experience” said Reeves. “I believe we need to get back to the fundamentals of decency and kindness.” We need to develop and nurture social skills, to reach out when someone is alone or isolated, and sit with a kid that is an outsider and ask the outsider to join in. We need to let kids know it is okay to be different and actually celebrate our differences, not judge them. “These are core beliefs that need to be part of everyday life,” emphasized Reeves.