Spring runoff: All that water has to go somewhere 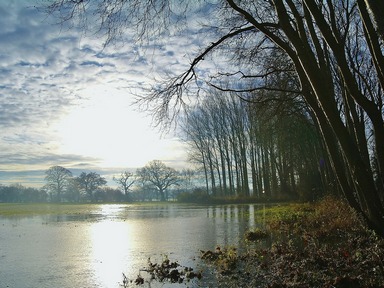 As we head into the warmer months here in Colorado, flooding from rapid snowmelt, thunderstorms and overflowing rivers becomes a very real concern. As we saw with Colorado’s historic “bomb cyclone,” the state’s weather can go from high winds, freezing temperatures and drifting snow to rushing water — all in a single day.

Floods can happen anywhere, anytime. They often accompany natural disasters such as storms, early or rapid snowmelts or rising rivers, but not always. About 25 percent of all flood insurance claims come from outside of high-risk areas. 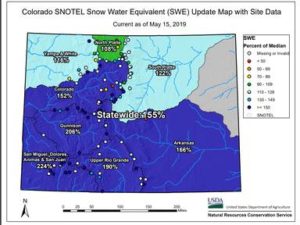 Automated snowpack monitoring stations called SNOw TELemetry (SNOTEL) sites scattered across the mountains of the Western United States and specifically in Colorado are indicating various stages of snowmelt in the lower and mid-elevations. As is typically the case, most sites at higher elevations are not yet experiencing pronounced melt. “At all elevation bands snowmelt continues to develop normally across Colorado,” comments Brian Domonkos, Colorado Snow Survey Supervisor. Domonkos continues, “this is a good start to spring snowmelt in a year that saw above normal annual snowpack peaks, particularly in southern Colorado.” Between late March and early April, the Upper Rio Grande, Gunnison, Arkansas and combined Southwest river basins posted some of the highest snowpack annual peaks, each of which rank in the top five since records began in the 1980’s.

So far, water year 2019 has been an incredible change from 2018, especially across southern Colorado. The flip side to having such a plentiful water supply is the increased flood risk resulting from higher river flows. Now is a very dynamic time of year during which weather and streamflows can change quickly, so conditions are worth watching closely for a variety of reasons.

At this point in the water year, the rate of snowmelt becomes more important. Accelerated melt of the above normal snowpack could lead to a greater potential for runoff to overwhelm the state’s streams and overtop their banks, while moderate snowmelt will be more likely to provide a consistent water supply later into the summer.

After the plentiful precipitation experienced during March, sunshine and dry skies prevailed over Colorado’s mountains during much of April. In most of the state’s major river basins, the bulk of last month’s moisture fell during the last four days of the month. Despite the drier conditions experienced during April, Colorado’s river basins all continue to have above normal water year-to-date precipitation.

With runoff season upon us, volumetric forecasts remain above normal for most of the Colorado’s major streams. During April, many western slope tributaries already experienced higher than normal streamflow volumes for the month. With an above normal snowpack still present in all the major river basins, this trend is expected to continue in the coming months.

Recreation on the rivers

Spring rafting and fishing trips can be very rewarding and fun. But early season boating can also mean frigid (remember where that water came from!), fast moving, high water and challenging conditions. It is imperative to practice safe boating skills. 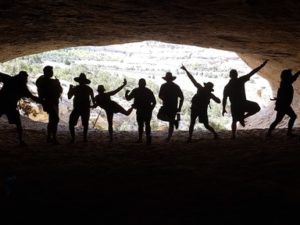 There are always risks associated with whitewater, even when rivers are running well within their expected limit. It is important that everyone on the water is properly equipped to self-rescue and prepared to rescue others.

A personal floatation device (PFD), helmet and throw bag are the bare minimum necessities for most whitewater scenarios. Most days on the rivers this time of year, you will also need splash gear at a minimum or a dry suit, because of the water and air temperatures. Extra layers and proper outerwear are critical in preventing hypothermia. Pack a dry bag with extra layers of dry gear to be prepared for every type of weather.

Decisions you make prior to put-in are going to be most important during spring flows. Flooding will undoubtedly move trees, brush and other debris down the river. These hazards are especially dangerous when they are in motion, but also result in changes in the river as they settle in, such as strainers. Be aware and make smart choices about getting on the river if there are logs coming down the size of your kayak or raft. Keep in contact with the whitewater community so that you are informed of major river changes that others may have discovered.

Once on the river, the most important addition to your whitewater trips will be additional boats for safety. Injuries are possible, regardless of water level. You should run all of your river trips so that there are multiple boats and experienced paddlers in your group. The more boats and trained people on the water, the more resources available in the event of a river accident.

Keep your family and pets safe

Anyone who slips into a river flowing quickly, without a PFD, is at serious risk. Take extra precautions by the riverside and recognize “no fall zones.” For pets and children, constant monitoring near the riverside is a must.

This is not just true of larger rivers during spring flows. The Fraser River and its tributaries run along trails and can also pose serious threats to pedestrians and their furry friends, especially during spring run-off. It is easy for someone without river experience to look at a river and not understand its power or how dangerous it can become downstream. Never walk, play or climb on slippery rocks and logs near rivers and streams and stay away from riverbanks during times of high flowing water. The banks may have become unstable and can give way. Don’t underestimate and tread carefully while hiking.

For those comfortable fishing and wading knee- to waist-deep, it is important to recognize that the river is different during spring flows. It is surprising what knee-deep water can do when it’s running at a high level, and taking a swim in waders can be life threatening.

Spring run-off can be very exciting and quite unpredictable. Be safe out there!