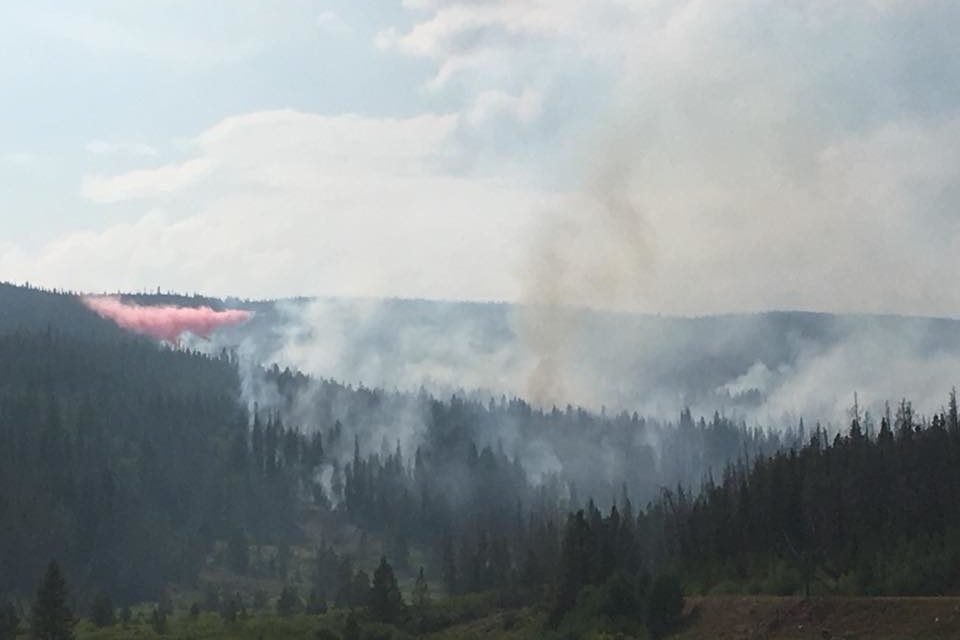 It has been a tense week in western Grand County as high winds and dry conditions caused the Silver Creek Fire to grow nearly three times its’ size in just a few days, moving closer to structures and forcing the evacuation of Latigo Ranch Monday afternoon. Residents of nearby Old Park and Gore Lakes were placed on pre-evacuation notice Monday, and an evacuation notice was issued Wednesday afternoon. Sheriff’s Deputies and Search & Rescue Teams took to the streets, going door to door to make sure that all residents were evacuated safely. 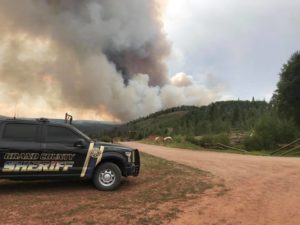 Grand County set up an evacuation point at the CSU Extension Hall to provide residents a location to receive information about the fire, the evacuation, and information regarding sheltering options available through the American Red Cross.

The Silver Creek Fire, located in west Grand County was first reported on Thursday, July 19, near the peak of Gore Mountain in the Sarvis Creek Wilderness and on the Routt National Forest. Caused by lightning, the blaze was burning in mixed conifer, including lodgepole pine, spruce, fir, and both live and beetle-killed timber. Fire managers implemented a full suppression strategy to fight the fire. At its’ origin, approximately 10 miles north of Gore Pass and Colorado Highway 134, access was difficult and firefighters were not able to safely fight the fire due to hazard trees.

Until Sunday, the fire remained relatively stable and was not threatening any structures. As drier, windier conditions moved in Sunday, the fire spread rapidly, growing to over 3,000 acres by Tuesday.

Grand County Sheriff and Office of Emergency Management officials, along with Silver Creek Fire officials, have been hosting nightly informational meetings at the Old Park Fire station, since pre-evacuation notice was given on Monday.

At the time of press, the approximate size of the fire was 4,100 acres and is reported at about 15% containment. The fire was burning within 6/10 of a mile of the Old Park subdivision.

Dozer lines have been constructed along the southeast and southwest flanks, as well as a contingency line to the west of the Old Park subdivision. Three helicopters assisted crews with water drops on hot spots; and single-engine air tankers and a large air tanker were utilized to drop retardant along the southern flank of the fire. Structure protection teams are in place in the Latigo Guest Ranch and Old Park area. Fire engines began overnight patrols of the Old Park and Latigo Guest Ranch areas Tuesday night.

Firefighters will continue to focus their efforts on improving and extending containment lines, with special emphasis on the southern flank of the fire. Heavy equipment crews continue construction of an indirect fireline along Forest Service Roads 250 and 100. A Type 2 Incident Management Team, Rocky Mountain IMT Blue Team, assumed management of the fire on Thursday morning, August 16th.

Updates on the Silver Creek Fire can be found at gcemergency.com and, at inciweb.nwcg.gov/incident/5985/. 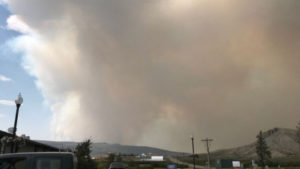 Smoke from wildfires continues to cover the valley and those with heart disease, respiratory illnesses, the very young and elderly are recommended to limit outdoor activities while smoke remains heavy. For more information, visit: co.grand.co.us/220/Public-Health.

It has been a devastating summer of wildfires across the country. According to the US Forest Service, 114 wildfires are currently burning on ~1.6 million acres of private, state, tribal, and federal land. More than 28,000 interagency fire personnel, including about 590 crews, 1,700+ engines, about 200 helicopters, and 24 Airtankers are deployed to fight wildfires.