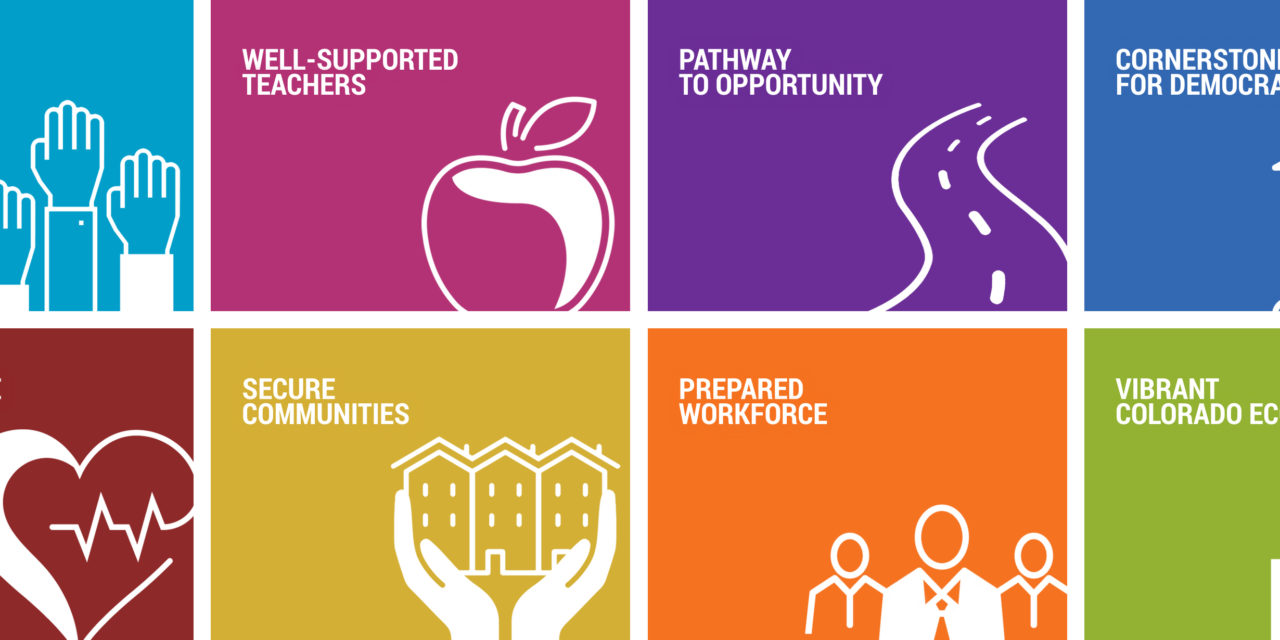 “It’s time to make a promise to the children of Colorado! We’ve been talking about education funding issues for years. In 2018, we have an opportunity. Initiative 93, entitled Great Schools, Thriving Communities is here!”,  Lisa Weil, Executive Director of Great Education Colorado.

School Funding issues have become a topic of concern for most communities throughout the US, as states balance their budget on the backs of the kids. Colorado is no exception and utilizes a negative factor for school funding to meet the needs of the state budget.

Just in the past four years, the state has cut school district budgets nearly $5.1 billion, using the “negative factor,” according to the Colorado School Finance Project.

The negative factor in the school funding formula allows the state to pay school districts less than the amount the formula calculates they should get, based on a cap the legislature sets each year.

In the 2014-15 fiscal year, the negative factor allowed the state to cut about 13 percent from almost every district’s calculated budget. In the 2016 school year, the cuts totaled $855 million.

“I think if we didn’t have the flexibility the negative factor allows us, we would be facing some very serious challenges in terms of the entire state budget,” Democratic Gov. John Hickenlooper said in a Denver Post interview. “If we had to compensate in the budget for the negative factor — in other words, take that money out of different sources like higher ed, health care, you go down the list — it would be a very very challenging exercise to do it.”

A couple of new strategies are coming to the forefront as educators, politicians and administrators realize we have to find a way to invest in our kids’ education without the ups and downs of legislative budget constraints. Frank Reeves, East Grand School Superintendent said, “We owe it to our kids, they are our future.”

According to Reeves, “Colorado currently ranks 42nd in the nation in per pupil spending”, which has negatively affected critical student services like special education and mental health. “In some cases, these programs have disappeared altogether, and our students deserve better.”

Superintendents from accross the state came together four years ago to identify the shortfalls and find what it will take to solidify the state’s needs.  Reeves said, “We have put together a solid funding formula. We know what it takes to teach our kids.” He added, “ We are educational experts, not the finance experts.”  The new formula, if passed, will “serve as a road map” for funding Colorado’s K-12 needs, according to Reeves. “We have it out there, they will send it back and we can refine the areas we need to work on.”

The proposed formula, if passed, would overhaul the way school funds are distributed, once the state acquires an additional $1.6 billion in education funding. Of Colorado’s 178 superintendents, 171 spent the past four years crafting the new funding model, including Frank Reeves, East Grand School District Superintendent.

Rep. Dave Young, D-Greeley, who sponsored the bill, requested the vote be delayed so superintendents could have time to craft amendments to the bill they introduced earlier this year to the Colorado General Assembly.

The bill would modernize Colorado’s school finance formula, which hasn’t changed much since it was enacted in 1994. The formula aims to more equitably distribute funds to districts that educate underserved and higher-need students. Reeves added, “Rural communities suffer because the educational cost per kid is higher.”

The new formula would:

The bill also allows school districts to decide on a local level what to do with the money they receive.

But there’s a catch: It won’t go into effect until the state funds education with an additional $1.6 billion.

That money could come from any source, but a ballot initiative called Great Schools, Thriving Communities, or Initiative 93, aims to meet the need. The Initiative is intended to build on the successes of Colorado’s public schools by expanding educational opportunities for students to prepare them for success in college, career and life. This initiative funds those expanded opportunities through tax increments on income earned above $150,000 and on corporations and ensures that decisions about how to use those new funds are made at the local level.

Ballot Initiative 93 has some creative answers and many believe that the Initiative is gaining the traction and support to finally solve the education funding woes for Colorado’s diverse palette of metropolitan districts and rural communities.  Lise Weil, Executive Director and Founder of Great Education Colorado, said, “We believe Colorado wants to give kids in every community the tools and education to be great contributors to our future”.

The Great Schools, Thriving Communities campaign was inspired by a diverse and inclusive coalition of education-connected organizations working to advance better and more equitable funding of public schools through a ballot initiative in 2018.

Weil added, “This is going to be a driver for economic development. Our hope is that everyone will take the time to look at the funding system and understand the different branches of this initiative”.  For the initiative to pass, the communities of Colorado need to come together on a local level and understand the intricacies of Ballot Initiative 93.

Grand County is going to hold the first educational event on April 12, in the East Grand School District’s Board Room, 299 County Road 611, Granby, at 5:30pm.

The kick-off will be introducing Ballot Initiative 93-2018.  County Commissioner Richard Cimino will be there to present the initiative, and, East Grand School District Superintendent Frank Reeves will be on hand to answer questions. More detailed information on Ballot Initiative 93-2018 will be presented at the kick-off.  Opportunities to sign the petition, as well as learn how to be a petition carrier will be available.

The purpose of the petition is to collect enough signatures to put the school funding question on the November 2018 ballot.  Supporting this petition will allow Colorado voters to decide if they want to better fund schools by raising state income tax.

We added a couple of documents to the online article and here are a couple of websites for a deeper dive into the funding initiatives details.