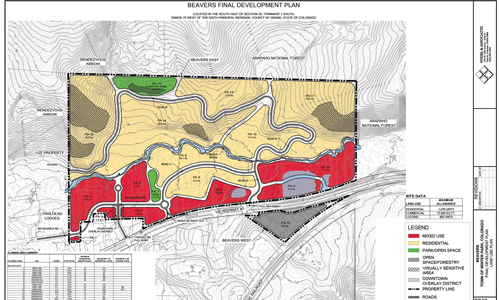 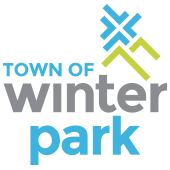 The 172 acre property is just south of the Town of Winter Park. The higher level FDP (consider it the project “Master Plan”) illustrates the developer’s overall plans for the property. Each separate plat will require individual review and approval prior to moving forward.  The majority of the property borders the VZF property to the north, Rendezvous Arrow and Arapaho National Forest to the east and south, and Highway 40 on the west.

Vogel described it as a “tale of two projects” with a mix of residential and commercial as well as wetlands and river access planning. The goal is to “practice avoidance”, as they do not want to impact the wetlands due to it being a big part of the property’s character.

Vogel described the Roam Project as creating a good opportunity for the Town of Winter Park. He stated that it “creates depth extending to the east with a grid that works with the Town’s Master Plan”.

The FDP’s Connectivity plan includes trails, promoting walkability for multigenerational use and Transit working in concert with the Town. The project extends the Fraser River Trail system. Roam will pay to construct a pedestrian bridge over the Fraser River, similar to what was installed by the Headwaters Center at the north end of town.  Local trails will extend to Porphyry Park and Rendezvous Arrow, as well as to the Arapaho National Forest. Roam will provide easements to the town to access trails and river frontage and this will be dedicated in the first plat filing

As development occurs, roads will be constructed in phases, with temporary turnarounds placed as necessary. This will disburse traffic along US 40, creating a parallel transportation access point.  East Grand Fire Department has been involved in the development process, and, ultimately, by connecting the road (B) with Rendezvous, it will provide an alternate method of getting through town to aid in the event of Highway 40 closure or congestion.

The Roam project is a 20 year “build out” with vested rights during this period. It includes access to 1,173 single family equivalent water taps, of which the Town currently has about 2,000 (managing the Fraser River responsibly).

After Vogel completed his presentation and answered questions, Community Development Director, James Shockey, presented the staff report to the Planning Commission. The final draft of the FDP had addressed many of the concerns previously expressed during meetings, and he went through each adjustment to the document. Discussion of several items ensued.

It was clarified that the project’s initial development will be in Planning Areas 1 – 4, located in the NW section of property. These sectors are dedicated for mixed use of commercial and residential construction in a more “urban” setting.

Once 200 units have been built on the east side of the development, they will work on the connection between Roads A and B. Plat submissions will include these details when they’re submitted. Access permits are required from CDOT, as dictated by traffic studies.

Roads A and B and Ski Idlewild/Vasquez Rd will be maintained by the Town once 25% of Certificates of Occupancy have been issued in that section. The Town has reviewed and approved the ability to manage snow removal within current structure.

Well and septic will only be an option for those in Planning Areas 11-15 in the east side of property, based on density and acreage. This is cost effective for the district. Properties must be a minimum of 2.5 acres and soil reviews must allow installation.  Access hydrants and/or a water tank are planned to ensure an adequate amount of water is available. This is subject to the approval of EGFD, the water district and future platting.

Concern about a proposed lodging structure being built at a 75 foot building height was expressed. For comparison, the Headwater’s Center and Fireside Market are 55’ tall. It was remarked that, with the land recessed below Hwy 40, it was felt that the 75 foot height would not appear as tall. Planning Areas 9 and 10 could accommodate a hotel and conference center, because they would need about 15 acres. Building height above 55 feet would require a variance from the Board of Adjustment, so that would be addressed during the plat filing process.

The 6 acre parcel across highway 40 to the west is included in the project, with no current plans for development.  However, they have determined that they could install one 35 foot wind turbine on the property and up to five residential units. Vogel acknowledged this to be a visually sensitive area and the intent is to make no skyline impact.

There will be two Metropolitan Districts established (due to a  different property tax rate): one, for the Commercial use district , and, a second residential district. This means there will be two separate boards and infrastructures.

During the revision process, the FDP removed the following from the list of uses:

The Planning Commission opened up for public comment and Winter Park resident, Gary Behlen, approached the commissioners. Behlen is a recently retired public works director for Erie, CO and had also worked for Carter Burgess (Engineers and Architects) and as City Engineer for the City and County of Broomfield.  He had recently written a letter to the Town expressing his concerns. He stated that he is in favor of annexing the property as a gateway entrance to town.  His concerns lie with the 20 year annexation and vesting and he questioned whether it is appropriate that the Town gets more clarification in the documentation. He also referenced Vogel’s description of 55-60% of the property’s undeveloped open space and felt that number should be added to the FDP.  He went on to state that all cost sharing and responsibility for expense should be outlined and, he felt that the parcels of land allotted to parks was not large enough. He stated that the expense for the parks should be borne by the developer. He also questioned funding origin for trails maintenance.

In response, Community Development Director, James Shockey, clarified that the 1% CRTA RETA is available to fund road and trail maintenance. Shockey also stated that, in the event an expense such as a traffic light becomes necessary, the Town and the developer will negotiate the financial specifics at that time.

The Planning Commission approved the FDP with the following conditions:

The Planning Commission’s recommendation will be given to Town Council at their meeting on February 6, and, public comment will also be heard during the meeting. Since Roam’s Master Utility Plan has not yet been approved, the Town Board final vote for approval will take place at the March 6th Council meeting.

It had been observed that the new Fireside Market currently has exposed dumpsters in the parking lot. Shockey confirmed that the enclosures are required and will be built in the spring. As for the temporary “Now Open” signage which has been in place for longer than a month, the Town will request removal. The Market’s new monument sign is now in place, so there’s no longer a need for the temporary signage.

Regarding signage on construction fences in town, several banners have been removed and the code will be addressed with developers.

The Planning Commission’s next meeting is scheduled for February 13. You can read more about the project on the Town’s website: wpgov.com