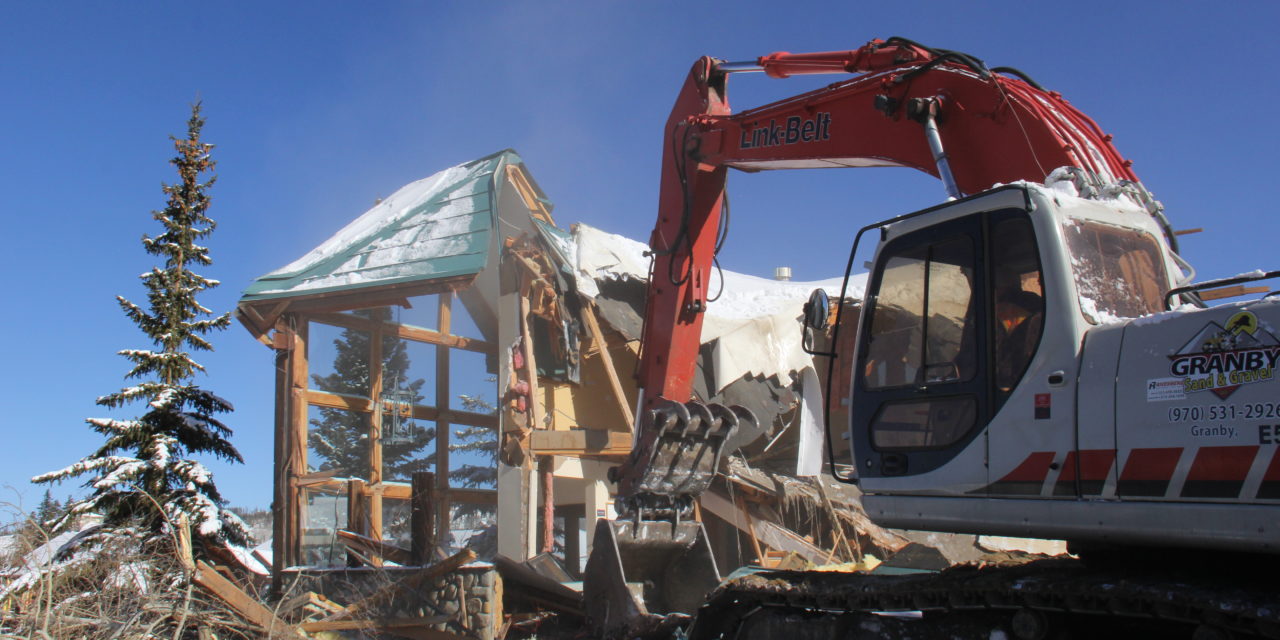 There is something to be said for scraping the earth clean and starting fresh. It has a cleansing component, almost like cleaning out the garage or the back room closet and then heading straight to the dumpster. No garage sale, no bartering, no muss, no fuss! Just crush it and haul it away.

But as I watched the final walls of the old Visitor Center in downtown Winter Park come down on Monday morning, I had to stop and wonder what history lay beneath the pile of rubble that was once an iconic building in the heart of our community?

It took most of the day for the crew from ATH Specialities out of Grand Lake to demolish the building, crush it up and haul it off (see the complete demolition video on the WinterParkTimes.com home page).

Several of us stood and watched as the final walls came down. Toward the end, as the teeth of the steel bucket took bite size chunks of the roof, we witnessed the building teetering, as the integrity of the structure became compromised. The old wrought iron chandelier, hanging from the ceiling of the glass tower, swayed back and forth as a last nod to a building that served our community for nearly 50 years. One final bite and it was gone.

The building has been home to meetings, information and teeth. Catherine Ross, Winter Park Chamber Director, said, “We are very excited to start a new phase of our evolution. The old Visitor Center was our home for many years, but the new facility will be a beautiful thing.”

The old building was completed in 1969. The upper level became the home of the Winter Park Water and Sanitation department until about 1990. During that same period, the lower level served as the local dentistry headquarters. Jim Myers, long time Winter Park resident, recalls his first memories of the building, saying ”you could get your teeth cleaned for 12 bucks”.  Myers added, ”I liked going there, because the dental hygienist, Mary Buchheister, was always very friendly.”

Three dentists actually occupied the building over the 20 year period. According to Myers, Dr Courtney Boxwell was the first to occupy the lower level, providing dentistry services for several years until Dr. Andrea “Andy” Appalonis took over the operation. In the late 80’s, Dr. David Lurye came to Winter Park, occupying the space for a short time before moving his practice to the Pine Tree Plaza, home to Winter Park Dental for close to 3 decades.

The Town of Winter Park purchased and renovated the facility in the early 90s where it has served for almost 30 years as the Winter Park Visitor Center and Chamber of Commerce offices. Monday was the start of something new and exciting for the town of Winter Park.

Rendezvous purchased the land and building from Winter Park as part of a $3.5 million agreement between Rendezvous and the town of Winter Park that included the naming rights of the Rendezvous Event Center at Hideaway Park.

The corner of Rendezvous Way and Hwy 40 will soon have a new look, as Rendezvous Colorado LLC begins construction on their new Sales Center and office complex, a multi purpose facility with adjacent townhomes and penthouse suites. The project is still undergoing its final planning phase, but recent renderings depict a modern new look for the project. Terry Stanford, Rendezvous Project Manager, said, “Todays demolition is just the beginning. It was exciting watching the old building come down”. Stanford stated the plan is to start on the new development in the spring and developers are targeting June 2020 for completion of the complex.