Perking Up the Fraser Flats 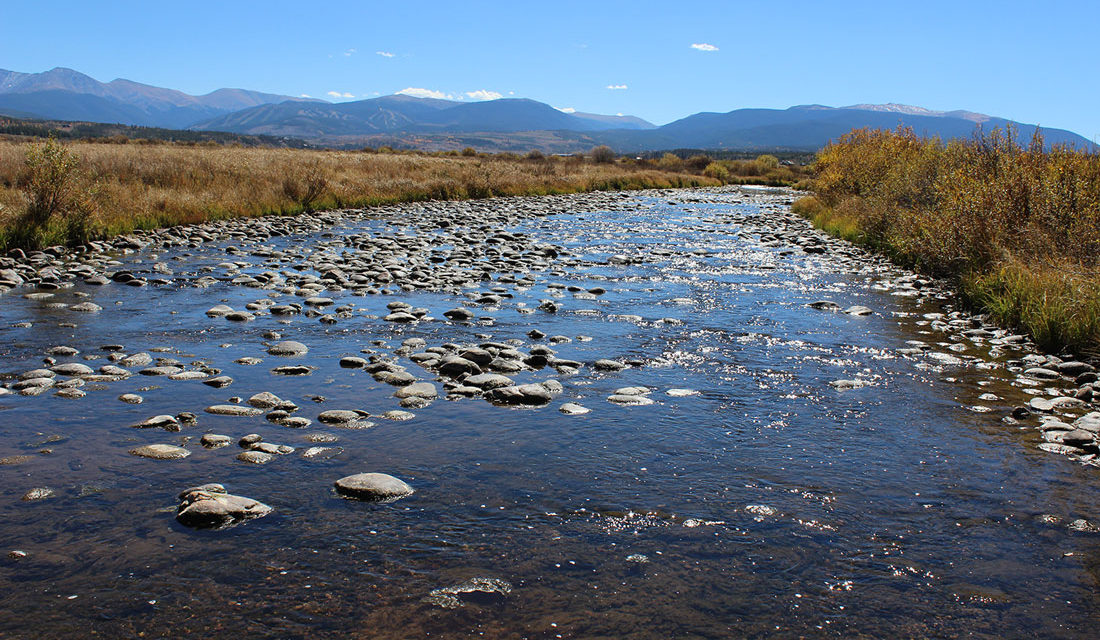 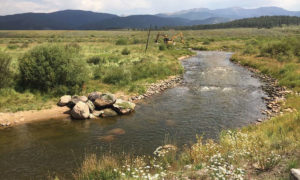 A cooperative group of East and West Slope water stakeholders, called Grand County Learning By Doing (LBD), is addressing the aquatic impacts of the water diversions from the county’s streams and river. Its pilot program, the Fraser Flats River Habitat Project, is a public-private stream restoration project now under construction to benefit river health on 0.9 miles of the Fraser River just above County Road 83.

Previously, flows on this section of the Fraser River were spread out from bank to bank in a wide channel. During the spring runoff this is a healthy situation with the river running deep and to its full width. But during the low flow months, after the snow has melted, the river remains just as wide, yet loses most of its depth. When this happens, the shallow river heats up rapidly on warm summer and fall days. Trout require a cold water fishery and higher water temperatures threaten their ability to live in the Fraser River.

Another problem with a wide shallow stream is that it no longer has its natural velocity. A slower moving river has more difficulty flushing the sediment that accumulates in the streambed. Sediment migrates into the Fraser River from roads, parking lots and soil disturbances caused by development. When the river loses its ability to keep the sediment moving, the fine materials fill the voids between the rocks were bugs live. As this happens, we see some species disappearing and others diminishing. Trout rely on the bugs as a food source. Trout also lay their eggs on the rocky stream bottom, and sediment it impacts their ability to spawn.

The Fraser Flats River Habitat Project creates a channel within a channel so that, while the existing channel can accommodate high flows during spring runoff, a narrower and deeper channel within the native riverbed can help stream velocity and lower temperatures during low flows in summer and fall. This low flow channel will have point bars that push the water into a narrower channel as the water levels drop. A point bar is an angled riverbed that allows the water to concentrate along its natural path (thalweg).

A healthy river also has a ratio of pool areas to riffle areas. The new low flow stream channel is constructed to keep the river at the proper ratio of riffles and pools for the river’s width. The riffle areas create perfect habitat for bug life, and the pool areas give fish cooler and deeper holding water.

When Colorado’s water law was written in the 19th century, it allowed for the natural flows of a river to be diverted out of its native channel. In the 1930s Denver Water started diverting water from the Fraser River. Today the organization takes over half of Fraser River’s waters through the Moffat Tunnel under the Continental Divide to help serve 1.4 million people in the Denver metro area. LBD’s Fraser Flats River Habitat Project is creating a Fraser River that can remain healthy with the lower flows associated with Denver’s need for a secure water supply.

Land use practices along the Fraser River in this area have also led to a loss of the vegetation that shades the river. The Colorado River Headwaters Chapter of Trout Unlimited oversaw a revegetation effort of the area last spring, planting over 3,000 willows and 100 cottonwoods along the riverbanks. 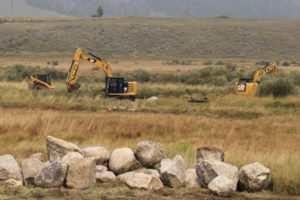 Starting in late spring of 2018, nearly half of the downstream project area will be open to public fishing on land owned by Grand County Water and Sanitation District that is leased by Grand County. The county is also constructing parking spaces alongside the county road.

This LBD pilot project is funded by a private landowner; Denver Water, Northern Water and Grand County — partners with Learning By Doing; and by grants, including Colorado Parks and Wildlife’s “Fishing Is Fun” program. The design and construction are provided by Freestone Aquatics.

Learning by Doing is already looking for its next project and the future of the Fraser River is looking better every day.

Check out the Video Feature on the restoration project here and on the Grand County TV 18 You Tube Channel.